Please ensure Javascript is enabled for purposes of website accessibility
Log In Help Join The Motley Fool
Free Article Join Over 1 Million Premium Members And Get More In-Depth Stock Guidance and Research
By George Budwell - May 16, 2015 at 9:02AM

Amarin Corp. and Arena Pharmaceuticals were once high-flying biotech stocks. Since the commercial launch of their respective flagship products, though, their shares have fallen in a big way. In this article, I consider which stock has the better chance of recapturing its former glory going forward.

The healthcare sector has given rise to several of the absolute best growth stocks over the past few years. Even so, some healthcare stars that skyrocketed at one point, later faded when their flagship products failed to live up to expectations.

Amarin (AMRN -3.52%) and Arena Pharmaceuticals (ARNA) are two of the better-known biotech stocks that saw their share prices soar heading into long-awaited regulatory approvals, only to subsequently collapse when the realities of marketing a novel drug came into focus: 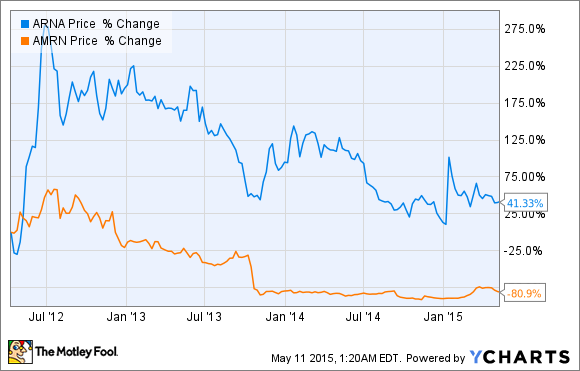 But given their lingering popularity among retail investors despite their underwhelming performance, I think it's worth considering which stock offers the better growth prospects going forward.

Amarin continues to fight the good fight for Vascepa
Amarin was supposed to blast off with the approval of its highly-refined fish oil pill Vascepa as a treatment for extremely high triglycerides back in 2012. The basic idea was that Vascepa should at least mirror GlaxoSmithKline's rival Omega3 treatment, Lovaza, in sales performance, but that never did materialize. According to Amarin's first-quarter earnings, Vascepa sales probably won't even hit $100 million this year, far off the blockbuster track.

The issue holding Vascepa back has been its inability to break out of the niche market of its approved label (severely high triglycerides) -- a trick that Lovaza clearly was able to pull off given its monstrous sales prior to losing exclusivity.

Amarin has thus been working vigorously to expand Vascepa's label. And the company's first attempt came and went with the so-called ANCHOR indication, which would have allowed the drug to be legally marketed to patients with only moderately high triglyceride levels.

But as the story goes, the Food and Drug Administration raised a number of questions about the ability of fish oil pills in general to reduce the risk of cardiovascular events, leading the agency to ultimately reject Vascepa's label expansion for the ANCHOR indication.

Amarin therefore needs to wait until its large cardiovascular outcomes study, REDUCE-IT, wrap ups in either 2017 or 2018 before reapplying for a broader label with the FDA.

That hasn't stopped Amarin, though. Last week, we learned that the company filed suit against the FDA, on first amendment grounds, to permit the off-label marketing of Vascepa. Specifically, Amarin wants to be able to inform doctors about Vascepa's ANCHOR trial results because it "may" lower the risk of heart attacks and strokes in patients with moderately high triglycerides.

Here's the kicker: I think Amarin has a really good shot at winning this legal battle against the FDA. Because it would be promoting the results of an actual clinical study and couching them in the terms of being "nondefinitive" at this juncture, it's hard to argue against that stance. It is a "true" statement after all, and a nearly identical argument held up, upon appeal, in the landmark narcolepsy drug, Xyrem, case last year.

Arena's fat-fighting pill Belviq is struggling to crack the huge obesity market
Meanwhile, Arena's story centers around its fat-fighting pill, Belviq (lorcaserin), approved by the FDA in 2012 and launched in the U.S. in June 2013.

Although the drug is approved only for severely obese patients or patients with one or more co-morbid conditions, this market was believed to be still large enough to push the drug toward blockbuster status almost out of the gate.

According to Arena's own projections, however, Belviq will probably end up falling short of $100 million in sales this year.

Management is thus hoping that a new extended release formulation of the drug called Belviq XR can help to drive sales higher in perhaps 2016, following a formal regulatory review.

The problem is that Belviq is starting to lose ground to newer FDA-approved diet drugs like Orexigen Therapeutics' (NASDAQ: OREX) Contrave, presumably because Contrave is simply more efficacious.

That's why Arena's management has been talking up the rest of the company's G-protein coupled receptor pipeline at recent investor conferences, even though they are mostly confined to either early stage or preclinical studies at present: 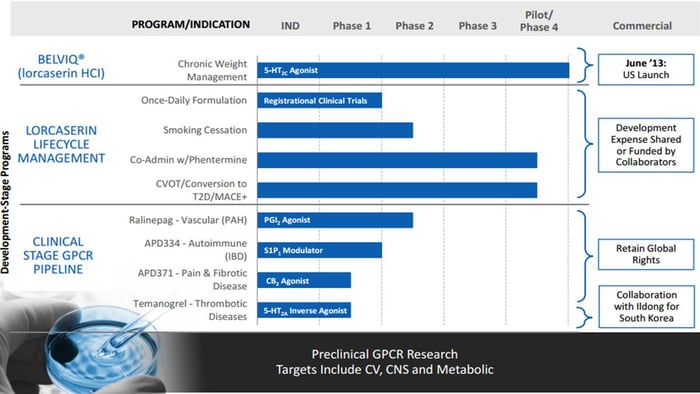 All told, Belviq's blockbuster aspirations appear to be a pipe dream at this point, and investors should therefore begin looking at the company's other clinical candidates for reasons to hold onto their shares.

Is Amarin or Arena the better growth stock?
This is an interesting comparison because neither stock is without significant risk. Amarin's saving grace appears to be that it has a decent shot at winning its latest legal battle against the FDA, and Vascepa sales have been growing at a respectable clip for its initial indication.

The same can't be said for Arena's Belviq. The drug is probably on track to top out at $200 million in sales, most of which will end up in Eisai's pocket per its marketing agreement with Arena.

That puts the onus on Arena's clinical pipeline to create value for shareholders moving forward. Unfortunately, the biotech's pipeline, outside of lorcaserin, won't produce any late-stage candidates anytime soon.

So, I have to give Amarin the nod here. At the end of the day, I'd say it has the better shot at becoming a cash flow positive operation within the next five years, and there's no guarantee that Arena's pipeline will ever produce another viable drug candidate.