Will a deal finally materialize?

The New York Post reports that microprocessor maker Intel (INTC -0.80%) and programmable logic vendor Altera (NASDAQ: ALTR) have resumed acquisition talks after prior discussions had fallen through. The Post, citing a source with "direct knowledge of the talks," says that a resolution could be coming within a "few weeks."

Altera being forced back to the negotiation table?
According to Reuters, Intel had "discussed offering $58 per share" for the company but brought that amount down to $54 per share once it had a closer look at "non-public information, including [Altera's] outlook."

Altera, as is widely known, is said to have rejected that $54 per share offer.

After the news broke that Altera turned down the offer, a number of shareholders were unhappy. Bloomberg reports that TIG Capital and Cadian, which own 1.5% and 2.8% of outstanding shares, respectively, "sent letters to [Altera's] management, urging them to return to the negotiating table with Intel Corp."

TIG even went so far as to issue a press release urging other Altera shareholders to vote against re-electing Lead Independent Director T. Michael Nevens in a bid to "demonstrate their frustration with the Board and desire for the Board to pursue the Intel offer."

Is this the best Altera is going to get?
TIG quoted a number of Wall Street analysts who seem to agree that the $54 per share offer was quite attractive relative to what Altera could achieve by going at it alone.

For example, according to Baird Equity Research, in order for Altera to see its share price rise to the mid-$50 range without a buyout, it would need to bring in $2.70 per share in earnings. For some perspective, analyst consensus calls for Altera to bring in $1.25 in earnings this year and $1.56 next year.

The Baird report says that this is "unlikely to happen over the next few years given the outlook for a secular decline in worldwide base station deployments in 2016 to 2019 until 5G starts ramping." 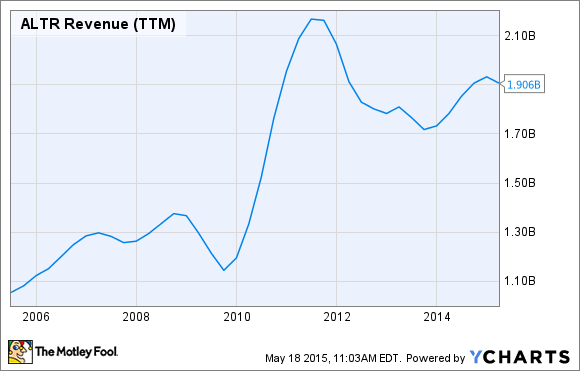 Finally, a Citigroup research report says that Altera "has had a history of overestimating its growth rate." The company, according to Citi, says that it can double the growth of the overall semiconductor industry, but it has actually outgrown the industry by just 1% (per Citi's metrics).

Could a rumored Xilinx buyout make Altera more amenable to acquisition?
Reuters recently reported that Avago, which has been on an acquisition spree, reached out to three "potential targets" including Xilinx. If Avago were to purchase Xilinx, then Altera would need to compete with the combined entity, which would likely present a more formidable company.

In that case, it might be in Altera's best interest to operate as a part of the much-larger Intel than on its own. It is worth noting, though, that Reuters says none of the three "approaches" has resulted in "advanced deal discussions."