Please ensure Javascript is enabled for purposes of website accessibility
Log In Help Join The Motley Fool
Free Article Join Over 1 Million Premium Members And Get More In-Depth Stock Guidance and Research
By Anders Bylund - Jun 5, 2015 at 10:53AM

Why is Intel paying $16.7 billion for Altera when it might have bought larger rival Xilinx for less? Hint: buyout price tags aren't set in stone.

Sometimes, the rumor mill gets it right. Maybe not right away, but in due time.

That's the story behind Intel's (INTC 0.32%) $16.7 billion buyout of fellow semiconductor designer Altera (NASDAQ: ALTR). There were rumblings about this deal in late March and again in late April, but they faded away into nothing both times. The usual anonymous insider reports pointed to a difference of opinion on Altera's price tag.

The rumors resurfaced again in the past week, and the third time was the charm. Intel will indeed grab Altera wholesale for $16.7 billion, using a combination of cash reserves and new debt. Both companies' boards have approved the deal, which now must overcome the usual shareholder votes and regulatory approvals. If all goes as planned, Intel will own Altera in six to nine months.

The semiconductor industry has been consolidating rapidly lately, and Intel's big buy isn't even the largest acquisition of the last month. So it's no surprise to see Intel reaching for the checkbook. But why did the chip giant focus on Altera, and why now?

What Intel says
According to Intel's press materials on the buyout, Altera's technologies will help Intel prolong the Moore's Law maxim. For those unfamiliar with Moore's Law, it's the idea that the number of transistors in semiconductor circuits should double roughly every two years, leading to improved performance and efficiency.

Furthermore, Altera's programmable chips should give Intel another foot in the door to the booming Internet of Things market where on-the-fly chip tweaks can pay big dividends.

If that weren't enough, baking Altera's programmable logic circuits into Intel's own Xeon products could give data center operators a quick, custom speed boost for the business processes that need it most. A partly reprogrammable Xeon would be able to optimize itself for database management, or specialized data analysis, or whatever task is thrown its way. All of this would be done without buying and installing new chips -- you would just remap the circuits on the basic Xeon, like you'd do with a programmable Altera product today.

Intel expects the merger to create shareholder value immediately, adding to free cash flow and adjusted earnings in year one. The companies have been working together for years, and Intel factories started building some of Altera's chips in 2013. This close partnership sets the companies up for a relatively quick and easy integration. In particular, cost savings and increased efficiency in Altera's manufacturing flow look like low-hanging fruit.

For one, Xilinx potentially could have been a cheaper acquisition. Altera's enterprise value, admittedly boosted by Intel's takeover interest, stands at $13.3 billion today. Xilinx stops at just $10.5 billion, leaving more room in Intel's buyout budget for champagne and lobster burgers. Or, you know, the option to take out smaller loans to finance the takeover.

Also, Xilinx is by far the larger presence in the market for programmable logic devices. This overview actually came from Intel's explanation of the Altera deal: 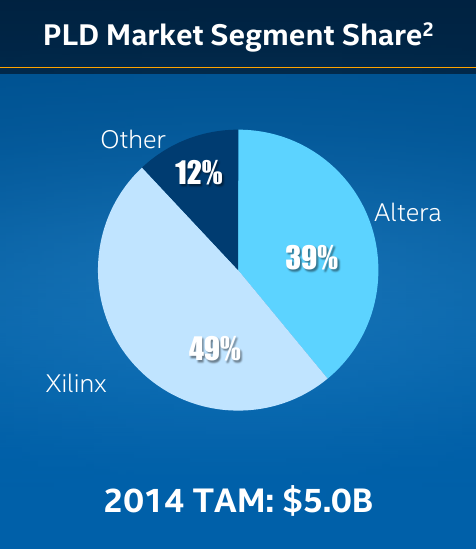 So Intel potentially could have paid less for a more dominant programmable chip expert. Moreover, Xilinx is a better-run company with a higher operating margin and stronger returns on equity. In short, Xilinx seems to offer a better return on Intel's investment and a clearer path toward higher profits.

But Xilinx doesn't have the history of partnering with Intel that Altera offers. The early groundwork has been laid for an intimate relationship, and Intel should know Altera's business like its own navel lint. That's an important value driver, and perhaps enough to give Altera the upper hand in Intel's eyes.

Finally, it's entirely possible that Intel approached Xilinx with a buyout offer, but was rebuffed with a much higher price in mind. You've seen the difference between Altera's and Xilinx's programmable market shares, and Xilinx runs a tighter operational ship. Nevertheless, Altera's shares command higher valuation multiples, and not just amid Intel's rumored (and then actual) buyout interest: 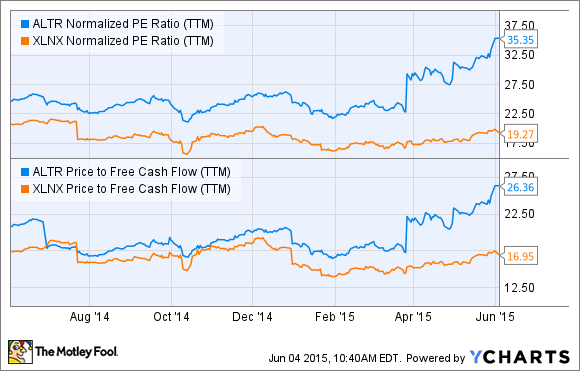 You can't blame Xilinx management for holding out for a bigger payoff.

At the end of the day, I think Intel made a sensible choice here. Altera's expertise gives the chip giant new avenues into the Internet of Things and boosts Intel's already dominant data center business.

Xilinx might have been an even better idea, but perhaps a much more expensive deal with a rougher merger integration road map. Sometimes, a compromise is the best available choice.

That's what Intel is hoping for here, and for good reason.