Please ensure Javascript is enabled for purposes of website accessibility
Log In Help Join The Motley Fool
Free Article Join Over 1 Million Premium Members And Get More In-Depth Stock Guidance and Research
By Daniel Miller – May 19, 2015 at 3:20PM

Let's take a look at two analyst opinions on TrueCar, and figure out how appropriate B. Riley's price target of $10 really is.

While Wall Street's quarterly forecasts and estimates often prove to be of little value to long-term investors, analyst upgrades and downgrades can be a source of useful insight into a company's stock. Multiple Wall Street analysts initiated coverage of TrueCar (TRUE -0.40%) last month, and with wildly different opinions. Let's look at two in particular, from analysts at B. Riley and Goldman Sachs, to see what all the fuss is about.

On the bright side
Analyst Debra Schwartz at Goldman Sachs upgraded TrueCar in late April to a Buy rating with a price target of $22. That's encouraging news, as Schwartz sees TrueCar as having nearly 50% upside to its current stock price of $14.90.

"The stock is down 32% YTD on increased seasonality of the business, decelerating SAAR and a lock-up expiration. We believe this has created opportunity ahead of the favorable summer months and new product launches. TrueCar is driving faster-than-expected share of the 16.5mn new car sales, which will likely accelerate as marketing and product initiatives progress throughout the year," said Schwartz, in a note to investors.

On the downside
However, not all onlookers were in agreement, as analysts at B. Riley initiated coverage of TrueCar in April at a Sell rating with a price target of $10.00.

"While the value proposition exists, our thesis is that the company's core business -- enabling vehicle sales through dealers -- is slowing materially as TrueCar achieves peak dealer penetration and slowdown in units sold per dealer." Noted B. Riley analysts in a letter to investors. "Additionally, the highly competitive nature of the industry and TrueCar's attempt to increase mindshare should keep advertising, revenue share, and product development expenses high, reducing operating leverage potential."

What a Fool believes
Now that TrueCar's first-quarter is in the books -- it reported results after B. Riley's note to shareholders -- how are things shaping up?

B. Riley analysts' view of slowing core business appears to be off base. Despite TrueCar's nearly hitting its goal of growing its dealership network to one-third of the dealerships in the U.S. automotive industry, it is still adding partners at a healthy clip. In fact, during the first quarter TrueCar added an impressive 607 dealers, good enough for a company record. That was an impressive figure, and investors should expect that quarterly number to check in between 150 and 300 in the quarters ahead, which is still healthy.

Also mentioned in B. Riley's letter was that the slowdown in units sold per dealer is a concern. In reality, the graph below shows consistent progress over the previous two years, and indicates that the slowdown may only be due to seasonality -- quarters two and three are the strongest in terms of revenue generated. 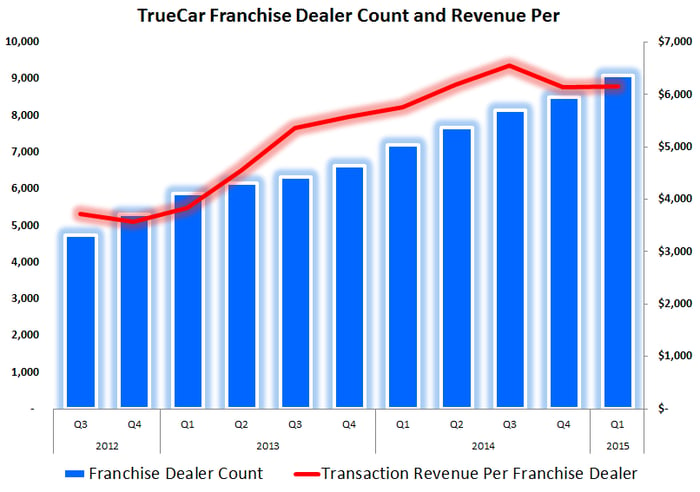 In addition to that counter argument, investors should also consider two additional points:

First, even if TrueCar stops adding dealerships to its network entirely, growth can still be had by simply increasing brand awareness and thus the likelihood of more completed transactions. Consider that TrueCar only generates 3.9% of the industry's vehicle sales as of the first-quarter. As advertising grows TrueCar's brand presence, there is plenty of room for increased market share and revenue growth.

Second, in addition to growing its market share, TrueCar's monetization -- how much revenue it generates per transaction -- was at an all-time high of $322 in the first-quarter. While marketing and product development costs will likely remain high in the near-term, as B. Riley mentioned, that doesn't tell the full story. Consider that TrueCar's acquisition cost per sale checked in at $194, which was a 4% improvement from the previous quarter.

Ultimately, on the back of a record 5.5 million unique users on TrueCar's website in the first-quarter, the company posted a 34% year-over-year increase in units sold, a 36% increase in revenue, and a 26% increase in market share. Despite B. Riley's discouraging note to shareholders, it seems difficult to argue that TrueCar's core business is slowing.

Daniel Miller owns shares of TrueCar. The Motley Fool recommends TrueCar. We Fools may not all hold the same opinions, but we all believe that considering a diverse range of insights makes us better investors. The Motley Fool has a disclosure policy.

Expect More Pain for TrueCar After Its CEO Departs
356%