Please ensure Javascript is enabled for purposes of website accessibility
Log In Help Join The Motley Fool
Free Article Join Over 1 Million Premium Members And Get More In-Depth Stock Guidance and Research
By George Budwell - May 23, 2015 at 12:03PM

The Soros Fund Management sold Kite Pharma, Valeant Pharmaceuticals, and Teva Pharmaceutical Industries Ltd. in the first quarter. Should you follow in its footsteps?

With a net worth that reportedly tops $23 billion, the controversial billionaire George Soros is the world's richest hedge-fund manager. Over his career as a money manager, Soros has averaged returns that exceed 20% on an annual basis, leading not only to his substantial wealth but making him one of the most-closely watched superinvestors in the process.

Last week, the quarterly 13F filings showed that the Soros Fund Management sold off, or reduced its stake, in the healthcare stocks Kite Pharma (NASDAQ: KITE), Valeant Pharmaceuticals (BHC -3.06%) and Teva Pharmaceutical Industries (TEVA 1.08%) in the first quarter of 2015. Given the fund's long-track record of success, let's consider if retail investors should follow suit.

Kite Pharma has had an incredible run since its IPO
The cancer immunotherapy company Kite Pharma saw its shares blast off following its IPO last year. However, the company's shares have pulled back in a big way after Novartis AG's rival CAR-T program failed to show any clinical benefit for solid tumors in a small early-stage study. 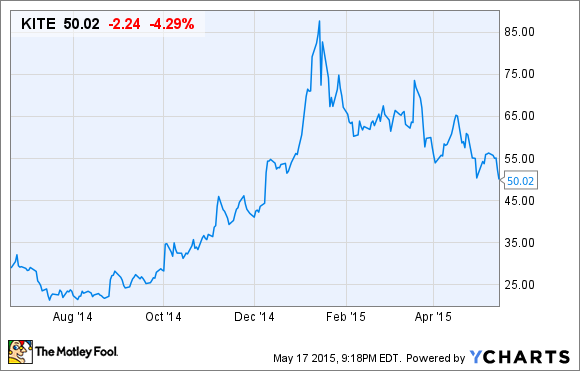 While these results should probably be taken with a massive grain of salt given the small sample size, the thinking on the Street right now is that CAR-T cells will probably be most effective as treatments for various blood disorders.

The good news is that blood disorders still represent a multibillion dollar market. But investors were hoping that CAR-T cells could one day become a broad-based cancer treatment.

In the first-quarter, Soros reduced his position in Kite by roughly 3%. As the fund seems to have opened this position at or close to Kite's IPO at around $25 a share, I view this minor reduction in its stake mainly as a profit-taking maneuver, meaning that it's probably unrelated to how the fund thinks CAR-T cells will ultimately perform in solid tumors.

Valeant Pharmaceuticals has been an amazing growth story
Valeant's strategy of buying rival drugmakers like Bausch & Lomb has driven its revenues and share price through the roof over the last five years: 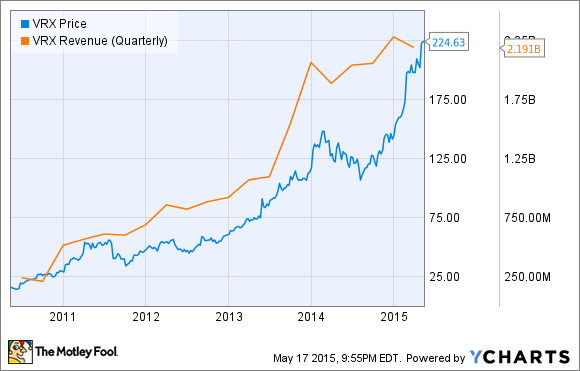 What really sent shares soaring over the last year, though, was the company's interest in buying Botox-maker Allergan. The Soros Fund, for example, increased its position in the drugmaker ahead of this deal -- as did many other institutions.

So it shouldn't be surprising that Soros sold his entire stake in Valeant in the first-quarter after the company lost Allergan to Actavis (AGN).

At this point, Valeant's shares look grossly overvalued with a price-to-earnings ratio of 75, but the drugmaker is expected to ramp up its earnings this year by nearly 200%. Perhaps more importantly, this growth should be sustainable with earnings estimated to grow by 27%, on average, over the next five years.

Soros exits Teva
Not long ago, Teva was the Soros Fund's largest position. The patent expiration of the generic and specialty drugmaker's flagship multiple sclerosis drug Copaxone, though, has led the fund to slowly reduce its stake. And per the first quarter's 13F filings, we learned that Soros dumped all of his remaining shares.

I find this large sell-off by a major stakeholder to be a troubling sign for Teva going forward. Sandoz has reportedly obtained final approval of its ANDA for a generic version of the once daily Copaxone 20 mg/mL formulation. Teva's "dosing defense" against generics, in which a higher dose that can be taken less frequently is employed in hopes of retaining market share, will now be put to the test.

Unfortunately, I think payers are going to overwhelmingly favor cheaper generics in this case, given that a higher dose doesn't provide any additional clinical benefit. In short, payers probably won't authorize the use of a far more costly branded version simply because it is more convenient.

Should you sell these stocks?
My view is that Kite and Valeant are both probably going to turn out to be winners over the long haul. Kite has a strong clinical pipeline that should produce at least one blockbuster drug, and Valeant's aggressive approach to M&A should help to bridge its present valuation gap down the road.

Teva, on the other hand, looks like a strong sell. There's no way to tell how effective the company's dosing strategy for Copaxone will be, and management's interest in mergers with competitors like Mylan, aren't exactly exciting from a value creation standpoint.

All told, it's my personal opinion that investors would be best served by standing pat on Kite and Valeant, but taking a cue from Soros on Teva.