You don't have to own restaurants to become a wealthy chef these days. Rachael Ray is proof of that.

From her beginnings as a cooking instructor at a local market, Ray has climbed the ladder with savvy business acumen to become one of the wealthiest chefs in the world. She got her start when an upstate New York CBS (NASDAQ:VIAC) affiliate invited her to host a weekly cooking segment on the local news. She caught the eye of some execs at Scripps Networks (NASDAQ:SNI), who invited her to host a show on Food Network based on her 30-minute meal concept. 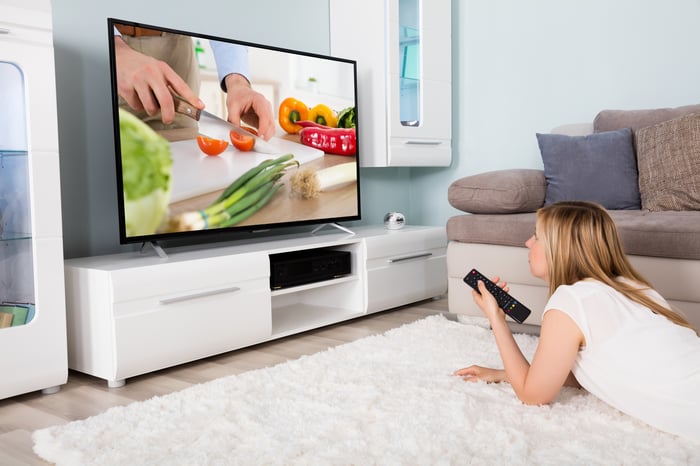 Fourteen years later, Rachael Ray has accumulated three daytime Emmys for two different shows (30 Minute Meals and Rachael Ray) and a library of New York Times best-selling cookbooks. When you add up her income from her television contracts with Scripps and Harpo Productions (Oprah's production company) and her book sales and endorsement royalties, Rachael Ray is worth $60 million, according to TheRichest.com.

Where did all that money come from?
Rachael Ray is most well-known for her show 30 Minute Meals on the Food Network. That show was a launching point for several other shows starring Ray including $40 a Day, Rachael Ray's Tasty Travels, Rachael Ray's Week in a Day, and Rachael vs. Guy: Celebrity Cook-Off.

Most importantly, it helped Ray launch her own syndicated talk show produced by Harpo Productions and CBS subsidiary King World. Not only does that daily talk show -- on air since 2007 -- provide another source of income for Ray, it provides a launching pad for her newest cookbook or endorsed product. Ray's talk show is as excellent as it is popular, receiving two Daytime Emmy Awards for Outstanding Talk Show in 2008 and 2009 and eight total Emmy nominations.

Ray's cookbooks provide an ample source of income for the celebrity chef. Her last six cookbooks have reached The New York Times' best seller list within one month of their release. Overall, her cookbooks have earned her an estimated $8 million. She also launched a magazine in 2005 called Every Day With Rachael Ray. The magazine includes recipes, party ideas, and other lifestyle articles.

On top of all of her work in media, Ray has also licensed her name and brand to several home products including linens and kitchenware. She signed an endorsement deal with Nabisco in 2006, providing recipes on the back of the box of several Nabisco products. She also endorsed Dunkin' Donuts (NASDAQ:DNKN) in 2007 as she's noted she can't make her own coffee (or bake) since it requires measuring. That same year, she signed a deal with AT&T (NYSE:T) to provide "Recipes on the Run" to wireless subscribers -- which was a great deal for Ray, and not as great for AT&T.

Ray also has a line of dog food, Nutrish, but all proceeds go to her charity to rescue at-risk animals. Ray also has an entry in the Oxford American College Dictionary for "E.V.O.O.", but doesn't receive any royalties from that.

Bringin' home (and cookin') the bacon
Forbes estimates Rachael Ray's income in 2008 at $18 million, and it increased it to $25 million in 2012 when it published an update to its wealthiest chefs feature. Only Gordon Ramsey earned more that year -- $38 million. Her yearly income since 2007, the year she started her talk show, has likely ranged from $15 million to $30 million based on how many shows she's doing and cookbooks she published.

Remember, though, the government takes a good chunk out of Ray's income for taxes, and she donates a lot to charity. Still, $60 million may be on the conservative side of Rachael Ray's net worth. If she has a good financial advisor and made sound financial choices, there's no reason her net worth shouldn't be higher considering most of her wealth was generated after the start of one of the biggest bull markets of all time.