Please ensure Javascript is enabled for purposes of website accessibility
Log In Help Join The Motley Fool
Free Article Join Over 1 Million Premium Members And Get More In-Depth Stock Guidance and Research
By Travis Hoium - May 23, 2015 at 9:00AM

Atlantic City is falling apart before our eyes, so why hasn't Las Vegas been subject to the same fate?

The Strip's constant reinvention has kept it a step ahead of competing cities for entertainment. Image: The Motley Fool

Las Vegas seems to be on a slow but steady recovery from the recession of 2008. Parties are hot again, gamblers are back, and there's even a new resort being built on the Las Vegas Strip.

Meanwhile, on the East Coast, Atlantic City is slowly shutting down. Four of the city's 12 casinos shut down in 2014, including one from Caesars Entertainment (CZR), and billionaire activist-investor Carl Icahn has threatened to close another resort if a union gets health insurance and pensions reinstated.

How did these two gambling destinations land on such different paths?

We've lost that loving feeling
Atlantic City was once the go-to for East Coast residents who just wanted to get away for the weekend. A big driver of the city's gaming success was the sheer density of people within a drive from its hotels. Gaming grew from nothing in 1977 to $5.2 billion in 2006, only to be stopped in its tracks by the recession and growing competition. 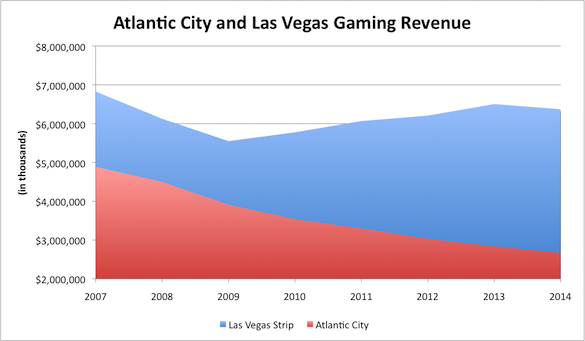 While Las Vegas was hurt by the recession, you can see that gaming revenue returned slowly as the economy improved. In Atlantic City, the story was very different.

Casinos are everywhere
The biggest problem Atlantic City has is that gaming has become more prevalent over the last decade. Pennsylvania allowed casinos to open, including one from Las Vegas Sands (LVS -1.06%), gaming expanded in Connecticut, and even New York and Massachusetts decided to allow gambling. Suddenly, the density of population that worked in its favor in the '80s and '90s was a detriment because it wasn't the same destination that it once was.

Gaming is no longer a novelty on the East Coast; it's commonplace and if you want to play at the slots there are probably much closer options for most residents. Without something to draw travelers, there was nowhere for Atlantic City to go but down.

The ability to adapt and evolve
Las Vegas' success isn't so much due to its ability to attract gamblers, but rather its ability to remain a vacation destination. It's a chore for most people to get to Las Vegas, but it's a draw because people go just as much for shopping, partying, restaurants, and shows as they do for gambling. Investing in these kind of attractions has separated Las Vegas from Atlantic City.

For example, Wynn Resorts (WYNN -0.72%) and Las Vegas Sands, which operate the two most profitable resorts in Las Vegas, generate far more revenue off of the gaming floor than they do from gamblers. So, it's actually nongaming that draws visitors, which in turn brings gaming industry profits.

Learn a lesson from Atlantic City
A decade ago, not many people would have predicted the dramatic fall of Atlantic City. But being a destination city only works when you're the best option around. When you lose that edge the profits can dry up quickly.

Las Vegas doesn't have the same benefit of tens of millions of people living close, so it has to constantly reinvent itself. Whether it's tearing down old resorts to build new ones or building new nightclubs and pool parties, the evolution never ends. That's what has kept Las Vegas on top and one factor that drove the bankruptcies we've seen in Atlantic City. For investors, it's a lesson that reinvention is good, especially in the fast paced gaming industry.