Please ensure Javascript is enabled for purposes of website accessibility
Log In Help Join The Motley Fool
Free Article Join Over 1 Million Premium Members And Get More In-Depth Stock Guidance and Research
By Travis Hoium - May 23, 2015 at 6:00PM

Who says energy innovators today have to play by yesterday's rules?

The energy industry hasn't changed much over the past 100 years. We're still driving cars powered by gasoline and electricity still runs on natural gas and coal, through the utility's power lines, to our homes and businesses.

Yet innovation is happening in energy faster than at any point in the past century. Solar panels will be on 1 million U.S. rooftops by the end of the year, energy storage is now a viable option for consumers, and even electric vehicles are becoming an attractive option for some car buyers.

Still, I think it's time to change the way we think about energy altogether. Is this really how we would power the world if we started from scratch today?

Solar farms built in the middle of the desert are the most efficient way to use the sun's energy. Source: First Solar.

Today's innovations answer yesterday's problems
In following renewable energy, and the solar industry in particular, most of the business models and policy debates that happen in the industry start from where we are today. Rooftop solar is being challenged because it has to tie into today's grid to be economical. Utility-scale solar has problems because it's an intermittent source on today's grid. Energy storage is needed to make wind and solar base load sources given the way the grid works today.

All of these things assume one basic thing. We need the electric grid to power the country, and the world. Has anyone asked a simple question: Why?

Tomorrow's energy challenges
What if we thought about energy differently? What if we broke it down into simple pieces we could solve one by one?

We know that solar energy is the most abundant energy source in the world, by a long shot. In one hour, enough solar energy hits the earth to power every home, business, car, bus, and anything else that uses energy for an entire year. The most efficient place to build solar generators are in sunny deserts in the Southwestern U.S., Northern Africa, or the Middle East. Here, we've already seen unsubsidized energy costs of $0.06 per watt for solar energy, and that number is falling constantly.

What we don't have is a way to get that cheap energy from the places it's generated most efficiently to consumers where they consume energy. The grid is fine for electricity being consumed at the same time it's generated, and in a relatively small radius of that generation, but we need to be able to store and transport energy thousands of miles to create a truly renewable economy. I think that will be the biggest challenge and opportunity of the next 25 years.

Identifying the problem is the easy part
Thousands of people are working on the energy storage challenge worldwide, so I'll highlight just a few of the plausible options.

Elon Musk thinks he has energy storage solved with Tesla Motors' (TSLA 4.67%) Powerwall and Powerpacks. Along with dozens of other companies, he's working to lower the cost of batteries to the point that they can be incorporated into homes, businesses, and the grid to provide enough storage for the world to be powered by only renewable energy. Depending on how the system is designed, this could reduce the need for peak power and allow for more low-cost renewable energy in locations where it's economical to build. But it doesn't do much to change how energy is transported. 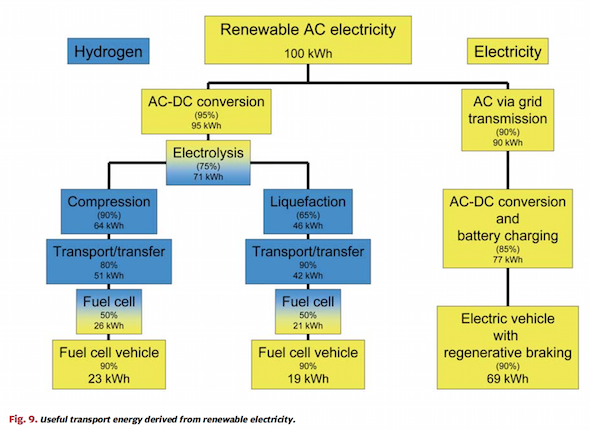 Source: Does a Hydrogen Economy Make Sense? by Ulf Bossel.

The hydrogen economy has long been a dream of engineering types (like me) because hydrogen can be created with little more than electricity and water. When consumed in a fuel cell, the byproduct from turning hydrogen into usable energy is just water. For decades, it's been little more than a pipe dream, but now it may be inching closer to reality. A study by fuel cell expert Ulf Bossel in 2006 projected that turning electricity into hydrogen and back into usable energy again is only 23% efficient, which, at that time, made it uneconomical. But at $0.06 per kWh for solar electricity, that would translate to about $8 for a gallon of gas equivalent in hydrogen. Considering the fact that the solar industry has lowered the cost of utility-scale solar energy by 60% in just five years, this technology could have legs if enough R&D dollars are put into it.

The University of New South Wales recently published a report saying that its produced a more efficient electrode for electrolysis to create hydrogen, a key step in improving the efficiency of the process shown above. If we could create hydrogen efficiently, then we could easily transport it around the country, and world, in the way we move natural gas and oil every day.

Maybe hydrogen isn't the answer; maybe it's another easily transported energy storage medium. But we need to start thinking about ideas like this if the future is truly going to see an energy revolution.

Time to think outside the box
If energy is truly going to change the way we live in the next century, I think we need to stop being tied to the infrastructure that made energy work in the 20th century. It's time to move to new ways of creating, transporting, and consuming energy. Maybe that's with chemical batteries, maybe it's with hydrogen, but if we're tied to the grid as it's constructed today, I think the energy industry is going to limit its own innovation in the future.

More companies need to think outside the box to break the hold utilities and Big Oil have on energy today.