If it seems like campaign season starts earlier with each presidential election, you're probably right. Nonetheless, we're currently a little more than 14 months from the date at which Americans will go to the polls to decide who will become the 45th president of the United States of America.

Election season is often marked by a heightened number of political ads, which nowadays are more focused than ever at getting your attention. Gone are the days where billboards and TV commercials did all the work for campaigning candidates. Now you'll see ads reaching for your attention on social media that are more targeted than ever.

However, those ads are only effective if campaign leaders and candidates understand what's important to the American people. This is where surveys and polls come in handy.

This issue will likely dominate the 2016 elections
A new survey from Gallup that was conducted earlier this month asked more than 1,000 U.S. citizens the following question:

The questions were randomized, and eight issues were presented to respondents:

Specifically, Gallup was looking for issues labeled as "extremely important" or "very important" by respondents. While not a single issue scored below 55% in the combination of the aforementioned two categories, implying that all eight issues hold some significance in the 2016 elections, one truly stood out from the crowd.

According to Gallup's findings, "the economy" continues to top the list as Americans' most important issue in the upcoming elections. Six out of every seven (86%) people surveyed labeled the economy as being an extremely important or very important issue. Coming in a somewhat distant second with a combined 77% were "healthcare policy" and "the way government operates in Washington."

Now, let's get something clear from the get-go: The economy taking the top spot isn't a huge shock. In fact, the economy is typically the top issue in just about every presidential election in the United States. What's so remarkable about this survey was just how far ahead of the other issues the economy is in terms of response importance, especially when you take into account the idea that the unemployment rate shrank in April to 5.4%, the lowest level since May 2008.

Why the economy remains the most important issue
With the U.S. economy back on track and the Federal Reserve seemingly on the verge of lifting record-low lending rate targets, you might be wondering why the economy continues to be the top issue Americans care most about. In reality, there are a number of problems Americans are currently facing that remain directly tied to the health of the U.S. economy.

While often described as a middle-class problem, wage growth in the U.S. has been anemic for the past five decades. On a nominal basis, you'd probably think I'm nuts, since hourly wages have risen more than 725% between 1964 and 2014. Although it may feel like you have more money than you did a decade ago, average real hourly earnings, or what the average American is making per hour in constant dollars when inflation has been factored in, has risen by less than 8% over the past 50 years, per the Pew Research Center. If wage growth fails to outpace inflation, it makes saving and investing a difficult proposition for the average American household.

That leads to the next point: anemic savings rates. When Bankrate released its June 2014 Financial Security Index last year, the results unfortunately flew under the radar of most Americans. But trust me -- they're an eye-opener. When asked how much Americans had in emergency savings accounts (i.e., readily available money in checking, savings, or a money market account), 50% had either no emergency fund, or enough to pay less than three months of expenses. Just 23% had the recommended emergency fund of six months or longer. A strong economy is needed to ensure that the paycheck-to-paycheck Americans have enough job security that they can continue to meet their financial obligations.

Another major problem is underemployment. A few decades prior, going to college was something of an exception. Those who did and graduated with a degree were likely to land a job commensurate with their added effort and schooling. Fast-forward to today, and that's far from the case.

Despite college being something of a prerequisite for advancement in the business world, there are no guarantees a good job will be waiting for graduates once they receive their degrees. Estimates from the Center for College Affordability and Productivity in 2013 would appear to confirm this thesis, with the CCAP predicting that the number of college graduates entering the workforce each year would be more than double the number of available jobs requiring at least a Bachelor's degree between 2010 and 2020. 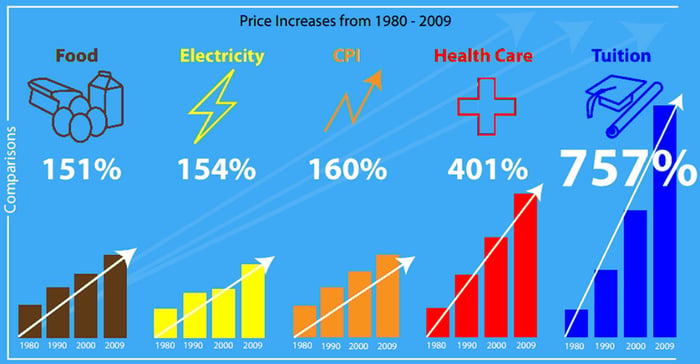 Source: Center for College Affordability and Productivity via Facebook.

What's more, the cost of a college education seems to be rising exponentially compared to everything else. Taking into account the more than $1 trillion in student loan debt currently outstanding, this is an issue that demands attention.

And of course, there are retirement concerns. The Great Recession did quite the number on skittish baby boomers who bailed on the stock market. Add in a number of issues facing the Social Security program over the coming two decades, and you have a recipe for a potentially unprepared generation of retirees who may not have enough in Social Security income and savings to comfortably retire.

Are there more issues than just these? I'd suggest so, but these are some of the most important economy-related issues.

Why you should care
Election season is a time when some American will simply "tune out," but there's a lot riding on the 2016 presidential election that you should care about.

We're going to witness a presidential transition for the first time since the Great Recession. Chances are likely that some of the economic policies of President Obama are going to be altered to some degree by whoever occupies the oval office next, regardless of party affiliation. These new or altered policies could have bearing on the health of the overall economy, which in turn can affect the stock market and the underlying value of your investments.

It's probably a little too early to start trying to read between the lines to decipher what economic growth strategies the declared candidates plan to use to spur the U.S. economy. The field of candidates is still being set. However, when we have narrowed the field down in the coming months, it'll be critical for the American people to know not only where their candidate stands on economic policies and reforms, but where the other candidates stand as well, since the American public needs to be able to adjust to any presidential candidate and economic environment.

Change doesn't have to be a bad thing, but it will behoove the American public and all investors to watch this election carefully and understand what new policies may be on the horizon that could affect their pocketbooks and investment and retirement accounts.