Please ensure Javascript is enabled for purposes of website accessibility
Log In Help Join The Motley Fool
Free Article Join Over 1 Million Premium Members And Get More In-Depth Stock Guidance and Research
By John Rosevear – May 27, 2015 at 3:00PM

These two powerhouses are very different, but they both sport great brands, solid management, and impressive growth prospects.

How could you possibly go wrong investing in booze? Talk about a product with a following!

A lot of investors don't want to touch so-called "sin stocks," like those of companies that make alcoholic beverages. To be clear, that's OK: If you've got strong feelings about the beer, wine, and spirits businesses, there are equally great investments to be found elsewhere.

But if the business of beneficially fermented or distilled beverages doesn't push your bad-ethics button -- or if, like this humble Fool, you might enjoy a well-made cocktail now and then -- and you like companies with big moats, strong brands, great cash flows, and dividends, then I encourage you to read on.

Beer brands don't get much stronger than Budweiser
The beer industry is led by a small group of massive players, with a couple of mid-tier companies -- and then a long list of local craft brewers. But the most massive of the massive is giant Anheuser-Busch InBev (BUD 1.26%). If you like beer and profits, this one has it all: Superpower-level brands (Budweiser, anyone?) and scale, a terrific efficient distribution system, great management, and fat cash flow add up to a very strong company.

There's more to this story than Bud, though. The company owns about 200 beer brands, including 16 that each generate a billion dollars or more in revenue every year. Those include big global names like Bud and Stella Artois, as well as a long list of strong regional brands.

Consider this: Anheuser-Busch InBev has about 20% of the global market for beer. One beer in five, all over the world. That adds up to a lot of revenue -- and it has added up to a lot of growth over the last five years. 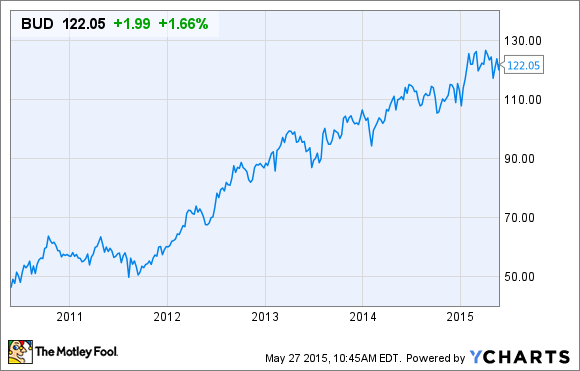 The company returns some of those profits to shareholders, generating a 3.5% dividend yield. But it's also looking to build for the long term with careful acquisitions, suggesting this growth story is far from done.

Jack Daniel's is just the beginning at this family-run powerhouse
Want a strong brand? When it comes to American whiskey, brands don't get much stronger than Jack Daniel's -- and Jack has helped make its owner, Brown-Forman (BF.A 1.32%) (BF.B 0.89%), a global spirits powerhouse.

Brown-Forman likes to point out that it's a "family controlled" business that has been around for over 140 years. The core of the business is still the giant Jack Daniel Distillery in Tennessee, but Brown-Forman also owns a slew of other good brands, including Herradura tequila, the Finlandia vodka line, Southern Comfort, and Korbel, the giant California sparkling-wine operation.

Jack Daniel's isn't the only whiskey driving growth at Brown-Forman. Sales of its premium Woodford Reserve line were up 26% last year. Source: Brown-Forman.

Lately, the company has been riding the worldwide rise in interest in American whiskey -- not just with the Jack Daniel's portfolio (up 8% in 2014), but also with the well-regarded premium Woodford Reserve brand. Net sales of the Woodford Reserve line grew 26% in 2014, its 18th consecutive year of double-digit growth. 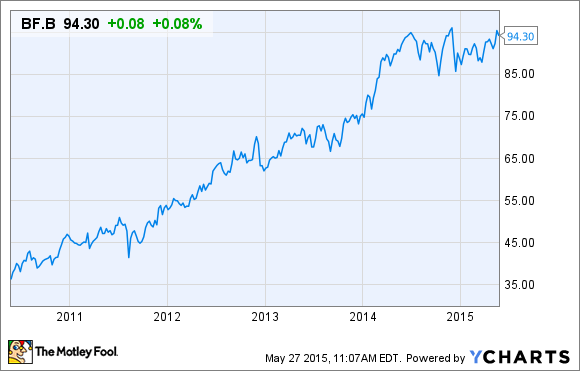 Note that Brown-Forman has two classes of shares. They differ only in voting rights: Class A has them, Class B doesn't. (That's how the family has managed to stay in control of the company for over 140 years -- they control the Class A shares.) But given that both pay the same dividend, and given that Class B shares tend to be a bit cheaper than the scarcer Class A, the B shares might be the better bet for individual investors. They're yielding about 1.6% right now.