What do we mean when we talk about a company's "return on equity"?

Return on equity (sometimes abbreviated as "ROE") is simply a company's net income for a period (usually the last 12 months) divided by its shareholders' equity, its total assets minus its total liabilities.

You can get these numbers from a company's standard financial statements -- net income is on the income statement, while shareholders' equity is on the balance sheet.

Return on equity is one of several ratios investors use to home in on promising companies. It's useful for comparing the profitability of a given company to others in the same industry.

So which company is the return-on-equity champ in the auto industry? The answer might surprise you.

The automaker with the best return on equity
Generally speaking, when we think of big profitability in the auto business, we think of the most profitable kinds of products: luxury cars, pickup trucks, and big SUVs. But when it comes to return on equity among automakers, the champ is a company that doesn't make any of those things.

It's not a luxury car, it's not a big SUV, and it's definitely not a pickup truck. But the Subaru Outback is a profitability powerhouse for Fuji Heavy Industries. Source: Subaru.

It's hard to match the whopping 25.6% return on equity posted over the last 12 months by Japan's Fuji Heavy Industries (OTC:FUJHY). Fuji Heavy isn't a household name in the U.S., but its Subaru brand certainly is. And Subaru's U.S. sales have grown in a big way, up 88% over the last three years.

Still, by global-automaker standards, Fuji Heavy is a small company. It sold just 911,000 vehicles in the fiscal year that ended on March 31. (Like many Japanese companies, Fuji Heavy's fiscal year starts on April 1, not Jan. 1.) That's not even a tenth of the 10.23 million vehicles Toyota sold last year.

Fuji Heavy earned more than a tenth of Toyota's very strong net profit, though, bringing in 261.9 billion yen ($2.14 billion) in net income on those sales. With low shareholders' equity of 1.022 trillion yen ($8.34 billion), that income was enough for a powerhouse return.

How does it compare? The closest runners-up among major carmakers are Germany's luxury-car giants, Mercedes-Benz parent Daimler and BMW Group, which posted returns on equity of 17.9% (Daimler) and 14.8% (BMW) over the last 12 months.

On a per-sale basis, luxury cars are considerably more profitable than mass-market offerings generally, although Fuji Heavy has done a great job with its carefully limited mass-market product line. Its operating profit margin of 14.7%  is among the best in the business, thanks to Fuji Heavy CEO Yasuyuki Yoshinaga's conservative approach to cost management, along with the strong appeal of Subaru's current product offering, particularly in the U.S.

But is this the best way to pick automakers as investments?

Why you need to know more than return on equity
You certainly wouldn't have gone too far wrong buying Fuji Heavy's stock a few years ago. As you can see from the chart below, the company's share price has roughly quintupled over the last three years. 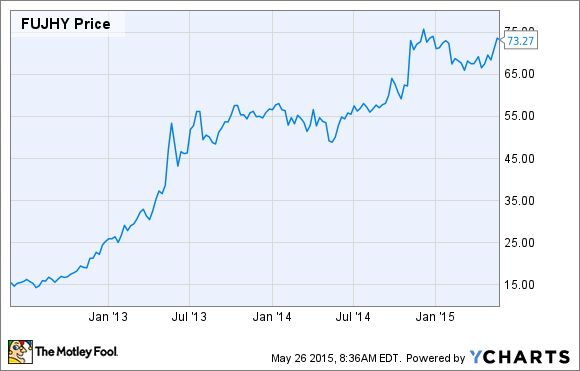 But does that mean that Fuji Heavy is a great stock to buy now? Certainly it's a well-run company with a tremendous brand. But note how the stock has more or less plateaued over the last year.

There's a reason for that: Subaru is heavily dependent on the U.S. market, where it gains 58% of its total global sales. And while the last few years have been a spectacularly excellent time to have a well-regarded lineup of fuel-efficient crossover SUVs (and SUV-like cars) in this nation, the U.S. new-vehicle market is probably at or near its peak. Subaru is likely to continue to do quite well, but there might not be a whole lot of growth left in the near term.

That might make other automakers with lower returns on equity more appealing as investments over the next few years. General Motors, for instance, has a ROE of just 11.66% over the last 12 months, with a global profit margin that is terrible by comparison with Fuji Heavy's. But while the General is solidly profitable six years after exiting bankruptcy, it is still to some extent undergoing a turnaround -- one that could boost its margins, profits, and share price significantly over the next five years. That growth potential makes GM an intriguing investment in a way that Fuji Heavy isn't.

Return on equity can help you find the best-managed companies
GM and Fuji Heavy are very different companies in very different situations. One is a global colossus recovering from decades of mismanagement, while the other is a small, well-run player in a market niche that has boomed over the last few years.

But the investment cases for both companies don't necessarily go the way you'd expect from such descriptions. That points to the limitations of return on equity as an investment indicator.

In an industry in which all of the key players were basically healthy and stable, return on equity could help us locate the best-managed companies and the most efficient generators of return. In fact, it did so here: stable, careful management has been a huge part of Fuji Heavy's success.

But it's not enough by itself to make a case for a stock. As always in investing, you must know more than the numbers; you need to know the stories behind the numbers, too.