Warren Buffett spent another $300 million on Wells Fargo shares in the first quarter.

Why is Buffett smiling? Because he's really good at his day job.

"Too much of a good thing can be wonderful."
--Mae West

Warren Buffett must feel that way about megabank Wells Fargo & Co. (NYSE: WFC). At the end of 2014, Berkshire Hathaway (NYSE: BRK-A) (NYSE: BRK-B) held more than 463 million shares of the company, worth $25.4 billion. Berkshire's stake in Wells Fargo was the largest holding in its portfolio by a country mile: It constituted about 24% of Berkshire's portfolio and was worth $8.5 billion more than the second-largest holding, Coca-Cola.

And it seems Berkshire loves Wells as much as ever: In the most recently ended quarter, Buffett -- or Berkshire portfolio managers Ted Weschler and Todd Combs -- bought another 6.8 million shares, worth more than $382 million at recent market prices.

Why is Buffett willing to commit so much of Berkshire's wealth to this company? Let's take a closer look.

Sticking with what you're good at
Buffett has more than proven his investing and business prowess in the insurance and banking industries. These are businesses in which having a margin of safety is incredibly important.

In banking, as we learned through the economic crisis and the liquidity crunch that followed, banks that effectively manage their risk -- like Wells Fargo -- can be fantastic long-term investments. For Buffett to risk such a large stake on this one bank says a lot about his comfort with Wells Fargo's management team and their ability both to manage the bank's risk and to make profitable lending decisions.

Here's a look at Wells Fargo's bottom-line results, as many of its megabank peers were struggling in the 2007-2009 banking crisis: 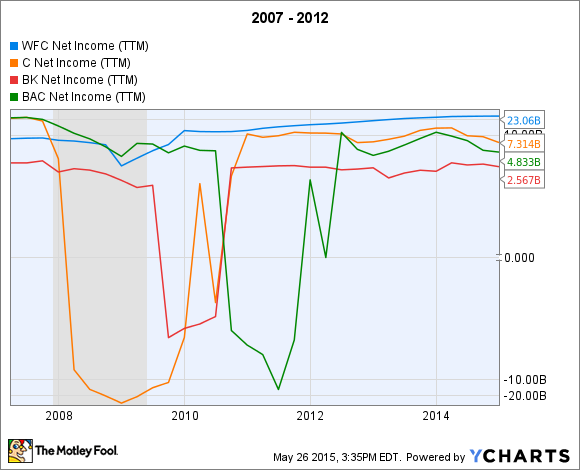 Wells Fargo continued to deliver solid profits while other banks suffered massive losses. True, Wells did receive $25 billion in funds from the U.S. federal government in 2008, but by December 2009 the company had paid back that $25 billion -- plus an additional $1.4 billion in dividends -- making it one of the first banks to demonstrate its stability in the wake of the financial crisis.

But what it really boils down to is this: How good is the bank at turning profits on its assets? Wells Fargo is almost peerless in the world of U.S.-based big banks: 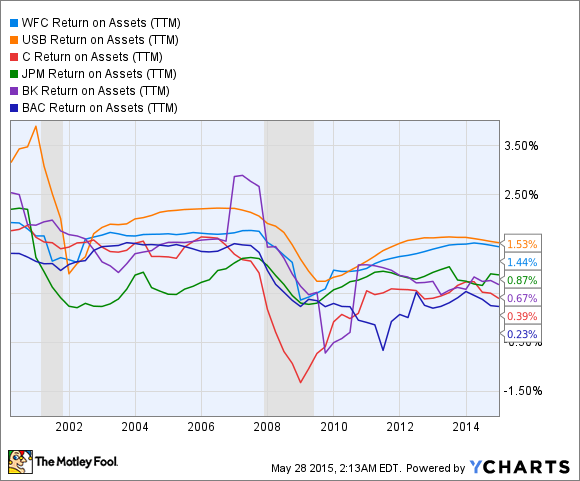 Meanwhile, its ability to grow earnings per share has been unparalleled: 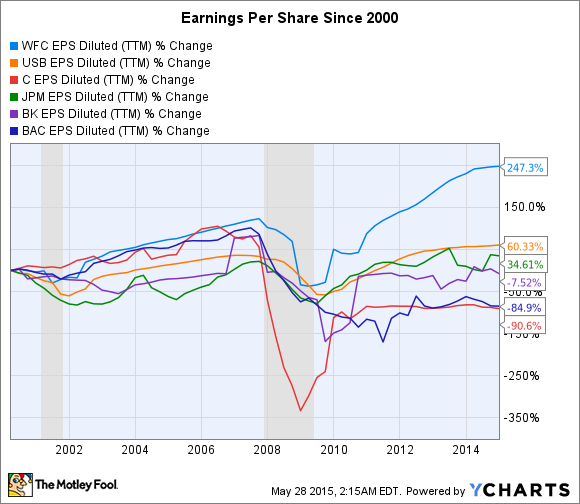 Berkshire is not risking too much capital
Average investors should not generally hold a quarter of their portfolio in a single stock, but a few things bear pointing out: 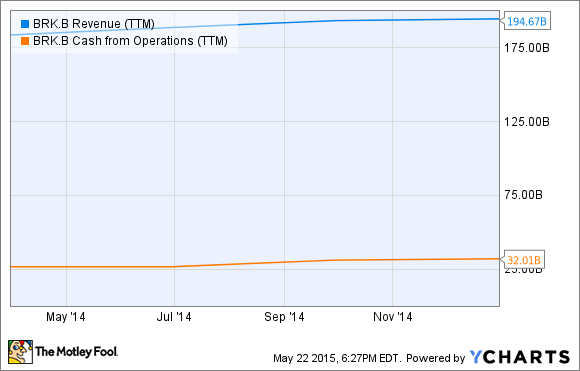 In this context, Wells Fargo only makes up about 7% of Berkshire's market value.

Is Wells Fargo right for your portfolio?
Wells Fargo is one of the best-run banks on the market. It pays a dividend yielding a respectable 2.7% at recent prices, and along with JPMorgan Chase, it's one of the few big banks that pay a higher dividend today than they did before the recession. Furthermore, that dividend is likely to grow over time as the company grows its earnings. The bank has increased its dividend every year since 2011 and will raise it 7% in 2015. As CEO John Stumpf said on the recent earnings call, "returning capital to shareholders remains a priority" for management.

Since the beginning of the financial crisis and recession, Wells has issued a lot of shares, adding more than 50% to the outstanding share count. This was a product of necessity: A significant portion of the capital raised was used to meet higher liquidity standards for banks. But it was also used opportunistically to grow -- take for example the stock-funded, $14.8 billion acquisition of Wachovia in 2008. Since mid-2013, however, Wells management has repurchased more than 140 million shares, reducing the outstanding count by almost 3%.

Add it all up, and Wells Fargo is one of the best-run banks of any size, with as strong a long-term track record of earnings growth (and loss avoidance) as you'll find. I'll let Warren Buffett sum it up in this quote (emphasis mine):

When assets are 20 times equity -- a common ratio in this industry -- mistakes that involve only a small portion of assets can destroy a major portion of equity. And mistakes have been the rule rather than the exception at many major banks. Most have resulted from a managerial failing that we described last year when discussing the "institutional imperative": the tendency of executives to mindlessly imitate the behavior of their peers, no matter how foolish it may be to do so. In their lending, many bankers played follow-the-leader with lemming-like zeal; now they are experiencing a lemming-like fate.

Because leverage of 20:1 magnifies the effects of managerial strengths and weaknesses, we have no interest in purchasing shares of a poorly managed bank at a "cheap" price. Instead, our only interest is in buying into well-managed banks at fair prices. With Wells Fargo, we think we have obtained the best managers in the business.

Those words sound especially relevant following the financial crisis, right? Well, Buffett wrote them in 1990. A quarter-century later, plenty of bankers still make bad decisions, while Wells continues to avoid the pitfalls. Does that mean it's a good fit for your your portfolio? I'd say it's worth a close look.