Microsoft (NASDAQ:MSFT) is a minor player in the smartphone market, but it has some big plans for "stealing" Android away from Google (NASDAQ:GOOG) (NASDAQ:GOOGL).

Microsoft recently signed "strategic agreements" with 20 Android OEMs -- including Sony and LG -- to install Word, Excel, PowerPoint, OneNote, OneDrive, and Skype on Android tablets. Back in March, it signed similar agreements with nearly a dozen Android OEMs, including Samsung and Dell, to install those apps on Android smartphones and tablets.

Microsoft hopes that offering its ecosystem apps as alternatives to Google apps could tether more Android users to its own cloud-based ecosystem.

Why Google's "allies" are aiding Microsoft
To understand why Android OEMs are helping Microsoft, we should first discuss Google's mobile strategy. Google offers mobile device makers a free open-source OS, Android, so they don't need to develop their own software. In exchange, Google tethers those mobile users to its ecosystem with apps like Google Search, Drive, Gmail, and YouTube. It then monetizes Android users with mobile search ad revenue and a 30% cut of purchases on Google Play.

At first, that arrangement was a win-win situation for both Google and handset makers. But more Android handset makers entered the market, aided by cheap "turnkey" hardware designs, and commoditized the market. Leading handset makers struggled to keep customers from turning to low-margin competitors like Xiaomi and Huawei. Meanwhile, Google pre-installed more ecosystem apps with every Android version, which led to a "bloatware" problem.

At the same time, handset makers started exploring new ways to monetize their Android devices without Google. A group of companies and developers, the Android Open Source Project (AOSP), is even trying to prevent Google from fully controlling Android by "forking" devices and making it optional to install Google apps.

A golden opportunity for Microsoft
That's where Microsoft comes in. Handset makers are getting tired of shouldering all the overhead risks as Google profits, so Microsoft is offering them a refreshing alternative. By doing so, Microsoft could boost its cloud revenue, which relies heavily on the growth of "software as a service" apps like Office 365 and OneDrive. 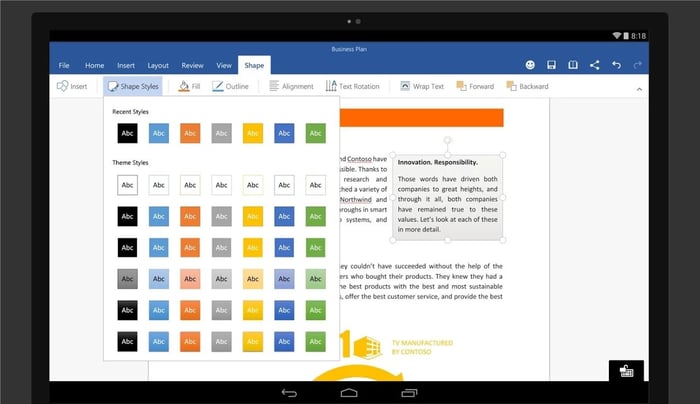 Windows Phones accounted for less than 3% of the global smartphone market in the first quarter, according to IDC. That's why Microsoft started offering its cloud-based apps on Android and Apple's iOS. Even if Microsoft can't control the hardware market, it can still tether some of those devices to its software ecosystem.

Microsoft also has a big bargaining chip in regards to Android. Google doesn't charge any licensing fees for Android, but OEMs still pay Microsoft patent fees on Android (about $5 per device) which total roughly $2 billion per year. If Microsoft waives that patent fee for OEMs that preinstall Microsoft software, it could attract a lot of allies. I'm not saying that's Microsoft's plan, but we should remember that Samsung only agreed to preinstall Microsoft software on Galaxy devices after the two companies quietly settled a lawsuit regarding Samsung's delinquent patent payments.

Hitching a ride on Android is only one part of Microsoft's plan to disrupt Android's growth. The company is working with Xiaomi to develop a custom ROM which can install Windows 10 on Android phones. It also plans to emulate Android apps on Windows 10.

Watch your back, Google ...
Microsoft's plan is a thorn in Google's side, but it isn't the search giant's only problem with Android. In the fourth quarter of 2014, forked Android devices accounted for 29% of all Android shipments. Less than 10% of all Android devices have been upgraded to 5.0 Lollipop or above, making it harder to launch new features for all users. Popular Android OEMs like Samsung and Xiaomi have also launched their own ecosystem apps which replace key Google apps. Simply put, Android is the world's largest OS, but Google is slowing losing control of it.

Microsoft's upcoming launch of Windows 10, which will blur the lines between PCs and mobile devices, is also a threat to Android. Once mobile devices and PCs run the same version of Windows with synchronized cross-platform apps, Windows 10 Phones could start gaining ground quickly against Android.

Microsoft CEO Satya Nadella has proven that he isn't afraid of turning the company's old business model upside down. By imitating Google's own strategy of launching software across multiple platforms to grow its ecosystem, it could slowly but surely steal Android away from the search giant.