Please ensure Javascript is enabled for purposes of website accessibility
Log In Help Join The Motley Fool
Free Article
Join Nearly 1 Million Premium Members And Get More In-Depth Stock Guidance and Research
By Keith Speights – May 31, 2015 at 11:07AM

There's been plenty of exuberance for healthcare stocks lately -- but is it rational or irrational?

That's how Citigroup economists Steven Wieting and Shawn Snyder described the U.S. healthcare system. Here's the catch, though: Wieting and Snyder wrote those words in 2012. Since then, the price of the Health Care Select SPDR exchange traded fund (XLV -0.29%), a good barometer for healthcare stocks in general, has doubled.

It's easy to forget that when former Federal Reserve Board chairman Alan Greenspan spoke of "irrational exuberance" in the stock market, stocks kept on rising for another three years -- then crashed. Now three years have gone by since the Citigroup warning. Are we in a healthcare stock bubble that's about to pop?

Bubble trouble?
With broader market indexes hitting all-time highs with no significant correction since 2011, some investors are getting worried. But the run-up in healthcare stocks makes the S&P 500 index's gains look paltry by comparison. 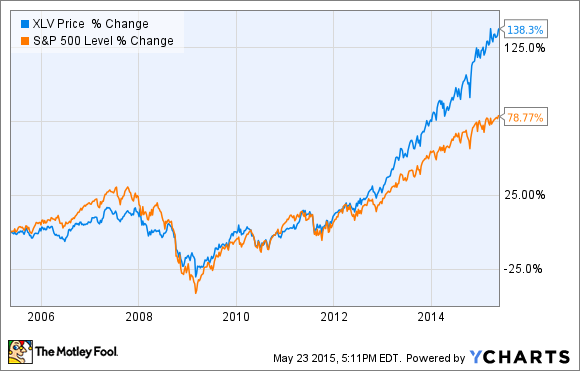 Is it time for gravity to kick in for healthcare? You could make that case looking at the valuations of some of the biggest healthcare companies that are among the top 10 holdings in the Health Care Select SPDR ETF.

Bristol-Myers Squibb (BMY 2.31%), for example, claims a price-to-earnings multiple of 50. AbbVie's (ABBV 0.25%) earnings multiple currently stands at a whopping 58. Both drugmakers are at or near all-time high valuations.

However, neither Bristol nor AbbVie saw impressive earnings growth over the last year. That's true of most of the other top holdings in the Health Care Select SPDR ETF. Soaring share prices and all-time high valuations combined with somewhat stagnant earnings growth? It's not too difficult to argue that sounds like a recipe for a bubble.

Room to run?
On the other hand, three of the four largest stocks in the Health Care Select SPDR ETF have experienced solid earnings growth. Net income nearly doubled over the last 12 months for two of those companies -- Merck (MRK -0.50%) and Gilead Sciences (GILD 3.82%). Merck's performance comes with an asterisk, though: the company generated $11.2 billion by selling its Consumer Care business.

Still, both companies prove the point that not all healthcare stocks are valued at lofty levels. Merck's earnings multiple of 15 isn't very scary. And Gilead's P/E of less than 13 could be characterized as bargain territory by some.

Also, the market places much heavier emphasis on the future than it does the past, particularly in the healthcare sector. Most of the healthcare ETF's top holdings have much more palatable valuations based on expected future earnings. Even seemingly sky-high priced AbbVie claims a forward earnings multiple of only 13.

These bright prospects stem from solid products for many of these companies. AbbVie's Humira continues to rake in billions, and its pipeline promises to make up from falling Humira sales once the blockbuster loses patent protection. Meanwhile, Gilead's hepatitis C drugs Harvoni and Sovaldi have absolutely dominated the market, raking in so much cash that the company initiated a dividend just to have something to do with it all. And while Bristol and Merck are still feeling the effects of losing patent exclusivity for blockbuster drugs, both companies can look forward to encouraging pipelines.

After all, there are some solid reasons why healthcare is booming. New drugs that achieve results unheard of in the past are now on the market (i.e., Gilead's aforementioned Sovaldi and Harvoni, which essentially cure hepatitis C). The baby boomer generation is aging, driving healthcare demand. Healthcare reform has opened access to healthcare services for more Americans.

Will healthcare stocks double again over the next three years? Probably not. Exuberance does tend to fade over time. However, I don't think a crash is imminent either. This likelihood of neither a double nor a bubble should make picking specific stocks more important over the next few years. But I'd say that picking stocks in the healthcare industry gives investors a better shot at solid returns than most other areas.