If you have an interest in Halliburton or Royal Dutch Shell, you probably should be doing your homework.

If you want a little more excitement in your investing life right now, follow the oil market. The industry these days is dealing with the plunge in oil prices, sanctions that could curb development of Russia's massive oil reserves, and OPEC holding a hard line on production in order to weed out the meek from the strong in a good old-fashioned stare down for market share.

While there are hundreds of things to watch in the business, not all of them will over time mean much for each respective company. So let's look at two companies making transformative moves right now,  as well as one trend that is defining the American oil space today and could have major implications for which companies will be the prominent players in the future.

Halliburton (HAL): By now you might know that oil-field services giant Halliburton is going through the regulatory hurdles of acquiring rival Baker Hughes (BHI) for a cool $35 billion. To make it happen, management will sell off as much as $10 billion in assets in overlapping businesses to appease government officials about possible antitrust issues. Halliburton believes the deal will result in some big-time cost savings for the two companies and will help it compete with its largest rival, Schlumberger (SLB 0.41%).

This is a thing to watch because Baker Hughes has underperformed both Halliburton and Schlumberger by almost every return metric over the past five years. 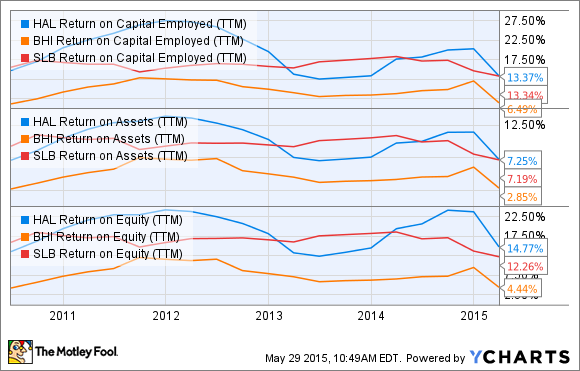 It's fair to say the combined company will be able to command better pricing from its clients, and eliminating extra capacity in the overlapping service business will bring down costs and improve margins. However, with Halliburton having to sell large chunks of its business to buy an underperforming peer, investors might want to look at the financial statements of the post-acquisition company before making any investment decisions.

Royal Dutch Shell (RDS.B): Shell finds itself in a situation similar to Halliburton's as it looks to incorporate its $70 billion acquisition of BG Group into the fold. Shell made this buy primarily to further cement the company's leading position among the integrated oil and gas companies in the LNG trade. When combined, the two companies expect to deliver approximately 45 million tons of LNG per year by 2018, more than double the amount of the second-largest integrated competitor. It's a pretty compelling proposition, but buying BG Group for the good parts means Shell is also responsible for the company's not so great parts. BG Group's capital expenditures have outpaced its operational cash flow every year since 2008, and its return on average capital employed has been well below Shell's for several years now.

The argument could be made that BG has needed to spend heavily to get its LNG operations up and running, and that the two companies' overlap in LNG and offshore Brazil operations could provide some cost post-merger savings. As with Halliburton, though, we won't know for certain until we see some quarterly results that reflect what the company will look like after the acquisition and subsequent asset sales.

Highly indebted independent producers: In contrast with the prior sections' focus on individual stocks, this is a call to pay attention to what will happen over the next several months with U.S. independent oil and gas producers that were making huge bets on higher oil prices by wildly outspending the cash they were generating in order to grow production. The question is how profitable many of these companies can be in a lower-price environment, or if their assets are attractive to a bigger fish now that these companies' stock prices have fallen rather drastically.

One thing that has kept a major acquisition spree from happening thus far is that there is still quite a bit of access to cheap debt. There is no better example of this than SandRidge Energy (NYSE: SD). The company has a credit rating from Standard & Poor's that is well below investment grade and just needed to raise $1.25 billion through second lien collateralized notes, which is similar to taking a second mortgage on a house. Despite this less than stellar credit record and the type of loan it was taking out, the company obtained the money at a borrowing rate of 8.75%; that's not great, but still quite cheap considering its financial situation.

As long as companies can still get cheaper capital through the debt markets, it's hard to see many of them giving into a buyout at less than very favorable rates.

What a Fool believes
The oil industry is an exciting market to watch right now because there is so much going on that could define several companies for years to come. Big mergers and acquisitions like those by Halliburton and Shell -- and the lack of merger activity in the American production space -- are just a couple examples of the busy times for oil stocks. Based on where oil prices are and all the other things the industry is facing, I'm sure there will be plenty of other things to look out for in the future.