While oil prices have enjoyed a remarkable recovery off of the bottom, up nearly 40% over the past two months, the same can't be said for the U.S. rig count. It has now fallen every week for 25 straight weeks, according to data from Baker Hughes (NYSE:BHI), which continues its record setting drop. It's a record that has really been the driving force behind the recent oil price recovery as fewer rigs means less future oil production, which is just what the oversupplied oil market needs to self-correct.

In recent years oil production in the U.S. enjoyed quite a renaissance. Decades of declining oil production have reversed and recently the U.S. is producing more oil than it had in decades. Driving this rebound is the more recent combination of using horizontal drilling and hydraulic fracturing to unlock oil in tight shale plays. That's abundantly clear from the following chart, which shows that oil production in the U.S. enjoyed a remarkable rise over the past five years thanks to an equally remarkable rise in the horizontal rig count.

However, more recently what's quite noticeable is just how rapidly the horizontal rig count has fallen since peaking. In fact, the overall oil rig count, which includes horizontal rigs as well as vertical rigs and offshore rigs, is down roughly 60% from the peak of 1,528 rigs. As a result of the record consecutive weekly drop the rig count is down to levels not seen since January 2003.

The silver lining behind the record setting plunge
The steep drop in the rig count over the past six months is terrible news for those working in the oil industry. Fewer rigs working means fewer jobs for oilfield service contractors like Baker Hughes, which has already shed over 10,000 jobs worldwide. Further, in the U.S. alone the oil industry eliminated about 52,000 jobs, according to outplacement firm Challenger, Gray & Christmas, which is almost 10% of the country's total oilfield workforce. These job losses are a big hit to the U.S. economy because the average oil and gas worker pulls in $108,000 per year according to the U.S. Energy Information Administration. So, not only is the economy losing high paying jobs, but those jobs had helped to create a growing number of indirect and induced jobs, which are now at risk of being lost as well.

That downside to the drop in the rig count aside, there is a silver lining. As the rig count falls so does future production, which is the key to erase the oversupply of oil on the market. An example of this is seen in Texas' Eagle Ford Shale where its rig count has fallen from more than 250 last year to below 150 in recent weeks. As a result of this dropping rig count, production in the play is beginning to decline because the industry isn't bringing enough new wells online to keep production steady. We can see this in the following chart. 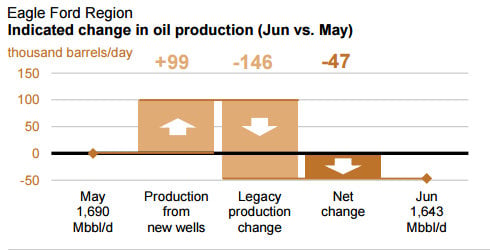 What this slide shows is that those 150 rigs are only adding 99,000 barrels per day of new oil production, however, while that's happening the daily production from legacy wells is falling by 146,000. This is resulting in a net daily production decline of 47,000 barrels.

The reason this decline is important for the industry is because it is expected to be a key to fixing the current supply and demand imbalance. It's an imbalance that OPEC usually steps in to fix, but the oil cartel has decided to push its production higher in order to keep its share of the oil market. Instead, the U.S. oil industry has been forced to step in to rebalance supply with demand, until demand growth rebounds. As this happens it is expected to extend the rebound in oil prices to the point where the industry can be in a position to resume growth on a more profitable and sustainable level.

Investor takeaway
The rig count in the U.S. set a new record by falling 25 straight weeks. That's not a pretty record as it means the industry is also shedding a lot of jobs. However, that drop has come out of necessity after OPEC refused to cut its production to rebalance the oil market. Now that the market is showing signs of returning to balance it suggests that oil prices could continue to move higher, which will improve the profitability of oil companies and eventually lead to a recovery in oil stocks and oil industry jobs.