Stocks are a bit lower on Tuesday morning, with the Dow Jones Industrial Average (DJINDICES:^DJI) and the broader S&P 500 (SNPINDEX:^GSPC) down 0.05% and 0.11%, respectively, at 11:15 a.m. EDT. As we head toward Friday's release of the Labor Department's May employment report -- a crucial piece of data for a market that is trying to handicap the timing of the Federal Reserve's anticipated interest rate rise -- I thought I'd look at an area of the market that is vulnerable to the central bank's action: high-dividend stocks.

A Wall Street Journal headline on Sunday announced that "U.S. Dividend Stocks Lose Luster," with the subhead declaring, "As Fed rate rise looms, investors begin to shy away from high-yield shares that have been big winners." In the wake of the financial crisis, the Federal Reserve's extraordinary policies have been a boon to this category of stocks. Six-and-a-half years of a policy interest rate set at zero and repeated rounds of quantitative easing that compressed bond yields have pushed investors to reach for yield beyond fixed-interest securities.

The flood of money into dividend shares
Among the favored destinations for yield-starved cash were, quite naturally, shares that appeared to present bond-like characteristics of stable prices and high dividend yields. The most prominent beneficiaries were master limited partnerships, or MLPs; utilities; and real estate investment trusts, or REITs.

The Journal cited Morningstar data, according to which $48.4 billion of cash flooded into mutual and exchange-traded funds tracking utilities and REITs from 2010 through 2014. During the same period, investors withdrew $416 billion from U.S. equity mutual funds. (I was unable to find the corresponding data for ETFs; although I suspect flows were positive, I'm not sure they compensate for the total redemptions of mutual funds.)

The trouble is that when investors base their decision making on a single factor to the exclusion of all others -- in this case, yield -- the conditions are set for irrational valuations. Which is exactly what appears to have occurred.

The reach for yield that led to overvaluation
Take utilities stocks, for example: As of May 28, the S&P 500 Utilities index was valued at 15.6 times estimated earnings per share for 2016, in line with the equivalent multiple for the broad S&P 500 index of 15.9. However, the Utilities index's 2016 EPS estimate suggests 4.4% annualized growth relative to 2014 -- little more than half the 8.5% earnings growth the S&P 500 is forecast to produce. As such, utilities look overpriced relative to the S&P 500; that's problematic, particularly in light of an emerging consensus that the broader index itself isn't cheap.

As such, all three sectors mentioned above are vulnerable to a correction; indeed, on a price basis, all in the red year to date, having underperformed the S&P 500 by a minimum of 4.5 percentage points: 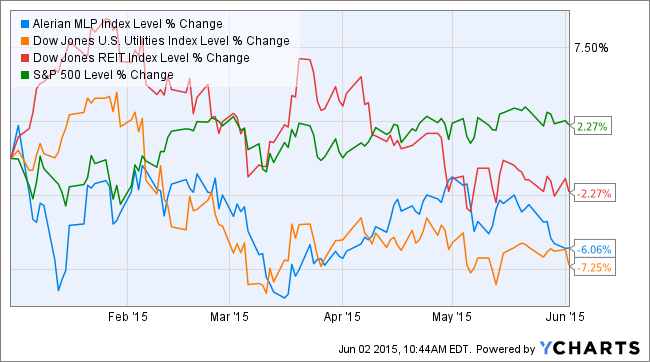 As the chart demonstrates, utilities have performed the worst, trailing the market by nearly 10 percentage points. Meanwhile, the discussion of utilities' valuation above suggests that underperformance could well continue this year. The unwinding of some of the excesses of the "free money" era is barely in its infancy.