As long as better fuel economy retains its high value for consumers it will remain a focus for automakers. Because of the mpg advantage diesel vehicles enjoy over their gasoline counterparts, along with a reduction in noise, vibration, and harshness (also known as NVH), sales of diesel vehicles have enjoyed a rebound since all but disappearing in the U.S. in the late 1980s and 1990s. Last year sales of diesel vehicles increased more than 13% over 2013 sales, more than twice the 6% increase of U.S. new-vehicle sales in general.

However, much like the United States' automotive industry, the diesel vs gasoline comparison has evolved over the last decade. Many variables have changed significantly, and some pros and cons of the two fuels have begun to converge, meaning diesels may not provide as much of an advantage as in years past.

Let's dig in and better understand the comparison in terms of vehicle prices, residual values, break-even points, and where diesel and gasoline trends will take us down the road.

Diesel vs gasoline prices
The first thing consumers need to consider is that diesel vehicles will cost consumers more upfront. The higher initial cost of a diesel vehicle is because they don't sell in volumes as high as those of their gasoline counterparts in the United States, in part because the U.S. has more strict emissions standards than, say, Europe, where diesel vehicles are more popular. Here are a few examples of the difference in diesel MSRP and their gasoline counterparts. 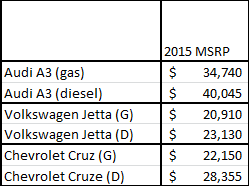 Another thing consumers must consider is the cost difference between the diesel and gasoline fuel itself, which has changed substantially over the years.

A little more than 10 years ago the price of diesel fuel was typically less than regular gasoline, which made savings at the pump more significant and enabled consumers to more quickly offset the higher upfront costs of a diesel vehicle. Since then, however, the cost of diesel fuel has risen, for a handful of reasons: worldwide diesel demand has been rising consistently, the United States transitioned to ultra-low sulfur diesel (ULSD) which increased costs, the federal excise tax on diesel fuel is $0.06 higher per gallon than on regular gasoline, and marketing and distributions costs are higher.

With diesel fuel costs currently grabbing more bills out of your wallet at the pump, as well as diesel vehicles commanding a higher price tag upfront, how significant is the mpg advantage diesel offers -- and is it worth it? To better answer that question, let's look at the mpg advantage itself, as well as how different driving tendencies affect the outcome for different consumers and situations.

How much will a diesel save you?
Averaging those three examples, the diesel vehicles hold a 24% advantage over their gasoline counterparts in the city, and a 29% advantage on the highway.

Those results are solid, albeit from a small sample size, but for a more accurate representation of whether a diesel or gasoline vehicle is better for your money and situation, you'll need to estimate how many miles are driven in the city and on the highway. Set up a spreadsheet with a formula like this: miles / (city mpg * % of city driving miles + highway mpg *% of highway driving miles) * $per gallon = cost of fuel per year. That formula will give you a sound estimate for fuel cost per year; let's use 15,000 miles annually with 55% of miles driven in the city and 45% on the highway.

You can see that while the annual savings a diesel provides, due to lower cost of fuel per mile, is substantial, it would take many years to offset the premium price tag paid for diesel vehicles. However, those breakeven points appear inflated when you consider the excel model only accounts for the upfront premium -- the pattern holds for the opposite end of the spectrum as well, and diesel vehicles hold resale value better than gasoline counterparts. It's fair to assume your diesel will recoup much of the upfront premium you pay, and more emphasis should be put on how much the diesel vehicle will save on fuel costs annually, rather than the years it would take to break even.

As a rule of thumb, consumers should keep in mind that breakeven points could change significantly in favor of diesels if you do more highway driving than the excel model (that is, 45% of your miles), or drive significantly more miles overall (15,000).

But that's not all! There are a couple additional things to note about these examples as well.

While the Volkswagen Jetta is a fair example overall, as it's one of the best-selling diesel vehicles around the world and in the U.S., the other two serve as good examples of particular factors consumers should consider. Audi's A3, for example, has a much higher annual savings because many luxury vehicles require premium gasoline, which is more expensive than diesel -- something many consumers forget to take into account.

For a glance into the future, Chevrolet's Cruze is a good example of what consumers looking down the road can expect from diesel and gasoline differences in the U.S. market. As you can see, the diesel version of the Cruze held a meager one mpg advantage in the city, largely due to the gasoline's 1.8-liter Ecotec engine. The Cruze even offers a 1.4-liter Ecotec turbo, which wasn't used in the diesel comparison excel model, which can get up to 28 mpg in the city and 42 on the highway. And General Motors isn't the only automaker significantly improving gas mileage: many automakers are using turbocharged engines -- such as Ford's popular EcoBoost -- and reducing overall vehicle weight. As these trends continue, look for the mpg advantage owned by diesel vehicles over their gasoline counterparts to slim down. Don't take it from me -- here's a projection from the U.S. Energy Information Administration. 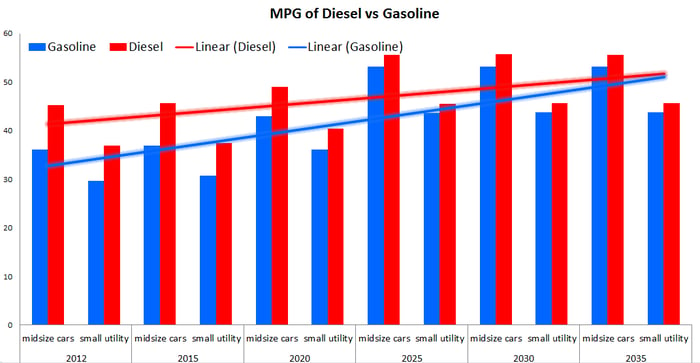 In addition to the mpg advantage narrowing over time, consumers also have to consider that as vehicles continue to become more efficient, the incremental savings on fuel costs diminishes; as the graph below points out, the savings on fuel switching from a vehicle that gets 12 mpg to another that gets 15 mpg is the same as improving from 30 mpg to 60 mpg.

With a better idea of how to calculate diesel savings on fuel costs, and where trends are taking the diesel vs gasoline battle, here are a couple of things worth noting that won't show up on paper when contemplating between diesel or gasoline vehicles.

Diesel pros vs cons
Consumers may think that because of the improved fuel efficiency a diesel provides, it's a better choice for the environment. That's not entirely true: diesel vehicles produce dirty emissions, and our nation's more strict emissions regulations are among the reasons the vehicles aren't as common in the U.S. as they are in Europe. While today's diesel cars are much cleaner than in decades past, some of the emissions include carcinogens, soot, and nitrous oxide -- if you drive significantly more miles in the city and believe in taking care of the environment, a diesel may not be for you.

One pro for diesel engines is that they don't use spark plugs or distributors, which means there is no need for ignition tune-ups. On the flip side, diesels need to be regularly maintained or they can require extensive repairs, and diesel mechanics work at a much more expensive rate.

In an attempt to mash together everything covered in this article, the University of Michigan also provided a model for Total Cost of Ownership between diesel and gasoline vehicles. The equation used is: Depreciation (Original MSRP – Resale Value) + Fuel Costs + repairs + Insurance + Maintenance. The following two graphs show the advantage that the diesel vehicles provided consumers after five years. 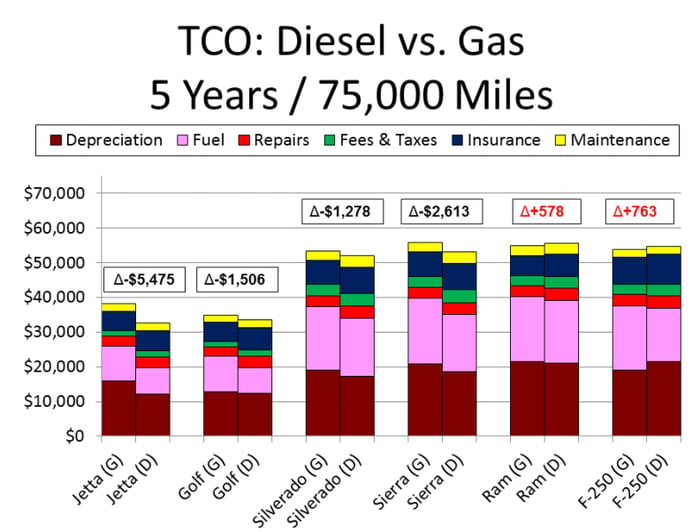 Graphic source. the University of Michigan. 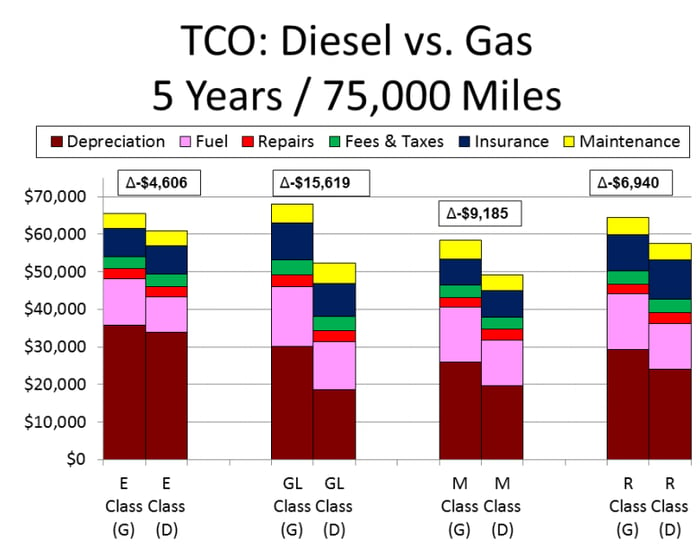 Graphic source. the University of Michigan.

What it all means
Diesel vehicles have been stereotyped as cars that are slow, smelly, and loud, but would at least get you better gas mileage. That's almost entirely changed; diesel vehicles have made significant improvements on all those aspects, which has helped fuel a rebound in diesel vehicle sales in the U.S. recently.

However, gasoline vehicles have also made significant strides, with automakers focusing on reducing vehicle weight and using turbocharged engines, cylinder deactivation, and other technologies to improve fuel economy. As more of these turbocharged gasoline engines hit the roads, the mpg advantage diesels have enjoyed will narrow over time.

Ultimately, if you're driving between 7,500 and 10,000 miles annually it'll be difficult to save enough on fuel costs to justify a diesel purchase. If you drive significantly more miles than average, have a lopsided amount of miles driven on the highway rather than in the city, or are looking into a vehicle that requires premium gasoline, a diesel option is certainly a good one to consider further.

Either way, it's clear the difference between diesel and gasoline vehicles is constantly evolving, and if trends hold true the difference in costs and performance is only going to narrow in the years ahead.