Please ensure Javascript is enabled for purposes of website accessibility
Free Article Join Over 1 Million Premium Members And Get More In-Depth Stock Guidance and Research
By Adam Galas - Jun 4, 2015 at 7:06AM

Even after a 44% distribution cut earlier this year Vanguard's remaining 8.9% might not be as safe as you might think.

Vanguard Natural Resources (NASDAQ: VNR) is a favorite among high-yield income investors for its generous monthly distribution. However, back in February the oil crash forced the MLP to slash its payout 44%, and investors are understandably nervous about the sustainability the new distribution is in a world of lower energy prices. To answer that question we need to look at three factors: Vanguard's latest distribution coverage ratio, recent changes to its hedging portfolio, and its two most recent acquisitions.

Vanguard's first quarter results were actually pretty good. Thanks to a solid hedging portfolio, much higher production, and lower distribution, the MLP's distribution coverage ratio soared to a thoroughly sustainable level, despite a 51%, 47%, and 66% decline in the average price of oil, natural gas, and natural gas liquids, respectively.

New hedging portfolio
To help it protect the new, lower payout, Vanguard is conserving cash by reducing 2015's capital expenditures by 20%, all of which is designed to simply maintain production at current levels.

In addition, in January management reshuffled its hedges, to better smooth out and protect future cash flows from energy volatility. The new hedging portfolio became: 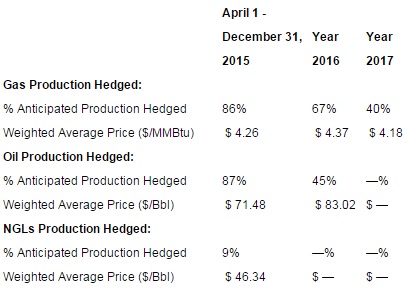 Merger mania: Deals make sense BUT there's a catch
Speaking of Vanguard's latest big acquisitions, let's look at whether they make sense for Vanguard investors and might help it better sustain its new distribution or even grow it in the future.

The first thing to know about these purchases is that they are funded entirely by common units and debt assumption.

All told, these acquisitions will increase Vanguard's unit count by 43 million, or 51%.

On the other hand, the new, larger Vanguard will boast 26%, 31%, and 47% greater reserves, production, and revenue, respectively, and management believes that these purchases will be neutral to distributable cash flow per unit in 2015, despite the large dilution, and accretive to DCF per unit beginning in 2016.

In other words the short-term effects of these latest purchases are neutral in terms of distribution safety. Barring a sharp energy price recovery in 2015, investors shouldn't expect a possible distribution increase until 2016, when the accretive nature of the acquisitions take effect.

Bottom line: Vanguard's new payout is safe but don't expect short-term payout growth
Vanguard has an impressive track record of growing reserves, production, and revenue through acquisitions. In fact since 2008 it's closed 25 deals worth a total of $4.8 billion. However, while the current payout appears sustainable, because these two most recent deals create so much unit dilution Vanguard investors need to be patient and realize that distribution growth is still likely a few quarters away -- assuming energy prices don't decline from their current levels.