Was it a meaningful move or just noise?

What: Footwear company Skechers' (SKX -1.82%) stock bounced 18% higher in May, according to S&P Capital IQ data. The jump put shares at an all-time high; they are up 143% in just the last year. 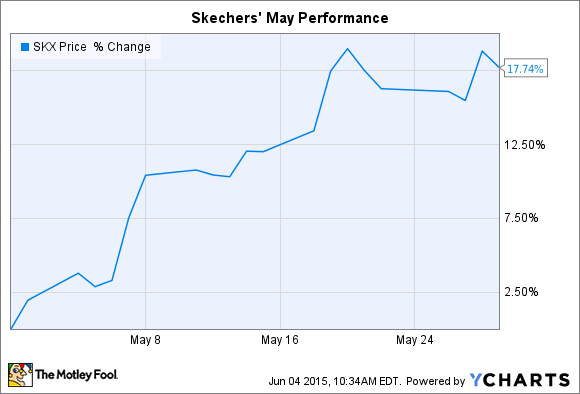 So what: The stock rose as investors continued to digest Skechers' dramatically improving business prospects. The company in late April announced a 41% first-quarter sales jump to a record $768 million. At the same time, profit spiked by 80% to reach $1.10 per share. Both the top- and bottom-line figures handily beat Wall Street's first-quarter estimates. Subsequently, market research firm NPD Group announced that Skechers had blown past rivals Adidas and New Balance to claim second place in the U.S. sports-footwear market, behind only Nike. Skechers' 5% compares to Nikes' 62%.

In a press release, management said the record results were powered by a quickly growing addressable market. "Our expanding product line and marketing focus is broadening our demographic reach," explained CEO Robert Greenberg.

Many of Skechers' new footwear products are resonating with customers around the world, which is why international sales rose by 59% in the quarter. While impressive, global sales still have significant growth potential ahead as they move from the current 37% of revenue to management's 50% long-term target.

Now what: Wall Street sees sales growing by 25% in the second quarter as profits bounce higher by 43%. And Skechers' management is just as bullish about the company's near-term prospects. "We are looking forward to what we believe will be record sales for a second quarter, delivering our back-to-school product, and a new annual sales record. We are comfortable with analysts' estimates for the second quarter, and we see upside opportunity in the third quarter," Chief Financial Officer David Weinberg said in a late-April press release.