Intel has share to take within a growing market.

One of the most impressive stories going on at Intel (INTC 0.79%) today involves the company's data center group. Last year, this business grew 18.2% to just shy of $14.4 billion in revenue, and it delivered a cool $7.39 billion in operating profit. Intel is even forecasting that it will grow revenue in this business by over 15% this year, with operating profit outgrowing revenue growth.

This is a truly great business.

The "big picture" strategy
As part of the presentation, Bryant showed the following slide: 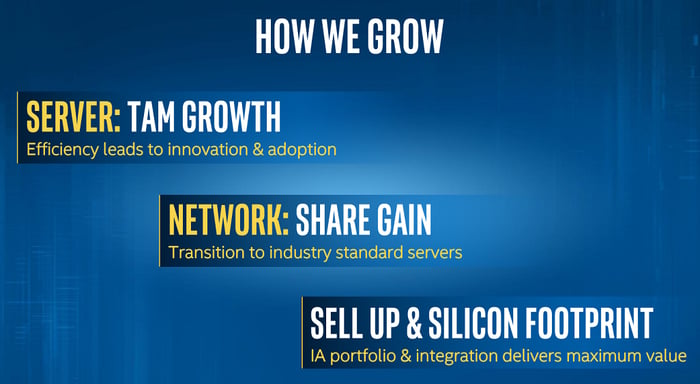 The strategy, in "big picture" terms, is pretty clear: Intel wants to grow its total addressable market in servers (since its market share is so high), grow its market segment share in networking (where its share is fairly low), sell a richer product mix, and grab more silicon content within the data center.

How big is the TAM?
Take a look at the following slide: 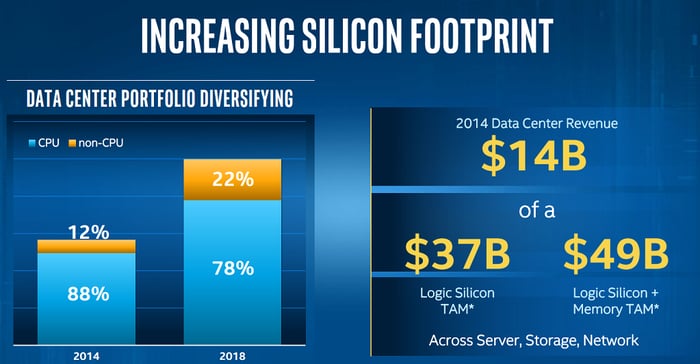 That's actually good news since this implies that there is a lot of room for Intel's high-margin data center business to grow.

The most obvious growth area? Networking
In her presentation, Bryant showed the following very interesting slide, breaking down each sub-segment of Intel's data center business as well as expected growth rates for each segment in 2015: 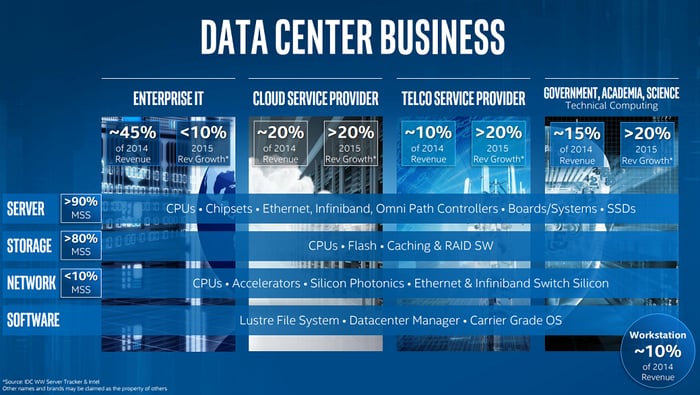 In servers, Intel has "over 90%" share, so Intel really does have to rely on the market itself growing as well as upselling its customers to higher-end, higher-value chips. However, it seems that every end market that Intel serves is growing nicely, which should help.

Interestingly, while Intel has over 90% share in servers and over 80% share in storage, it has under 10% share in networking. The company has been broadening its portfolio in the networking market for quite some time in a bid to gain share.

For example, the company bought Fulcrum Microsystems back in 2011 in order to get into the Ethernet switch market. More recently, it acquired the Axxia networking processor assets from Avago (AVGO 2.25%) (which inherited it as part of its acquisition of LSI) as well as the wireless infrastructure division of Mindspeed Technologies.

I think there's a good chance that Intel will steadily gain share in networking, particularly once it is able to fully assimilate the technologies that it has picked up with all of these acquisitions.

It's not clear if Intel will be able to reach the kind of market segment share that it has in servers and storage, but given the size of this market (Intel pegs it at an $18 billion total addressable market today), bringing market segment share up to 30% (or better) would be a big deal for the company.

This should be a solid business for Intel for the foreseeable future
At the end of the day, Intel's data center business is so attractive because Intel already has a strong position and has plenty of room to grow its share, all in an environment where the underlying total addressable market appears to be growing.

Intel is very smart to invest heavily in this business, and I look forward to seeing what the company has in store here in the years ahead.