Cancer stocks in general have been on absolute fire this year due to the confluence of new regulatory pathways leading to quicker regulatory approvals, as well as a number of stunning clinical successes for traditionally hard-to-treat malignancies.

Despite this rising tide phenomenon, though, the long-term performance of these stocks is undoubtedly going to depend almost exclusively on the fate of their lead clinical products. With this in mind, let's consider why Ariad Pharmaceuticals (NASDAQ: ARIA) and Advaxis (NASDAQ:ADXS) look ripe for a major downside correction, while Exelixis (NASDAQ:EXEL) appears ready to take flight.

Advaxis has all the earmarks of a classic bubble stock
Cancer immuno-therapy company Advaxis has had a monster run-up over the past year, with shares climbing a jaw-dropping 730%. 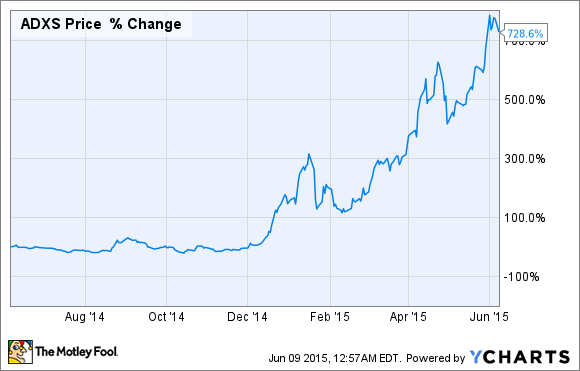 The company's story centers around its novel approach to treating cancer -- a bioengineered bacterium called Listeria monocytogenes. In theory, these modified L. monocytogenes fight cancer by secreting fusion proteins that trigger a powerful and directed immune response against tumor cells.

What sent shares soaring is interest from big pharmas such as AstraZeneca (NASDAQ:AZN) and Merck & Co. (NYSE:MRK), who signed research agreements with the company to investigate the use of Advaxis' platform with their own lead immuno-oncology candidates MEDI4736 and Keytruda, respectively.

So why should you sell this run-up? While a blessing from big pharma is generally a good thing, investors need to understand that Advaxis' novel approach is far from a sure thing. At this point, the emerging clinical trial data have been, well, a mixed bag. And the company has been unable to transform this experimental technology into a commercial product in its 13 years of operational history as a direct result. Put simply, game-changing new cancer treatments rarely, if ever, linger in purgatory for over a decade.

My take is that the strong performance of Advaxis' share price therefore has more to do with a growing bubble in immuno-oncology stocks than its clinical pipeline, shown by the simultaneous rise in companies like Agenus, Kite Pharma, and Juno Therapeutics: 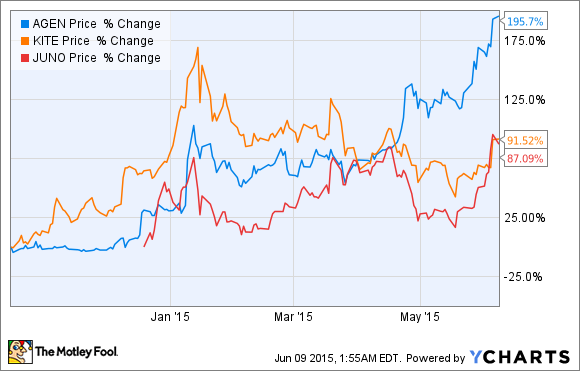 What's key is that this sector run-up is being driven by the broad-based success of Bristol-Myers Squibb and Merck's respective PD-1 inhibitors across a variety of cancer types. However, this doesn't mean that all immuno-therapies will turn out to be effective cancer treatments, and their clinical trial history as a whole shows this to be true, with most flaming out in late-stage testing.

The market appears to be suffering from a case of selective recollection in regards to immuno-therapies in general, but this won't last forever. And that's why you might want to cash in on Advaxis now.

Ariad may never fully recover from Iclusig's revised label
Although Ariad's share price has recovered somewhat after Iclusig was allowed back on the market with a more restrictive label last year, I have a hard time believing the stock can recapture its former glory.

My belief stems from the fact that Iclusig looks destined to remain a treatment of last resort for most CML and ALL patients, severely curtailing its commercial potential. At this point, we are well aware that Iclusig increases the risk of serious cardiovascular events such as fatal heart attacks and bleeding, making it a drug that is probably best suited for patients with end stage disease.

To be fair, the company is testing Iclusig at lower doses in hopes of avoiding these unwanted side effects in its quest to broaden the drug's label, perhaps even to a first-line therapy. But it's way too early to tell how this strategy will play out.

Ariad does have one other important value driver in the works with brigatinib as a potential treatment for ALK+ non-small cell lung cancer, or NSCLC. However, its value proposition is murky, at best, in light of the fact that Pfizer's Xalkori and Novartis's Zykadia are already on the market for this niche-based indication.

And Pfizer doesn't appear to be particularly enthusiastic about this comparatively small market, given that it used Xalkori as a bargaining chip late last year to gain access to German Merck's early stage immuno-oncology assets.

Looking ahead, Ariad is forecasting revenue growth to about $400 million by 2018, up from an estimated $130 to $140 million this year, based on Iclusig and brigatinib's combined sales. As Iclusig may end up having trouble breaking through the $200 million mark with its current label, and the small ALK+ NSCLC market is quickly becoming saturated with new therapies, this revenue estimate looks, to me, to be overly optimistic. That's why I think Ariad is unlikely to make investors that bought back in the $20's whole again.

Exelixis' METEOR trial readout could be a huge catalyst for its share price
Exelixis was one of the worst-performing biotech stocks last year after its lead product candidate Cometriq (cabozantinib) failed to meet its primary endpoint of increasing overall survival in a late-stage study for metastatic castration-resistant prostate cancer called COMET-1.

The stock has rebounded somewhat this year as investors eagerly await the forthcoming results from the so-called METEOR trial, where Cometriq is being pitted against Afinitor as a second line treatment for renal cell carcinoma, or kidney cancer.

The key issue to understand is that the primary endpoint in this late-stage trial is progression-free survival, or PFS. In two pivotal trials thus far for medullary thyroid and prostate cancer, Cometriq has essentially crushed the standard of care in terms of improving PFS. Cometriq's emerging clinical profile, across a number of studies, therefore seems to be that it is great at increasing PFS, but doesn't have much ability to improve overall survival.

So I'm cautiously optimistic that a similar result will be reported for METEOR within the next month or so, potentially leading to a second regulatory approval for Cometriq (it's currently approved as a treatment for medullary thyroid cancer). On the commercial front, Cometriq would only need to capture a small slice of the nearly $2 billion second line kidney cancer market in order to be huge revenue driver for this tiny biotech.

Key takeaways
Advaxis and Ariad may prove to have broadly applicable cancer fighting platforms. But their present valuations reflect perhaps an overly enthusiastic outlook in light of how poorly experimental cancer treatments have performed in mid- and late-stage testing in general.

Exelixis, by contrast, has already been put through the ringer, so to speak, with the failure of COMET-1, and is now looking for redemption in the highly anticipated METEOR trial. Given Cometriq's ability to markedly improve PFS in other forms of cancer, I think there is a better-than-average chance that history will repeat itself in kidney cancer. That's why Exelixis is a great cancer stock to have on your watchlist right now.