Please ensure Javascript is enabled for purposes of website accessibility
Log In Help Join The Motley Fool
Free Article Join Over 1 Million Premium Members And Get More In-Depth Stock Guidance and Research
By Adam Levy - Jun 10, 2015 at 10:42AM

CFO Anthony Noto explains the challenges Twitter faces and how it's answering them. 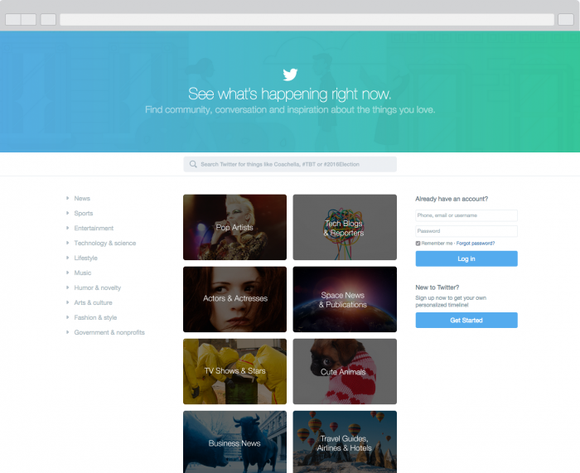 Twitter's new logged-out homepage is key to helping the company grow its user base. Source: Twitter.

The slow growth of Twitter's (TWTR -5.55%) user base has been well-documented, but here's a quick recap. In 2013, CEO Dick Costolo said he expected to more than double the microblogger's users from 185 million to 400 million within the year. The company ended 2013 with 241 million users. Twitter added just 47 million net new users in 2014, ending with 288 million monthly active users. In its most recent earnings report, Twitter said it had 302 million MAUs.

Educating visitors
Twitter says it gets more than 500 million visitors to its website every month who don't sign into an account. That points to Twitter's strong brand awareness via free publicity it receives from other websites and media outlets. Noto said the company has 90% aided brand awareness -- that is, people who recognize Twitter when they see it.

However, Twitter has been unable to turn that strong brand awareness into users. If you compare Twitter's user base of 302 million to that of the largest player in the market, Facebook, Twitter has just 21% of the potential market. Filling that gap between brand awareness and penetration requires answering the question "Why should I use Twitter?"

Noto recently took over as head of marketing at Twitter, and he intends to play a big role in how Twitter is portrayed in the media. Right now, Twitter has high brand awareness, but it doesn't control how people become aware of its product. Exercising more control over this and establishing a brand value proposition are at the top of Noto's priority list.

He said it's important to communicate to potential Twitter users that they don't need to produce content to join. Noto said he wants to focus Twitter on being a consumption-first experience. The revamped home page is a key example of that experience. Instead of asking users to sign up, it provides them with curated feeds of real-time content.

Keeping users around
The second question -- "How do I use Twitter?" -- isn't hard to answer, but it's hard to accomplish. Twitter is best when you've curated a list of users who tweet about things you find particularly interesting. The problem is that curating a list of highly engaging tweeters takes time, and Twitter has done a poor job of assisting users in the discovery of accounts to follow.

Making it easier for users to bridge the gap between following no one and creating a highly engaging timeline has been a focus of Twitter this year. It introduced Instant Timelines, which creates a timeline based on your contacts and who they follow on Twitter. The idea is that if your friends are foodies, you're probably a foodie, too, who's interested in following food-related accounts. It's not perfect, but Twitter said user engagement improved after the company introduced the feature last quarter. The company's @MagicRecs account works similarly by alerting users about accounts that their connections have started following.

Noto said curation is the future of Twitter and that Instant Timelines  and features such as "While You Were Away ..." are just the beginning. Curating more content is key to engaging a wide audience comparable to Facebook's. To that end, the company is investing in machine-learning algorithms to help it surface content for each individual user.

Making it easy for users to find interesting content on Twitter will lead to higher engagement, and Noto believes higher engagement is a leading indicator of retention. Retaining users is just as key to user growth as attracting new users.

Answering these two questions will put ad revenue back on track, too
Not only will answering these questions boost user growth, it will also boost ad revenue growth. Growing the user base naturally impacts ad revenue growth because there are more people to view those advertisements. Getting users to produce more curated feeds enables Twitter to target its ads better. After switching to a cost-per-action pricing model, in which it only gets paid for ads that convert, targeting capabilities are more important than ever for Twitter.