AbbVie's management team had a lot to talk about on their last investor conference call. Here are my three takeaways you need to know when considering the stock for investment.

In January 2013, healthcare giant Abbott Laboratories (ABT 0.58%) made the decision to split itself into two separately traded public companies, keeping its original name and ticker and adding AbbVie (ABBV 1.38%) to the investable universe.

While investors who held on to either company since the split have benefited, as both companies have outperformed the averages, AbbVie has really been a home-run investment and has more than doubled the S&P 500's return over that time period. 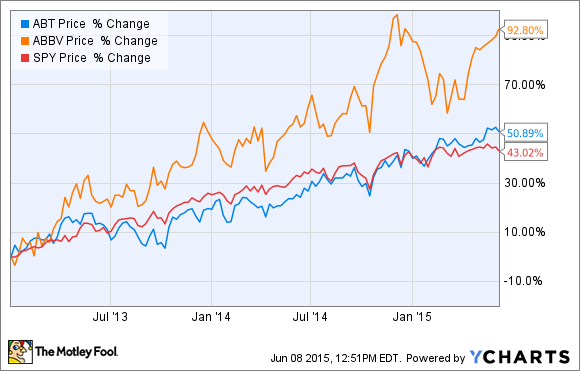 On AbbVie's most recent quarterly investor conference call, CEO Rick Gonzalez had a lot of great information to share with investors. Here are three takeaways from the call that are worth knowing.

1. Pharmacyclics will be accretive by 2017
In March 2015, AbbVie made a huge $21 billion offer to acquire biopharmaceutical company Pharmacyclics in an effort to expand its presence in the oncology market and in particular to get its hands on cancer drug Imbruvica. The deal closed in May and should be a big driver of growth for the company in the years to come. A key benefit of the deal is that it will help to diversify Abbvie's revenue base away from its reliance on their blockbuster drug Humira, which is set to lose patent protection in the U.S. in December 2016 and in the EU in 2018. Here's what management had to say about how the Pharmacyclics deal will impact AbbVie's financial statements in the years to come:

We expect the transaction will be accretive beginning in 2017 and significantly accretive in the years to follow; specifically, as we have outlined, we expect accretion in excess of $0.60 per share in 2019, ramping to more than $1 per share by 2021. -- CEO Rick Gonzalez

2. Humira will drive cash flow for years to come
Blockbuster drug Humira was responsible for producing 63% of AbbVie's revenue in 2014. However, with the patent for Humira set to expire in the not-so-distant future, investors have lots of questions about what the impact to revenue and earnings will be when the patent officially expires. Amgen (AMGN 1.20%) has already made it known that is they consider Humira to be a great candidate for a biosimilar, which is essentially a generic version of a biologic drug. Management, however, is confident that they have hundreds of patents related to the formulation, manufacturing, and indications of Humira, and they will use their intellectual property to defend Humira wherever they can.

As we have said, we expect HUMIRA to continue to drive strong growth and significant cash flow generation for many years. We have a multi-faceted strategy in place which we believe will allow us to protect and grow our immunology position. -- Gonzalez

3. Hepatitis C drug Viekira Pak will be a big contributor to revenue for the year
AbbVie recently launched a hepatitis C regimen, Viekira Pak, in the United States following FDA approval in mid-December. The drug faces some tough competition from Gilead Sciences' (GILD 0.21%) blockbuster drugs Sovaldi and Harvoni, which may make it difficult for AbbVie's treatment to gain traction. First quarter results for Viekira Pak came in at $231 million worldwide, with only $138 million of that total coming from the U.S. Analysts were expecting sales of $236 million in the U.S. alone, so the drug appears to be off to slower-than-expected start.

We are pleased with the pace of our progress internationally, which is tracking ahead of our planning assumptions; this will lead to a higher level of international sales this year than we originally expected. Viekira will be a significant product for us, and we continue to expect an annualized run rate of more than $3 billion in global sales by the end of 2015. -- Gonzalez

Looking ahead, analysts see AbbVie continuing to grow its bottom line over the next five years by more than 14%, which makes the company's forward price-to-earnings multiple of 14 look quite reasonable. When you add in the company's generous dividend, which currently yields more than 3%, I'd say AbbVie looks like quite a compelling investment opportunity.