Please ensure Javascript is enabled for purposes of website accessibility
Log In Help Join The Motley Fool
Free Article Join Over 1 Million Premium Members And Get More In-Depth Stock Guidance and Research
By Matthew DiLallo - Updated Oct 5, 2018 at 11:34AM 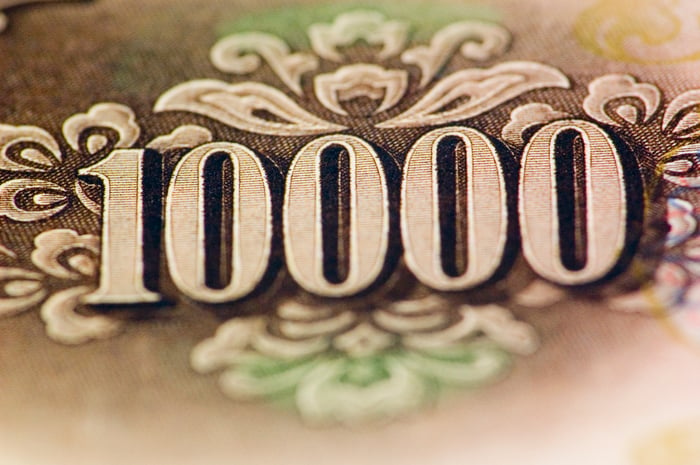 High-denomination bills, like the $10,000 bill, might seem like Monopoly money, but these were once legal tender in the U.S. In fact, the bills are still very much legal tender despite being phased out of circulation several decades ago. However, if you find one of these bills, it's not wise to cash it in at the bank or buy groceries, because the collector's value of the bill is worth far more than its face value when issued.

The history of the $10,000 bill
The U.S. has issued a number of different $10,000 bills in its history, but the most common ones were issued in 1928, when the federal government overhauled its system of printing banknotes. One of the new notes it started issuing was the $10,000 note, which featured Salmon P. Chase.

That few people have probably even heard of Salmon Chase speaks to the rarity of the $10,000 bill. However, Chase served several important roles in the mid-19th century: He was once Ohio's governor and senator, and he served as the Chief Justice of the U.S. as well as Abraham Lincoln's Secretary of Treasury. His job at the Treasury is the reason his face adorns the $10,000 bill, as he was in charge of the Treasury when the federal government started issuing greenback notes in 1861. Because of the role he played in the introduction of modern banknotes, he was honored in 1928 by having his portrait put on the $10,000 bill.

Most $10,000 bills were used to settle large transactions between banks before wire transfers became the safe and secure way to move large sums of money. That said, the bill never gained much traction with the public (after all, who ever has $10,000 in cash laying around?), which is why the bill was phased out as part of the high-denomination currency purge of 1969. Since very few $10,000 bills remain today, its current value far exceeds its face value.

What a $10,000 bill worth today
There are estimates that fewer than 350 $10,000 bills remain in circulation today. Further, there are only eight known 1928 bills known to still exist, two of which are owned by museums. This has vastly inflated the value of the bill.

The bill is a true collector's item, and those collectors are willing to pay dearly for the few remaining $10,000 bills still in circulation. In some cases, a pristine $10,000 bill can be worth upwards of $140,000 on the open market. Meanwhile, bills in poor condition can still fetch $30,000. Suffice it to say, finding one of these is like finding a rare treasure.

Takeaway
While the $10,000 bill was primarily used to settle bank-to-bank transactions, a couple of them made their way into general circulation. However, very few of these bills remain in the hands of the general public. Those lucky enough to stumble across one have a rare treasure on their hands, as it is more than likely worth many times its face value.