Please ensure Javascript is enabled for purposes of website accessibility
Log In Help Join The Motley Fool
Free Article Join Over 1 Million Premium Members And Get More In-Depth Stock Guidance and Research
By Matthew DiLallo - Updated Oct 5, 2018 at 10:27AM

The Carnegie Steel Company was one of the most technologically innovative steel companies in America’s industrial revolution.

Andrew Carnegie wasn't the first man to ever build a steel mill. What he did was seek ways to make the steel mill better, which resulted in the creation of one of the most technologically innovative early steel companies in America. In so doing, Carnegie turn his namesake company, the Carnegie Steel Company, into one of the most efficient steel producing companies of its day, which resulted in tremendous profits flowing into Carnegie's pockets. 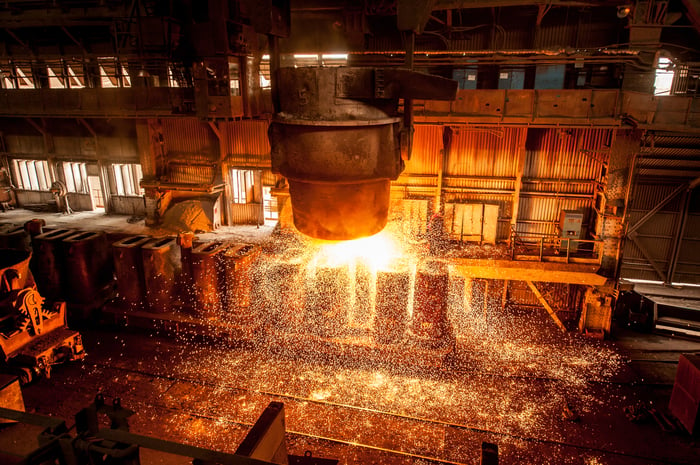 The early days of the Carnegie Steel Company
Andrew Carnegie built his first steel mill, Edgar Thomson Steel Works, in the mid-1870s in Braddock, Pennsylvania, which is just outside Pittsburgh. The mill's plan was conceived while Carnegie was in Europe in 1872 where he learned of the Bessemer process for making steel, which was the first inexpensive industrial process that could be used for the mass production of steel. That first mill was a great success and provided Carnegie with the profits to to buy other mills in the Pittsburgh area, which he combined together to eventually form the Carnegie Steel Company in 1892.

Carnegie also reinvested his steelmaking profits into new technological innovations that would improve the efficiency of his mills. For example, he installed the open hearth furnace system at the Homestead mill in 1866. This process replaced the Bessemer process and made it possible for Carnegie to make steel that was suitable for structural beams and armor plates, which fetched premium prices.

One other innovation Carnegie used was to install new systems that improved material handling, including overhead cranes and hoists, which sped up the steelmaking process and therefore boosted the production capacity of the mills. He was said to be relentless in his efforts to drive down costs and would even have equipment at his mills torn out and replaced if a better technology had been developed would reduce costs and make his mills more efficient.

Efficiency has its price
By solely focusing on efficiency Carnegie's mills were among the most productive in the world. However, that productivity came at a cost, which was the safety of the workforce. Devastating injuries and deaths were an unfortunate common occurrence at Carnegie's mills. Workers weren't provided much in protective equipment and most worked long grueling shifts, which further increased the risk of injury.

With costs in mind, Carnegie was focused on keeping a lid on wages. That resulted in an increase in less skilled workers, which often pushed out skilled unionized workers. Those union workers fought back with the famed Homestead Strike, which was one of the worst labor disputes in U.S. history. However, Carnegie won that battle, dealing an early blow to unions, which kept a lid on his costs.

Carnegie cashes in his chips
Carnegie's cost focused approach made him a lot of money on steel. While some would argue that he was a bit too ruthless in his push for profits, which is why he was among the elite group of businessmen given the label of a robber baron, he built the Carnegie Steel Company into one of the largest steel producers in the country. In fact, it became part of the largest companies of its day in 1901 when Carnegie sold his company to form the U.S. Steel Corporation (X 0.00%). That entity was created by fellow robber baron J.P. Morgan to combine Carnegie Steel with two other steel companies to create the world's largest steel producer, and the first billion-dollar corporation of its time. Carnegie Steel Company fetched $480 million in the sale or about $13.3 billion today after adjusting for inflation with half that cash going directly to Carnegie.

It was money he later used in philanthropy, giving away about $350 million to charities and foundations. It was money that was used to build local libraries as well as to build Carnegie Hall, Carnegie Mellon University, and the Carnegie Museums of Pittsburgh.

Investor takeaway
The Carnegie Steel Company was one of the most innovative steel companies in America because its founder, Andrew Carnegie, saw that innovation was the key to becoming more efficient. That said, the complete focus on efficiency resulted in unsafe working conditions as well as poor wages for his employees, which tarnished Carnegie's reputation. That legacy leaves a great lesson today, which is that while innovation and efficiently are the key to driving increased profitability, companies must not put profits over the safety of their people.