A L.A. Times article caught the media's attention because it highlighted the $4.9 billion in government assistance that Elon Musk has received to build SolarCity (NASDAQ: SCTY), Tesla Motors (NASDAQ: TSLA), and SpaceX. Musk questioned some of the implications that his company needed the assistance to survive, but the staggering sum of money is worth some thought for investors.

Previously, I looked at the figures in the $4.9 billion, and whether Tesla Motors really needs Uncle Sam to survive; today, I'm looking at SolarCity. Could this solar giant even have built a business without the funding it gets both directly and indirectly from the government?

How much money has SolarCity received from Uncle Sam?
To start this discussion, let's look at the subsidies SolarCity has received.

The state of New York is literally building a $750 manufacturing plant for SolarCity, and charging $1 annually in rent. The property's tax avoidance adds to that figure.

The ITC and cash grants are solar subsidies available to everyone, but SolarCity has used them heavily to grow its business, which I'll explain below. It's these tax subsidies that are most important to SolarCity's business now and in the future. It's why Lyndon Rive has lobbied heavily to keep the ITC in place, and has implored competitors to lobby for an extension, as well.

Would SolarCity exist without the government?
SolarCity is the most complicated of Musk's ventures. The company gets an extraordinary benefit from the 30% investment tax credit, or ITC, and of course is getting the free manufacturing plant from the state of New York.

In the first quarter, tax equity investors paid $209 million to SolarCity for the tax benefits that solar systems have off of $407 million of systems installed. Ballpark, that's 51% of a system's cost that goes to tax benefits because, for their $209 million investment, tax equity investors are only owed about $66.9 million during the next 20 years from their investment. Therefore, their primary benefit is tax credits. The figures I've used are below.

Without the tax benefits the government gives SolarCity, its systems would be about twice as expensive for consumers, assuming the same margins for SolarCity. 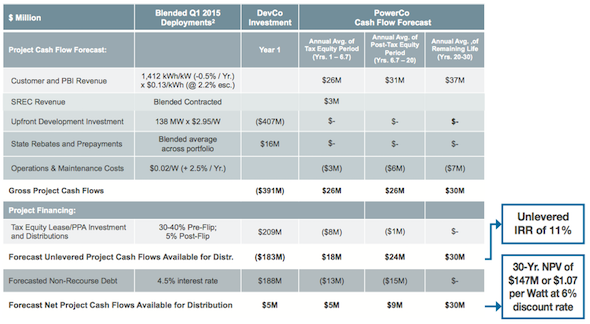 The ITC has made solar competitive against utility electricity prices, but New York's subsidy could give the company a leg up over competitors. The manufacturing plant SolarCity is building in Buffalo, New York hasn't been completed yet; but when it is, SolarCity is expecting to make solar panels that are more efficient than conventional competitors at a lower cost. This, in part, is because the company doesn't have to pay to build the building, or buy the equipment needed for the plant.

If SolarCity's solar panels deliver as promised, SolarCity should be able to garner higher margins than competitors like Vivint Solar (NYSE:VSLR), Sungevity, and Sunrun. In effect, New York could be giving SolarCity a leg up on the competition.

SolarCity isn't the only beneficiary
The New York subsidy is specific to SolarCity, but the way the company uses the ITC isn't. The ITC has helped every U.S. solar installer since it was enacted, and installers like SunPower (NASDAQ:SPWR), who own pieces of the supply chain, use it in similarly advantageous ways.

No one should imply that SolarCity is the only one being made competitive because of the ITC. Everyone who builds solar plants in the U.S. benefits.

The big question for Elon Musk
Where would SolarCity be without government help? Simply put, the company wouldn't exist in the form in which we now know it -- but neither would anyone else in the solar industry.

I outlined above how the government effectively subsidizes about half of the cost of SolarCity's installations through the ITC, and tax benefits like accelerated depreciation. If SolarCity's costs doubled overnight, there's no way it could be competitive in solar leases, loans, or cash sales to residential consumers without losing money.

The great growth SolarCity has experienced during the last five years is because it can offer solar systems for less than the cost of electricity from the grid. But it's beating the grid by pennies, not 50%, so the gap isn't big enough to exist without subsidies.

Residential solar needs the government
From a cost perspective, residential solar energy wouldn't be approaching 1 million rooftops installed without government tax subsidies, and it still needs government assistance to compete with utility electricity prices. The industry is getting close to parity with the grid, but costs have to be lower than $2.95 per watt -- <$2.50 per watt is likely needed -- and retained value will need to come way down from the $1.50-$2.00 per watt in value that SolarCity has typically generated on installations.

In the case of SolarCity, Elon Musk is surprisingly dependent on the government. That may not be the case forever, but for now, his $1.3 billion stake in SolarCity has gotten a huge helping hand from Uncle Sam.