These top stocks make for excellent investments in the growing potash industry.

Investing in a fertilizer company might sound like the most boring idea ever, but one chart tells you why fertilizer stocks belong in your portfolio: 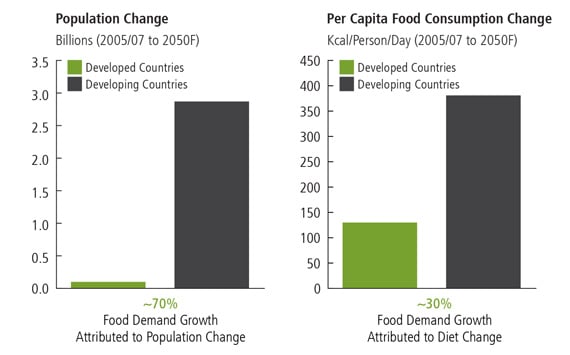 The investing thesis is simple here: A business that provides a solution to one of the world's most challenging problems -- growing enough food for a rapidly rising population -- has immense growth potential. Since fertilizers provide essential nutrients to soil, they're responsible for nearly 50% of the global crop production today.

Among the three key nutrients used in fertilizers -- potash, nitrogen, and phosphate -- potash appears to be the most promising for two reasons. First, while the bulk of nitrogen and phosphate is consumed by China and India, consumption of potash is more balanced across the world. Second, potash's crop usage is also more diverse. That perhaps explains why industry experts peg consumption of potash to grow 3% annually over the next decade, compared to 2%-2.5% growth for phosphate and less than 2% growth for nitrogen. 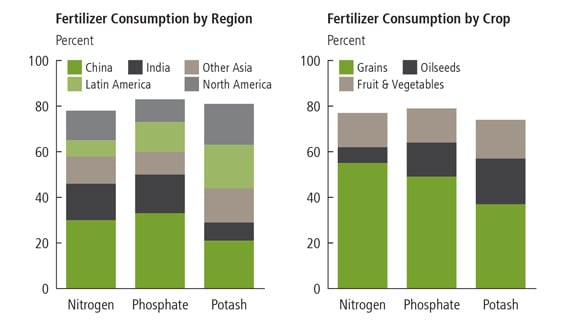 Interestingly, major potash-consuming nations such as China, India, and Brazil, which account for nearly two-thirds of the world's total potash consumption, depend almost entirely on imports. In other words, offshore markets are where the real opportunity lies for potash producers -- which is why PotashCorp (POT) and Mosaic (MOS -0.81%) are top stocks to watch today.

PotashCorp
PotashCorp holds more than a 50% stake in Canpotex, an export association that handles the majority of the potash exported to markets outside the U.S. and Canada. To give you an estimate of what that means, nearly 62% of PotashCorp's potash sales came from markets outside North America in 2014, with 93% of that sold via Canpotex. Naturally, having the biggest seat at the Canpotex table is a huge competitive advantage given that international markets are where the growth opportunity lies.

Investors should also know that PotashCorp is the world's largest potash producer by nameplate capacity. However, Russia-based Uralkali leads the industry by production volume. But that in no way dilutes the investment case for PotashCorp, because the company is already on its way to becoming a global potash leader in every aspect.

Thanks to near-completion of a major expansion program worth nearly $8.4 billion, PotashCorp expects to end this year with nearly 27% higher nameplate capacity. More important, PotashCorp is targeting operational capacity of nearly 17 million tonnes by 2017. In contrast, Uralkali is aiming for annual production capacity of 14.4 million tonnes by 2020. PotashCorp is also reducing its potash manufacturing costs aggressively, which should boost its gross margin further. Potash contributed 54% to the company's total gross profit last year.

With major expansion already completed, PotashCorp's capital expenditure should decline substantially in coming years, thereby freeing up more cash to return to shareholders. From 2005 to 2014, PotashCorp returned a whopping $11.1 billion to shareholders while investing $13.6 billion in capital projects. The company's quarterly dividend alone has grown by more than 11 times since 2007.

In a nutshell, strong growth prospects and an ever-increasing dividend make PotashCorp a top choice in the industry.

Mosaic
Like PotashCorp, Mosaic is poised to capitalize on growing potash demand from international markets, given that it holds a 40.6% share in Canpotex. While the company currently derives only about a third of its sales from potash and the rest from phosphates, potash is the more profitable of the two: Mosaic's potash division earned 31.5% in gross margin in 2014, while phosphates generated only 17.3% gross margin.

In fact, Mosaic is increasingly expanding its low-cost facilities to boost its potash gross profit further. The move helped it cut potash production costs to $112 per tonne last year from $133 per tonne in 2013. The company expects to continue to slash costs, targeting a 17% jump in potash gross profit by 2018, which should be a big boost to its bottom line. 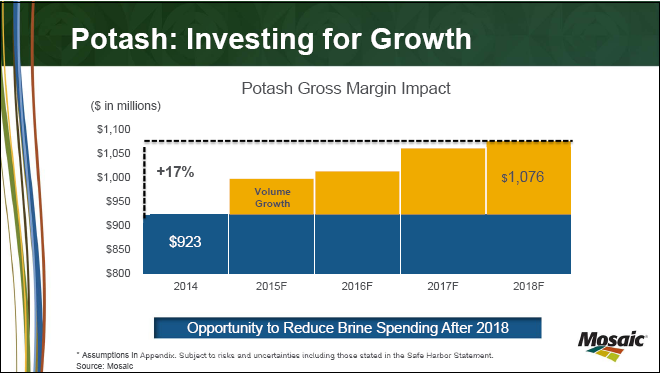 But there's a bigger reason I find Mosaic attractive as an investment: It's among the few companies that generates higher free cash flow than net income. Mosaic earned $1 billion in net profit but generated $1.4 billion in FCF last year. That allows the company good wiggle room to boost returns to shareholders: Its annual dividend grew 450% and it has repurchased shares worth $4 billion since 2011, with $2.8 billion of it coming during 2014 alone.

Mosaic knows potash has good potential, which is why it announced a $1.5 billion production capacity expansion program last December. That could mean greater potash sales, profits, and cash flow for Mosaic, and hence higher returns for investors, in the years to come.