It's been the same song and dance for Caterpillar (NYSE:CAT) and its shareholders over the last couple of years: annual declines in revenue and operating profits, accompanies by a stock price stuck in neutral. In 2012, Caterpillar generated $8.48 profit per share on revenue that reached nearly $66 billion. Fast forward to today, and expectations are for a $5.00 profit per share -- and that's excluding restructuring costs, which would lower the result if included -- on revenue of about $50 billion.

Let's dig into the financials to better understand Caterpillar's executive compensation and to see if growing shareholder dissent is justified.

That's some serious dough
Caterpillar's CEO Doug Oberhelman received a healthy 14% raise in 2014; here's a breakdown of the company's executive total compensation mix and what each segment represents.

An executive's base salary, while still very lofty, is only a small sliver of total compensation, and much of the total compensation comes from other short- and long-term incentives. The ESTIP (Executive Short-Term Incentive Plan) is an annual incentive plan designed to focus executives on year-over-year performance goals, such as increases in market share, revenue, or profit per share as examples. The short-term payments aren't guaranteed, and no payouts are made if the performance thresholds aren't met.

Caterpillar's "longer-term" incentives revolve around equity awards and SPP (Strategic Performance Plan). Equity awards are non-qualified stock options that become exercisable three years after the grant date and expire after 10 years from the grant date. SPP is a three-year performance program with cash payouts based on achieving strategic objectives.

While, in my opinion, those long-term incentives are more near- or medium-term oriented, Caterpillar executives' interest is at least somewhat aligned with shareholders as more than half of their total compensation will likely be generated from owning shares that become more valuable as the business and stock price improve.

Zeroing in on the CEO for a second, how does Oberhelman's total compensation compare to years past, when shareholders approved compensation plans at a much higher rate? 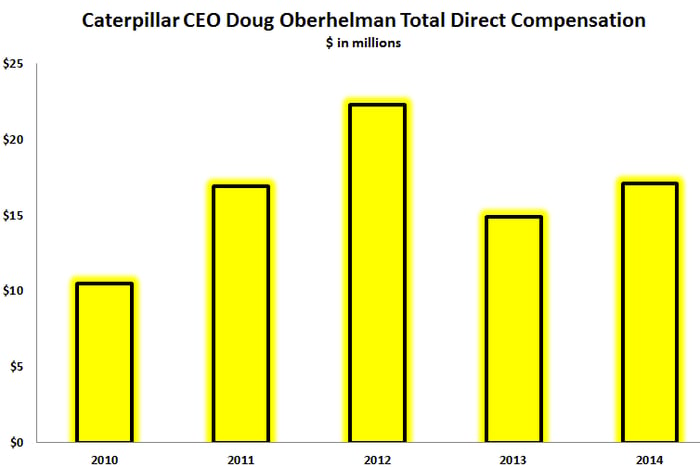 When comparing the compensation mix graphs from 2009 to 2014, don't let the change in color scheme, and the segments the colors represent, confuse you. Equity-based incentives jumped significantly between 2009 and 2014, while long-term incentives (LTCPP in 2009 graph and SPP in 2014 graph) were slashed drastically over the same time period. Further, base salary declined moderately during the same time frame, while short-term incentives (ESTIP) increased moderately.

Shareholder dissent is primarily coming from investors who believe Caterpillar executive compensation is now more tied to short-term incentives driven by earnings-per-share metrics, which can be inflated due to share buybacks. To hammer that point home, of the $5.8 billion that was returned to shareholders in 2014, $4.2 billion of that was through share buybacks, and the remaining $1.6 billion through dividends. If you're a visual person, the graph below will show you how buybacks can inflate profit per share: 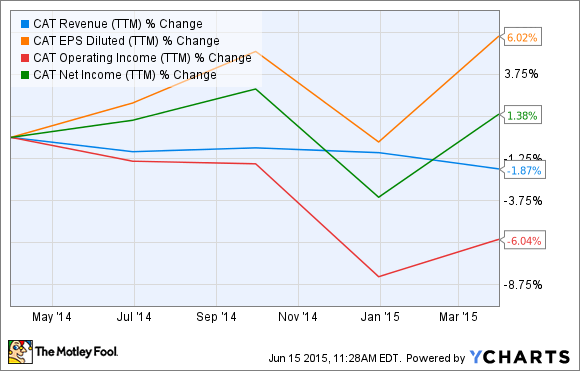 Essentially, you could conclude that the vast majority of the shareholder value Caterpillar is returning to investors is also inflating its profit-per-share to boost executive compensation for short-term incentives. It's understandable that shareholders are growing wary of the changes in compensation mix favoring equity and short-term incentives, all while annual revenue and operating profit are in decline -- not to mention that the stock price has been in neutral.

Ultimately, whether you believe Caterpillar executives are overpaid or not, or that executive compensation is aligned with shareholder interests or not, the big lesson for investors to learn from this article is the importance of cracking open annual proxy statements for the companies they own. These documents have important information regarding executive compensation and what exactly the company is incentivizing, giving investors insight to where the company's business strategy is heading.

Ford, for instance, adjusted its performance metrics to put a larger focus on improving vehicle quality and fewer necessary warranty claims. Shareholders should ask themselves, what exactly is Caterpillar focusing on with its compensation?

Owning companies with proven management is critical for finding market-beating stocks, and knowing more about what makes executives tick is valuable for investors. So, read up on those proxy statements, and thank me later.