Please ensure Javascript is enabled for purposes of website accessibility
Log In Help Join The Motley Fool
Free Article Join Over 1 Million Premium Members And Get More In-Depth Stock Guidance and Research
By Ashraf Eassa - Jun 17, 2015 at 11:45AM

A walk through the life of an Intel manufacturing technology.

It's generally understood that at independent foundries like TSMC (TSM -5.81%), which service a wide range of customers and applications, manufacturing technologies stay in production for a long time. If you look at TSMC's most recent earnings presentation, you'll see that more than half of the company's revenue came from its several-years-old 28-nanometer technology and even older technologies. 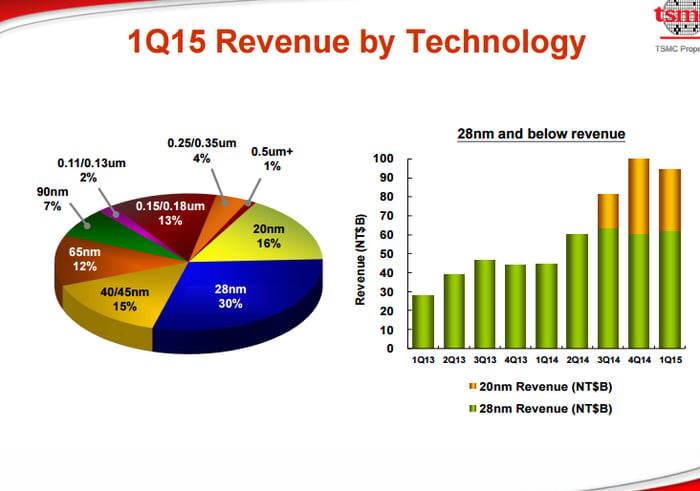 By contrast, Intel (INTC -2.86%), unlike TSMC, primarily services its own products. It generally tries to move its products to next-generation manufacturing technologies as quickly as possible to take advantage of the performance/power/cost benefits of doing so.

So what happens to "old" Intel manufacturing technologies once they're no longer leading edge? Let's take a closer look.

Even though Intel had transitioned away from 32-nanometer designs for PC processors, servers, and low-power SoCs by late 2013, life wasn't yet over for the 32-nanometer process. Indeed, the platform controller hub required for Intel's Haswell platform (introduced in 2013) is built on Intel's 32-nanometer technology.

That means that for every 22-nanometer Haswell processor that Intel shipped, it also included a 32-nanometer auxiliary chip, either on the same package or as a separate chipset on the logic board. The 32-nanometer process is still used today to build the platform controller hub for Intel's current-generation 14-nanometer Broadwell processor.

That's a pretty long useful life
Even once Intel rolls out the Purley platform in 2017, I suspect that it will continue manufacturing 32-nanometer platform controller hubs for Grantley for at least a year after that, if not longer. This means that Intel's 32-nanometer technology will have had a useful life of over seven years, giving us a clue as to how long Intel processors remain viable.

What about the future?
There's an interesting dynamic that I think will come into play within the next few processor generations at Intel. I believe that Intel will eventually -- at least for its low-power notebook processors -- integrate the platform controller hub into the main processor die rather than having it as a separate chip on-package, for power efficiency reasons.

It's not clear whether doing the same thing will make sense for desktop and server processors. But even if this happens just for mobile processors, Intel will lose the volumes that come from laptop/convertible platform controller hubs. This could mean a potential shortening of the useful lives of older technologies, which could mean that Intel will reuse more equipment in going from generation to generation.

That potential loss of trailing edge volume, however, could be offset by increased success in mobile, as well as a transition of connectivity/communications chips to Intel manufacturing technology. In particular, Intel has indicated that it plans to move its modems, Wi-Fi chips, and so on to Intel technology (beginning with the 14-nanometer generation).

The increased volumes from Intel bringing more of its designs in-house might very well prove to be good trailing-edge "fab fillers," especially for cost-conscious market segments.