Ultra-chic airline Virgin America (NASDAQ:VA) had a red-hot entry to the public markets last year. After completing its IPO in mid-November at $23 per share, the stock nearly doubled before the end of the year, peaking at $45.43.

But since then, Virgin America stock has hit the skids. It has now fallen nearly 40% from its high, ending trading at $27.80 on Wednesday. 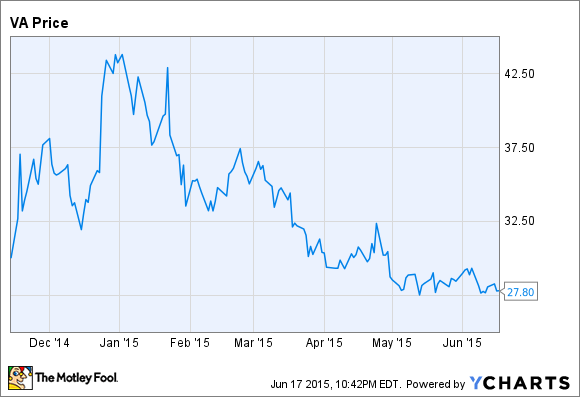 I've thought for a while that this sell-off was overdone. But after United Continental's (NASDAQ:UAL) recent announcement that it is ending service at New York City's John F. Kennedy International Airport this fall and moving all of its transcontinental premium flights to Newark Liberty International Airport in New Jersey, Virgin America stock looks even more like a bargain.

Unit revenue comes under pressure
Beginning in late 2012, Virgin America dramatically slowed its growth in order to become solidly profitable after racking up years of big losses. The tactic worked. In 2013, Virgin America's revenue per available seat mile rose 9.3%, and it followed this up with a 4.6% gain in 2014. As a result, Virgin America's operating margin rose from negative 2.4% in 2012 to 6.5% last year.

However, in recent months, Virgin America's unit revenue has come under pressure. It has built a mini-focus city at Dallas Love Field since that airport opened to long-haul flights last fall, but Southwest Airlines has also grown dramatically there, driving down fares.

Meanwhile, last summer, JetBlue Airways introduced its Mint premium service on the transcontinental routes from JFK International to Los Angeles and San Francisco. This increased the competition for premium customers on Virgin America's two most important routes, pushing down first-class fares. JetBlue has also increased its capacity on both routes, impacting economy fares.

The net result is that Virgin America expects passenger unit revenue to decline 0%-2% in the second quarter, despite a 4% decrease in stage length (the average distance traveled by Virgin America's flights), a change that should be benefiting unit revenue.

Dallas already improving, and New York is next
Virgin America's management told investors in late April that the Dallas market was rapidly absorbing the increased capacity and that load factors had already recovered to normal levels. Fuller planes will allow Virgin America to gradually increase pricing to bolster unit revenue.

Virgin America CEO David Cush also told investors that unit revenue on the transcontinental routes to JFK would improve in 2016 as the market absorbed capacity increases (primarily from JetBlue). But thanks to a recent development, it might not be necessary to wait even that long.

This week, United Continental -- one of the biggest players in the transcontinental market -- announced that it will stop flying to JFK and move all of its transcontinental premium flights to its nearby hub at Newark Liberty International Airport.

While the Newark Liberty airport is only about 20 miles from JFK as the crow flies, most travelers strongly prefer one airport or the other. This means United's exit from JFK will leave plenty of current United customers looking for a new airline to fly from New York to San Francisco and Los Angeles.

As a result, the JFK transcontinental routes to those two California cities could quickly go from being modestly oversupplied this spring to undersupplied this fall. That should drive a strong recovery in pricing. This is particularly important for Virgin America, because it likely gets about 15% of its revenue from just those two routes.

United's exit from the JFK transcontinental market could also give Virgin America an opportunity to add a flight or two there. Cush told me earlier this year that, going forward, the company plans to use about two-thirds of its capacity growth to bolster service in existing markets. That said, the company might have difficulty finding the extra slots it would need to grow at JFK.

A compelling value play
Right now, Virgin America stock carries a bargain-basement valuation. Analysts expect the company to post earnings per share of $4.09 in 2015 and $3.68 in 2016. That means the stock trades for less than seven times projected current-year earnings and a little more than 7.5 times forward earnings.

A return to unit revenue growth and higher-than-expected earnings in 2016 would both be potential catalysts for multiple expansion. That could drive big gains for Virgin America stock in the next year or so.