What do a $900 billion investment fund and coal stocks have in common? Nothing, as it turns out. The Government of Norway recently announced its decision to cut coal out of its nearly $1 trillion sovereign wealth fund, taking divestment discourse to a whole new national level. Here's why.

Norway has cut coal before
Norway is no stranger to divestment. Pure-play coal stocks have suffered mightily in the past few years, and the government had already sold its stake in many coal companies. In 2014, the fund dropped 53 coal stocks, including Peabody Energy Corporation, Alpha Natural Resources, and Arch Coal. When you examine the performance of these three stocks over the last five years, it's easy enough to understand Norway's reason for getting out. 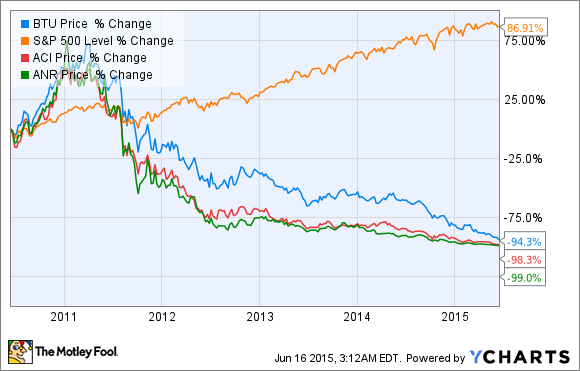 Lead by example
It's difficult for governments to take the lead on much. Almost necessarily, their actions and regulations push along the weakest common denominator as more progressive or predictive non-government actors remain far ahead. When it comes to fossil fuels, key leaders from groups as varied as GreenPeace and Goldman Sachs are all saying the same thing: We can only use a fraction of known fossil fuels before the rest run a major risk of plummeting in value as we necessarily switch to alternative lower-carbon energy sources. One study estimates that a whopping 80% of coal reserves need to stay exactly where they are to avoid the world edging over its international goal of no more than a 2-degree Celsius temperature rise.

Historically, divestment campaigns have been seen as symbolic, rather than affecting real change. But Norway's finance ministry estimates this latest decision will drop around $9.5 billion from coal stocks' coffers.

It's not just public funds, either. Last year, the country's private pension fund divested from 27 coal companies, citing concerns about risk-raising environmental regulation. In May, Bank of America (NYSE:BAC) announced its own divestment strategy. The Bank's version of cutting coal is softer than others' approaches and it didn't release dollar counts on how much this would cost its current coal company customers. Still, Bank of America's $2 trillion in total assets represent a major chunk of change that pure-play coal companies will never have access to again.

There's more to be done

The fine print on Norway's divestment means the government is cutting out companies that currently rely or will rely on coal extraction or energy generation for more than 30% of their business. That means companies like coal-centric utility Duke Energy Corp (NYSE:DUK) are put on the cut list, while more diversified megacoal players like BHP Billiton (NYSE:BHP) and Anglo American cruise past the new coal checkpoint without even a pause.

While divestment is important, it's equally important to consider how best to reinvest. United Nations Secretary General Ban Ki-moon took the opportunity of the unveiling of the UN's latest damning climate change report to remind us that proactive and progressive investments in low-carbon energy are just as important as divestment. Divesting and reinvesting is a simple enough process, and they could reap relatively higher profits than the investments they're replacing.

As individual investors, we have one major advantage over investing companies: We're only accountable to ourselves and our personal timelines. Unlike financial companies, we aren't nailed if we fight through a few bad years, and many of the most progressive investments are ones for which the short-term future is necessarily unclear. In solar energy, for example, the jury's still out on whether decentralized rooftop solar panel kits or utility-scale solar plants (or both) are the way of the future. But we can invest in a bit of both, and even if one goes bust, the other may reap returns in orders of magnitude.

The fact that megafunds and megacompanies like Norway's sovereign wealth fund or Bank of America are putting in place hard and fast rules tells us the days of divestors being painted as anarchist activists are over. Following in the footsteps of these financial giants, and then going one step beyond, is a promising strategy to pull profit for your portfolio.