Please ensure Javascript is enabled for purposes of website accessibility
Log In Help Join The Motley Fool
Free Article Join Over 1 Million Premium Members And Get More In-Depth Stock Guidance and Research
By Reuben Gregg Brewer - Jun 20, 2015 at 7:03AM

BHP Billiton's South32 spin off has gotten a chilly reception, that's bad news for you... or is it?

BHP Billiton Limited (ADR) (BHP 0.33%) has simplified its business by jettisoning some of its smaller operations via a spin off. That's great for BHP, but what does it mean for shareholders? If early trading in South32 is any indication, it might not be such a good thing. At least for now.

Getting small
BHP Billiton is one of the world's largest miners, created by the merger of BHP and Billiton in mid-2001. The idea was to bring together two large and diversified miners to create a portfolio of assets that would weather the ups and downs of the mining industry better than either miner could alone. To some extent it's been a success. For example, despite the deep commodity downturn since 2011, BHP has remained profitable where other miners haven't. 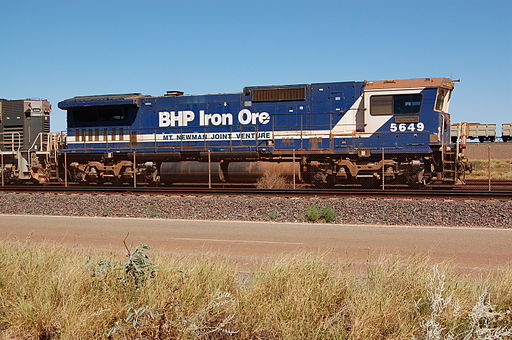 BHP has kept running strong even in a tough market. Source: Bahnfrend, via Wikimedia Commons

However, the company is really focused around iron ore, copper, metallurgical coal, and oil. It's other mining operations didn't contribute nearly as much to the top or bottom lines as this quartet does. So BHP decided to break itself apart, basically reversing a good portion of the merger that created it. South32, as the spin off is known, is now trading in Australia, South Africa, and Great Britain.

Lucky you!
So, now shareholders own the same assets as they did before, but across two different companies. BHP kept its crown jewels and South32 got the other stuff, like thermal coal, aluminum, and zinc. That doesn't make South32 a bad company, but it doesn't make it a good one, either. No wonder the trading has been mixed. After advancing out of the gate, the shares have since fallen back and are around 15% off of their recent highs. And there's good reason to expect them to continue to flounder.

Why is that? For starters, investors like you didn't exactly ask for South32 shares. If you wanted to own BHP for the exposure it provides to its core mining segments, then you probably don't want the other stuff that South32 now owns. What do you do? Sell, of course. That's equally true for institutional investors.

In fact, some institutional accounts may have limitations on the securities they can own based on size, index inclusion, or other factors. For example, South32's American Depository Shares are traded on the over-the-counter market, which isn't always a place that American investors want to be. If South32 doesn't measure up to those internal standards such investors have no choice but to sell. Note that South32 was quickly dropped from the S&P/ASX20, a collection of the largest Aussie companies. Basically, there's going to be a period of adjustment as shareholders who don't want, or can't own, what they forcibly got sell. South32 shares are likely to flounder through this period.

But in that could be opportunity, if you can stomach the near-term turbulence. That's because South32 has some positive attributes. For example, it's a widely diversified and large miner (though not nearly as big as BHP) with a reasonable debt load and ample access to capital. Add in that based on pro forma numbers the company is cash flow positive and earned money last year ($1.93 a share, according to the spin off documentation), it's far from a basket case of unwanted assets. In fact, it could be in a position to grow via acquisition at a point in the commodity cycle that will allow it to buy assets on the cheap.

It will take time for the positive attributes to show through the mining industry's malaise and the perhaps unwarranted stigma of being BHP's dregs. So South32's headwinds are likely keep it in neutral or worse. Before you follow the herd and sell in a knee-jerk reaction, however, take a close look at its business, you might decide that a little short-term turbulence is worth the potential long-term opportunity.