Summer is upon us and that means it's time for vacationers to start looking at summer travel plans. The kids are out of school, many businesses slow down, and the good news for you is that airline prices this summer may make a vacation more affordable than you think.

Whether you want to go across the state or around the world, here are some places that may be cheaper in summer 2015 than you think.

Domestic stops on the cheap
In the last decade, airlines haven't been as healthy as they are right now, and with all of their newfound profits they're looking to expand flights around the country. That means they'll likely be competing with each other more, which is great for consumers because it could result in lower prices almost across the board.

Some of the most popular cities to visit in the U.S. are getting cheaper and the discounts are significant. You can see in the table below from Expedia's (NASDAQ:EXPE) Preparing for Takeoff: Air Travel Trends 2015 that they're expecting the average ticket prices to Dallas (-11.2%), Tampa Bay (-5.9%), and San Diego (-4.6%) to all be down big in 2015. 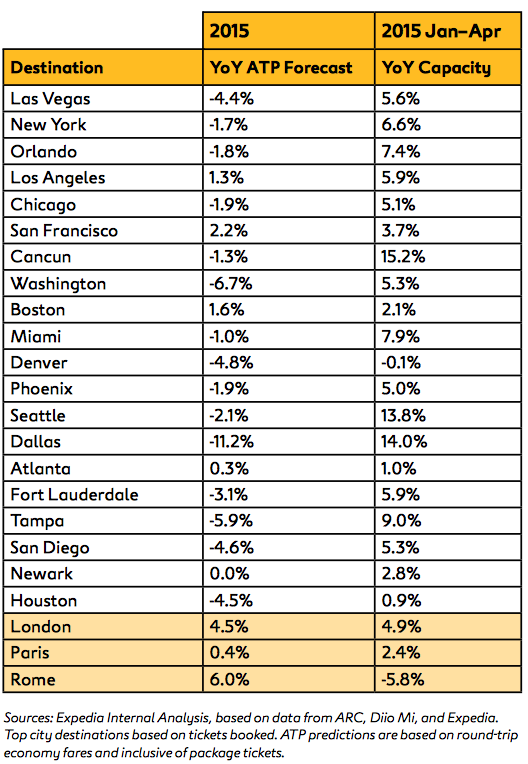 If you're traveling this summer, you can expect prices to likely be lower than they were a year ago. And if you're looking to go somewhere more exotic than these domestic locations, there are lots of deals internationally.

Flying abroad just got easier
Domestic carriers aren't the only ones increasing supply now that profits have returned to airlines. International carriers are doing the same, which makes this summer a great time to travel. Airplane tickets to Rome are expected to be down 12.8% this year and Madrid (-5.8%) and Amsterdam (-4.8%) are seeing large discounts as well. 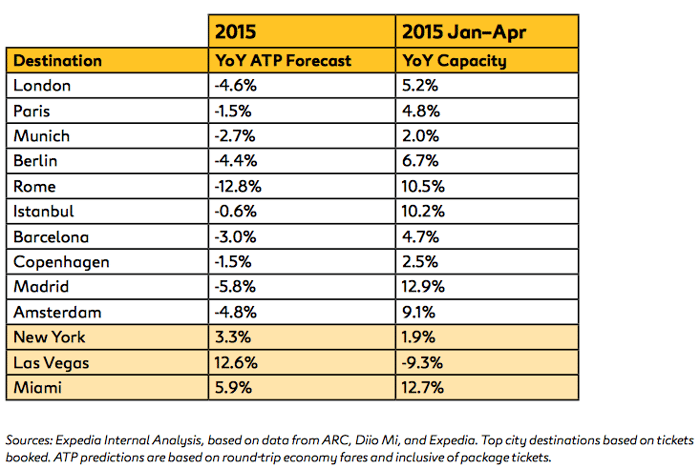 When combined with bundled products like hotels or rental cars the savings can be even bigger. Savings in Rome for a bundled package are projected to be nearly $500, while going to London ($588.55) and even Cancun ($1,031.80) can see big savings as well.

Another thing that's helping U.S. travelers abroad is a strong dollar, which is up 17% against the Euro from a year ago. That means that even after you arrive at your European destination, your dollars will go further on the items you're buying.

Now is a great time to travel
It's a great time to see the country, or the world, now that airlines are fighting for your travel dollars and the number of flight options are increasing. If you're looking for a vacation spot this summer, take a look at some of the locations above that are considerably cheaper than they were a year ago. You may just save a bundle.