The global solar boom that began a decade ago shows no signs of slowing, and by 2020 the amount of solar generating capacity installed worldwide could triple. That's according to new projections from GTM Research, one of the most reliable sources in the solar industry.

The simple fact that solar energy is growing that quickly is astounding, but the reasons for the industry's growth and the drivers are what makes this something everyone should be watching.

According to another GTM Research report, the cost to install solar in the U.S. has fallen 50% since 2010 for residential projects and 67% for larger utility scale projects. This has made the industry competitive worldwide and has changed the drivers of solar growth.

The drivers of solar energy
In early phases of the solar industry's growth, primarily from 2004-2012, installations were driven by subsidies. Germany was the largest solar market for many years because it had a high feed-in tariff (the rate solar owners were paid to generate solar electricity) that made solar systems economical. But solar was driven by this subsidy, not because it was competitive with the grid. 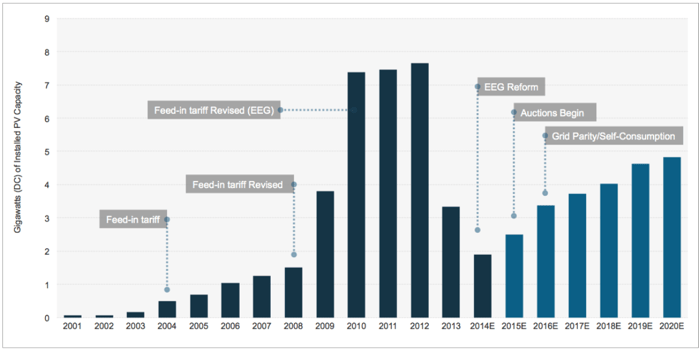 That reliance on subsidies has driven many boom and bust cycles around the world, from Germany (shown in the chart above above) to Italy to Spain. But the drivers are changing and the solar industry is now in less need of subsidies than ever before.

In Chile, SunPower (NASDAQ:SPWR) and SunEdison (OTC:SUNEQ) have both built large solar projects that are selling power straight to the grid at market price, without subsidies. Bids for power purchase agreements in the U.S. have been reported as low as $0.05 per kWh, which is beating natural gas bids and will make solar competitive even after the investment tax credit falls from 30% to 10% in 2017.

According to GTM Research, this market competitiveness will drive continued growth and make solar more stable in the future. The other exciting thing is that it brings new technologies into play for the industry.

Solar-plus is on the way
Now that solar is cost effective, installers can begin focusing on offering ancillary services that will add value to the solar industry. Battery storage, demand response, and smart home integration are just a few of the services companies are working on to make solar a more valuable and reliable source of energy. And they're needed now because solar is becoming a bigger part of the energy picture in places like Southern California.

Cost competitiveness with the grid is going to bring a wave of new solar installations around the world and new innovations surrounding the solar industry that will add value for consumers and utilities. If you're not invested in solar yet it might be time to jump aboard. It looks like there's nowhere to go but up from here.