You can't predict when a recession might come, but you can prepare a watch list for stocks you'd like to own when it happens. Here are two companies I want to own in the depths of a downturn -- companies that should survive through the bottom and thrive on their way back out.

The world's best distressed investor
When it comes to distressed debt, no one does it better than Oaktree Capital (NYSE:OAK), one of the world's leading publicly traded investment managers. Founded by legendary investor Howard Marks, the company's reputation enables it to raise big funds as markets tumble.

It is an edge that is almost impossible to replicate. Think back to 2008. Bear Stearns fell in March. Lehman Brothers crumbled in September. And yet in between these two massive bank failures and the freezing of the credit markets, Oaktree found it possible to raise the largest-ever distressed debt fund, collecting $11 billion of investor capital by May 2008.

This set the stage for Oaktree to go out and buy distressed assets from distressed sellers. It was open season. By some reports, Oaktree was deploying as much as $75 million a day in between Lehman's failure in September and New Years Day 2009. But it wouldn't have happened without the company's reputation as a capable investment manager. Oaktree raised billions of dollars of locked-in capital in an environment where many companies could barely arrange short-term financing.

Oaktree's model is inherently counter-cyclical. When asset prices dive, Oaktree goes on the hunt to raise assets under management. Its new fund offerings generate little in the way of immediate income, and its existing funds take a licking during a downturn, but as time goes on and asset prices recover, it captures a portion of the upside for its shareholders. Its incentive fees are based on a percentage of the fund's return, often after the funds surpass an 8% annual return for the fund investors.

Oaktree sizes its funds based on the investment opportunities it sees. Its May 2008 fund raised $10.9 billion, whereas its second-largest fund since the Great Recession was sized at $5 billion in 2014. Patience pays off when markets turn down. Investors know that when Oaktree is out raising capital, it's because it sees good investments, not because it's on the hunt to grow its fee revenue. 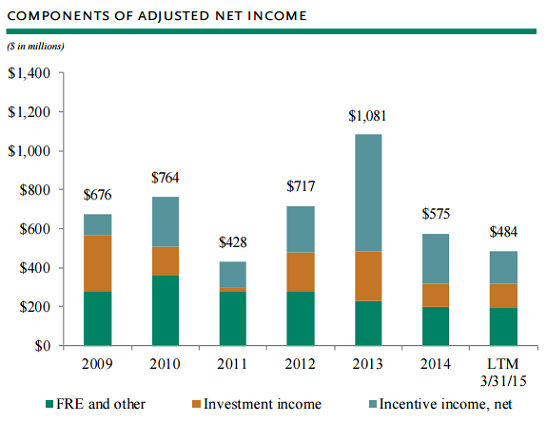 Unfortunately, peak cycle earnings likely came in 2013, when incentive income from gains pushed adjusted net income to roughly $1.1 billion. In 2014, earnings by this preferred measure fell to $575 million, almost entirely driven by lower incentive income from gains in its funds. Growing its income in benign credit markets and in rising equity markets will be difficult to do -- there just isn't much distressed debt to invest in.

But I can be patient. The next recession, like any recession before it, should result in new opportunities and new Oaktree megafunds. I can only hope that Oaktree's shares are depressed, too.

A risk-taking auto lender
Now for a different kind of distressed lender: a subprime auto lender. Credit Acceptance (NASDAQ:CACC) is a pure-play business focused on financing the sale of cars to subprime borrowers. As of the first quarter of 2015, 96.7% of consumer loans assigned to Credit Acceptance were from borrowers with FICO scores of 650 or lower. These are absolutely not ideal borrowers, but Credit Acceptance has historically done an excellent job of pricing its risks.

The company thrives in environments where other traditional automotive lenders have pulled back. The CEO's 2014 letter to shareholders reminds investors of this fact. Brett Roberts describes the period from 1992 to 1997 as being highly competitive, and its loan pools produced results that were "less than our cost of capital" during the period. That's a very candid, very honest assessment. Of course, coming out of the financial crisis, its lending results were exceptional. GAAP net income grew from $1.76 per share in 2007 to $7.07 per share by 2011. Returns on equity exceeded 30% in every year. It had little competition, and dealers were eager to sell cars.

There have been many reports of aggressiveness in automotive lending, particularly in subprime lending. Wells Fargo, often seen as a canary in a coal mine, announced it would put a cap on its subprime auto originations, given new competition. Credit Acceptance has recently extended its loan terms to win business, suggesting it has to forgo some returns to generate sufficient volume.

Credit Acceptance is reserved for my "recession" watchlist for a few reasons. First, at nearly six times book value, its record as a compounding machine has been noticed by the market. Secondly, I'm eager to see how its decision to extend loan terms plays out in a downturn. Finally, its best years are invariably the recession years -- years when no one else wants to lend.

If you, like me, think we're closer to a peak in the credit cycle than a trough, it may pay to wait. I fully expect a recession to challenge the assumptions underlying Credit Acceptance's lending, and thus its earnings. But a company's value rests in its future, not its past. If I can buy a high-quality lender at a temporarily depressed price, I'll be more than happy to do just that.