After decades of zero return, Isis Pharmaceuticals' stock has been on fire recently. Is it smart to jump on board now?

Investing in the biotech industry can be tough, and it can try the patience of the most devoted long-term investors. Even highly promising drugs candidates must clear a huge number of hurdles before generating a penny of revenue, let alone profit. However, if you can find a company that offers a real technological advancement and are willing to stomach a wild ride, you can make some serious coin.

That's right: After more than two decades, early investors who stuck around had no return to show for their loyalty.

However, that changed recently, and since December 2012 the stock has been a massive winner. 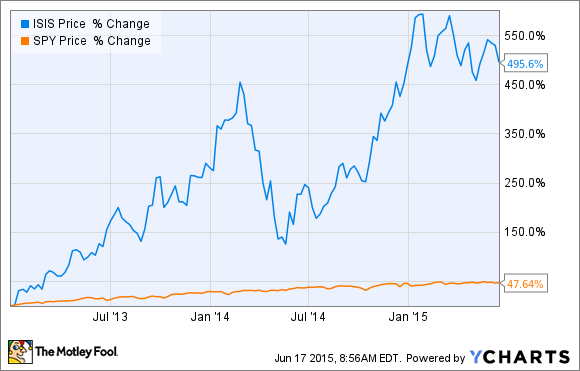 What finally woke up the stock?
Isis has been developing a cutting-edge RNA-targeted technology that is used to inhibit the production of disease-causing proteins. This field is called "antisense", and Isis has created a platform to develop drugs that find and deactivate specific genes in the body as a means of fighting disease.

The platform allows for the development of drugs capable of treating a huge variety of disease states, and it is being used to research drugs focused on a wide range of indications such as cardiovascular, severe and rare diseases, neurological disorders, diabetes, and cancer markets. The company has been developing this technology since its founding in 1989 and is the leader in the field.

The first FDA nod
Developing a drug is one thing, but getting it through the regulatory approval process is another. Isis, though, got some good news on this front recently. Along with partner Genzyme Corp., which is owned by Sanofi, Isis received its first-ever FDA approval in January 2013 for Kynamro, an orphan drug used to treat an inherited cholesterol disorder. Kynamro is a once-weekly injection that works alongside other medication to lower levels of LDL-C, also known as "bad" cholesterol, in the body.

Kynamro itself doesn't appear to be a blockbuster product, as only about one in 1 million people suffer from the genetic disease that the drug is designed to treat. The drug comes with a $176,000 price tag, and it also faces stiff competition from Aegerion Pharmaceuticals' Juxtapid, so market acceptance is far from a sure thing. Kynamro is priced at a discount to Juxtapid, which runs from $235,000 to $295,000 per year, but Isis will have to share up to 70% of the profits on the drug with Genzyme. Also, despite Kynamro being launched in 2013, Isis has yet to see a dime of revenue from the profit-sharing agreement.

But that doesn't matter much for Isis investors, as Kynamro represents an important milestone. Proving that the company's technology is safe enough to get through the FDA is far more important than receiving revenue from its first drug.

A pipeline full of opportunity
Using its antisense technology, Isis has built a huge pipeline of potential drug candidates. The company has 38 drugs in its pipeline that are aimed at treating a variety of huge disease states, with eight of those products in phase 3 development.

Better yet, the company has an extensive list of experienced partners to help finance these drugs' development. Big Pharma players including GlaxoSmithKline, Biogen, AstraZeneca, Johnson & Johnson, Bayer, and Pfizer have all signed up to develop drugs with Isis.

Capital allocation has proven to be a strength of Isis' management team as well. Drug discovery is known for being long and expensive, but the company has largely funded itself through partnership agreements. Since 2007, the company has received more than $1.4 billion in cash from these deals, and it has the potential to earn an additional $8.5 billion in future milestone payments. That number doesn't include other revenue streams that the company's drugs could earn through profit sharing or royalty arrangements if the products prove to be financially successful. When you consider the sheer size and breadth of the company's pipeline, Isis' opportunity appears tremendous.

All for a price
Trying to value any biotech company can tricky, and Isis is no exception. Biotech stocks have been huge winners recently, which has pushed their multiples to nosebleed levels.

One way to look at Isis' value is to view its total market capitalization, which takes the number of shares outstanding and multiplies it by the current share price. 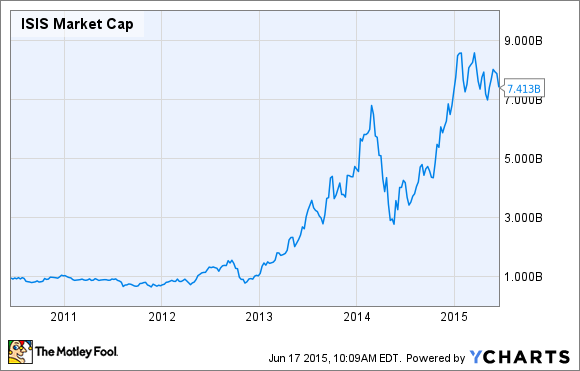 Isis' market cap sits at $7.4 billion, up more than sevenfold since the start of 2013. That's a pretty big business when you consider that analysts only expect the company to generate $297 million in revenue in 2015. However, the company boasts a balance sheet with $695 million in cash and has been cash flow positive for several years, so it is on firm financial footing. If its antisense platform is validated and its huge product pipeline starts turning out blockbuster drugs, revenue could shoot up very quickly.

In the short term, Isis' stock is likely to be volatile and trade up or down sharply on any company announcements regarding clinical trials. However, if you take the long-term view and remember that the company is eligible to receive $8.5 billion in future milestone payments, plus has financial upside through profit-sharing arrangements, taking a small position in Isis now and adding over time could prove to be a profitable decision in the long run.

Brian Feroldi has no position in any stocks mentioned. The Motley Fool recommends Isis Pharmaceuticals. We Fools may not all hold the same opinions, but we all believe that considering a diverse range of insights makes us better investors. The Motley Fool has a disclosure policy.