Solar energy is now so cheap that it's beating fossil fuels, putting it on a path for growth that can't be stopped.

When the SunShot Initiative was launched by the U.S. Department of Energy in 2011, even I thought it was a little crazy to think the goal of $1-per-watt solar energy was within reach. In this article from April 2011, I said that $1 per watt by 2017 had a "fighting chance" at best, but it was a long way off at the time.

Last weekend, First Solar's ( FSLR -1.89% ) CEO Jim Hughes said that $1 per watt is not only on the horizon, but is less than two years away. The government's progress toward achieving $1 per watt by 2017 and having it be a widespread commercial reality by 2020 is well ahead of schedule, and that bodes well for the future of solar energy.

Past the point of no return
The progress in reducing the cost of solar energy shouldn't be lost on anyone. Whether you invest in tech, retail, oil and gas, utilities, coal, or any other industry, this will affect the companies you own. And you're going to want the solar boom to be a tailwind, not a headwind for your business (see: coal over the last five years).

According to GTM Research, the cost of utility-scale solar projects has fallen 67% in the past five years; $1 per watt would be another 44% in the next couple of years. 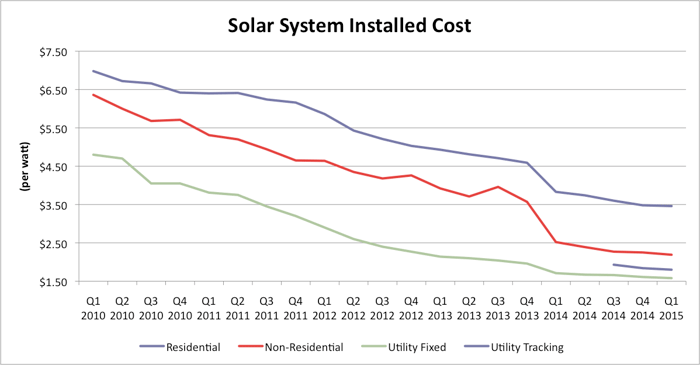 The resulting cost structure is leading to highly competitive prices for solar energy versus fossil fuels. First Solar says that bids for solar projects are now in the $0.04-to-$0.05-per-kWh range, which is less than you can build a fossil fuel plant for, no matter the source of energy.

Since solar costs are beating those of competing energy sources, there are expectations of a boom in demand -- and it's going to be a global solar boom. GTM Research predicts that solar installations will triple to 135 GW annually by 2020. 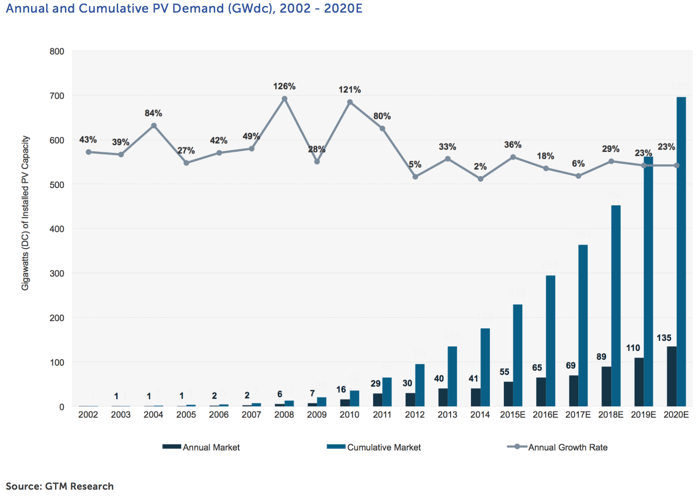 These incredible cost reductions open up new markets in which solar will now be competitive, like Africa, South America, and the Middle East. First Solar, for example, just signed on for a 200 MW project in Dubai that will sell electricity for 5.84 cents per kWh. And that's without subsidies. Solar is past the point of no return in energy, and fossil fuels should be very worried.

The way to profit from solar energy's growth
I've quoted First Solar above, and as a leader in the utility scale solar space, they're a great way to profit from the solar industry. Another great company to look at is SunPower ( SPWR -5.34% ), which makes the world's most efficient solar panels and recently completed the world's largest solar project, the 579 MW Solar Star project in California. Combined, First Solar and SunPower built 39% of the solar plants in the U.S. between 2005 and 2014, and 11% in OECD countries.

For a lower-risk option, First Solar and SunPower recently launched a yieldco called 8point3 Energy Partners to own and operate solar projects. The company intends to pay off cash flow as a dividend, and has long-term contracts to ensure cash continues to come in for years to come.

SolarCity and SunEdison don't make their own panels like First Solar and SunPower do, but they're two of the largest installers in residential and utility solar respectively.

These four companies are the best bets for future growth in solar, and given the competitiveness the industry now has versus fossil fuels, there should be an explosion in demand.

We're past the point of no return -- solar energy will be the biggest new energy source in the future.