Just how much money can a basketball superstar be worth? Miami Heat star Dwyane Wade's net worth is estimated to be over $100 million from more than a decade of lucrative basketball contracts and athletic gear sponsorships. Wade has also taken some interesting risks that could pay off handsomely, or crash and burn.

Let's look at how Wade makes his money. 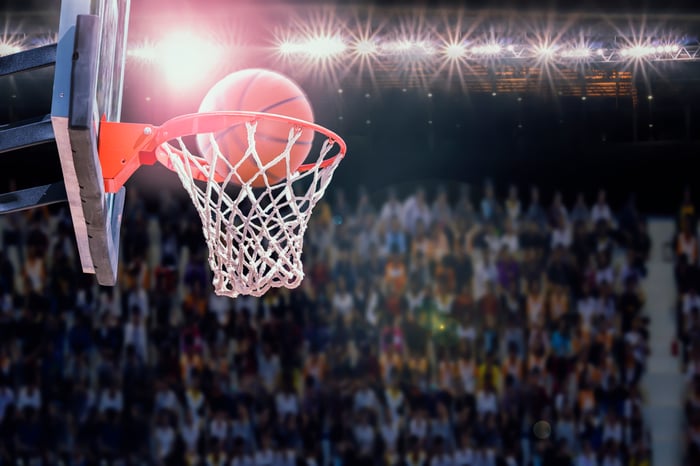 Basketball and massive paychecks
Since joining the NBA in the 2003-2004 season, Wade has made over $136 million playing basketball. His current contract paid him $15 million last season and he's due to make another $16.1 million next season if he opts-in to his player option.

Along with LeBron James, Wade has mastered the art of taking short-term contracts to increase his flexibility and allow for larger annual contracts. In 2014, he signed a two-year, $31.1 million contract with a player option after the first year, setting him up to be a free agent when the soft salary cap increases from $67.1 million to $89 million for the 2016-2017 season. More importantly, the luxury tax, which teams use to sign their own players and certain exemptions over the salary cap, will increase from $81.6 million to $108 million for the 2016-2017 season. That's when the big paydays will come and Wade is set to cash in.

But for all of his accomplishments, Wade was only the 21st highest-paid player in the NBA last year, according to ESPN. He made far less than players like Joe Johnson ($23.2 million), Rudy Gay ($19.3 million), and Brook Lopez ($15.7 million).

That's not reason to feel bad for Wade, though. He's made tens of millions more in sponsorship deals, including a high-profile deal with a sports brand in China.

Dwyane Wade sponsors the world
Over the years, Wade has had sponsorship deals with Converse and Nike, but his biggest deal was with Chinese shoe company Li Ning. In 2012, he signed a 10-year deal with the company few consumers know in the U.S. that will pay him millions annually along with a reported $60 million stake in the company.

It was a high-risk move for both Li Ning and Wade and it's uncertain if it's paying off. Li Ning just reported its third straight year of losses and its stock has gone almost nowhere since Wade signed the deal.

On top of Li Ning, Wade has had slightly less lucrative deals with Gatorade, Pepperidge Farm, Mission, and other brands. In total, Forbes estimates that he made $12 million in sponsorships last year.

Add it all up
Dwyane Wade has made well over $200 million in his career, but after paying agents, managers, and living expenses, his net worth is likely significantly less than that. Estimates of his net worth are between $95 million and $115 million and he has millions more coming in future years.

No matter how you look at it, Dwyane Wade has built a huge net worth and he'll likely add to it in years to come.