Netflix (NASDAQ:NFLX) needs to take a dip into the fantasy genre. Amazon.com (NASDAQ:AMZN) should follow suit. The big movie houses have already squeezed billions of dollars out of this rich genre tradition, so why wouldn't today's most ambitious storytellers want a piece of that action?

Literature has always provided a rich vein of source material for filmed entertainment. In particular, books in the science fiction and fantasy category have become almost automatic hits in recent years. Movies based on fantastic fiction tend to run circles around films cut from more traditional literature.

There's no denying that romance author Nicholas Sparks is a Hollywood superstar, but The Notebook only collected $116 million in global box-office sales. Meanwhile, Veronica Roth's dystopian Divergent series has produced two megahits, each with worldwide ticket sales in the $280 million range.

J.R.R. Tolkien's Middle Earth adventures routinely result in billion-dollar movies. Lions Gate Entertainment (NYSE:LGF-A) has built its reputation on epic sagas like Suzanne Collins' Hunger Games and Stephenie Meyer's Twilight, and I don't really have to tell you about the box office magic created by J.K. Rowling and her Harry Potter franchise.

And that's just the movies. Where would Time Warner (NYSE:TWX) and its HBO division be today without Game of Thrones, based on George R.R. Martin's A Song of Fire and Ice book series? Hoping to catch that wave, Liberty Starz (NASDAQ:STRZA) recently decided to make a premium cable series out of Neil Gaiman's modern fantasy classic, American Gods. After 15 years in development hell, including a stalled production attempt for HBO, the award-winning novel has finally found a producer and distributor.

American Gods is off the table. But there are other options for fantasy fiction that should be made into movies or TV series. Today I'll look at Wheel of Time and how that could fit in the Netflix or Amazon media platforms and business models. (In a future article I'll be looking at The Chronicles of Thomas Covenant, Unbeliever. Check out that article here. ) 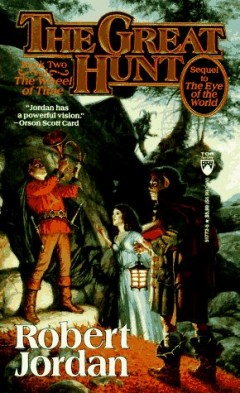 The obvious epic: Wheel of Time
Robert Jordan's vision of a fantasy world at war, as part of a never-ending cycle, is arguably even more epic than Tolkien's Lord of the Rings trilogy. And if the planned seven-volume arc behind Game of Thrones looks like rich soil for an endless TV series, Wheel of Time has it dwarfed with 14 book titles (plus a prequel novel).

In short, this series is larger than life. It's far too big for a traditional movie series in the Lord of the Rings style. It's "big" both in terms of length and depth -- and the existing Wheel of Time fan base would swear off the filmed version in disgust if it was found lacking in nuanced detail. Sword duels must be choreographed like ballet numbers. You should be able to tell a Tairen noble apart from a Cairhienin peer by their dress codes alone.

The series would be much better suited for the small screen, something like a decades-long soap opera, but with more magic and swordplay. The production value would inevitably be compared to the Game of Thrones gold standard, so it can't be cheap.

Currently, the film rights belong to Comcast (NASDAQ:CMCSA) division Universal Pictures. Or rather, the rights sit with independent production studio Red Eagle Entertainment, which originally meant to make either movies or a TV series under the Universal banner.

But Jordan himself found Red Eagle impossible to work with, and his widow isn't getting along with them any better. The company is bending over backward to maintain its production rights.

In February of this year, Red Eagle quietly produced a half-hour scene based on the prologue to the first book in the Wheel of Time series. Featuring quality actors, but a rambling script and terrible production values, Winter Dragon was produced very quickly, and published just days before Red Eagle's license would have expired. And by "published," I mean "aired in the middle of the night on a comedy-focused cable channel, and don't even tell the author's estate about it."

Jordan's widow met that surprise production with an angry statement, and now the two sides are in court to decide where the rights to Wheel of Time really stand. In Red Eagle's view, that was just a teaser to a larger TV series to come. According to Jordan's camp, the production rights have returned home because Red Eagle never actually produced anything under its Universal co-production banner before the license expired.

In other words, it may take years before this valuable asset becomes a TV series. Whether the final show is managed by Red Eagle/Universal or some other production house, this could be the Game of Thrones touchstone for any network not named HBO.

I don't see Netflix paying up for the Wheel of Time rights. The company seems content with Marco Polo, which scratches many of the same itches as WoT or GoT, and has been renewed for a second season. Sure, that's quasi-historical fiction rather than an outright fantasy world, but with all the rich visuals and high-octane swordplay you would expect from a fantasy series.

The series could also expand in many directions, tapping into the intricate world of real-life history. Until further notice, the Italian explorer is likely to shore up the "epic saga" niche for Netflix.

Amazon is a different story. The online retailer's slate of original shows is much shorter than Netflix's, and there's nothing in the same ZIP code as a fantasy-genre drama.

Amazon's pockets are deep, and the company seems intent on building a serious portfolio of original content. The fantasy sector holds far too many eyeballs to ignore for much longer, and a good Wheel of Time adaptation could make Amazon Prime an instant must-see destination for a large and devoted audience.

Again, a bidding war would include nearly every traditional premium cable channel, and maybe even the major broadcast networks. And the license issues won't go away overnight. But I think Amazon could be in the running here, for all the right reasons. And I say that as an Amazon shareholder.