We all want to retire in style, but the key question is whether you have enough money to make that happen. And the fact of the matter is that the typical American is still woefully underprepared for retirement. One number from the Transamerica Center for Retirement Studies annual survey, which I'll reveal below, makes that unhappy fact abundantly clear.

Not that all the news was bad. After all, a plurality of workers in their twenties, thirties, and forties say retirement accounts will likely be their primary source of income in retirement. That's nice to see, because it indicates that Americans don't expect Social Security to fully support them when they retire -- which is great, because that's not what the program is designed for. In fact, the Social Security Administration anticipates that Social Security will only replace 40% of workers' pre-retirement income on average. Meanwhile, it estimates that most people need 70% or more for a comfortable retirement.

In other words, people realize that their savings will play a big role in retirement, many see saving for retirement as their top priority, and the vast majority of people are setting aside money for that purpose. That's a very good thing -- but not good enough.

The readiness issue
Here's the problem: according to the survey, the median household has $63,000 in retirement savings. That's a nice chunk of change, but not nearly enough to retire on. Most people use the 4% retirement rule -- which assumes that you take out 4% of your retirement savings in the first year of retirement, and then adjust for inflation every year after that -- as a proxy for sustainable spending in retirement. If we assume that the rule is accurate, then the median worker would have an annual retirement income from savings of about $2,500.

Of course, you're probably wondering what the age distribution looks like -- after all, what matters is what people close to retirement have in savings. And a separate study conducted by the Federal Reserve on retirement savings in 2013 provides that. 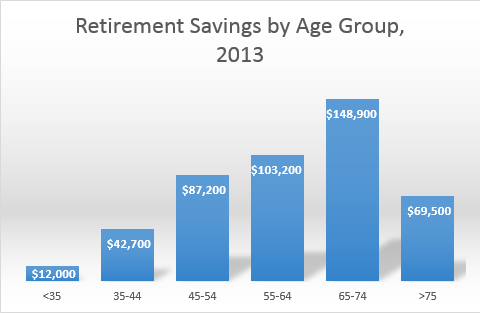 If we assume that the 4% rule is accurate, then the median worker in the 65-74 age cohort -- those who should be either retired or near retirement -- would get about $6,000 in annual retirement income from their savings.

What you can do
But there is hope -- because there's still time.

Pre-retirement, there are some other smart moves you can make to build up that financial fortress.

If you have a workplace retirement plan that you contribute to (for example, a 401(k) or a 403(b)), make sure you contribute at least enough money to get the full employer matching if it is offered. If you aren't taking full advantage of employer matching, chances are good you're leaving more than $1,000 annually in free money on the table -- part of a whopping $24 billion yearly Americans are failing to collect from their employers in 401(k) matching. If you're already there, great. Consider adding a couple more percentage points to your 401(k) from your paycheck -- the contribution limit in 2015 is $18,000, $24,000 if you're 50 or older, so there's probably room to add more. And if it's a traditional 401(k), it's tax-deductible too. Save money and reduce taxes -- awesome.

Also consider setting aside part of your paycheck to automatically go to a separate checking account that you only use to fund an IRA (check this article out for more on IRAs, because you'll want to consider the tax benefits of a traditional IRA versus a Roth IRA). This year your maximum contribution is $5,500 ($6,500 if you're 50 or older), so all you have to do is set aside a couple hundred bucks from each paycheck ($229.17 if you're paid twice a month; $211.54 if you're paid every two weeks) to go into that separate account to max out your contribution. Use the money solely to contribute to an IRA account and otherwise forget about it.

If you don't make enough to do either, consider taking your next raise and funneling it into one or both of these strategies -- and if you have to pick between the two, invest in the 401(k) first, because employer matching is free money. Think about it this way: you're already used to living at a certain income; if your income increases, why not put the new cash in savings so it doesn't get spent? This could make a big difference even if your raise is small: $100 saved per month starting at the age of 35 would grow to over $100,000 by age 65, assuming 7% annual returns (a reasonable assumption based on past stock market performance).

And even if it doesn't feel like there's much (i.e., you're already pretty close to retirement age), there's always the option of working part-time in retirement while you implement some of the fixes I've described. It turns out there are health benefits to working in retirement. A 2009 study in the Journal of Occupational Health Psychology found that retirees who worked part-time had fewer major diseases and in some cases had better mental health. So that's a nice potential win-win: You can have more money and be healthier.

Time and compounding are powerful tools. You can use them to your advantage and retire in style if you make small tweaks to your finances now. Let's all aim for a more financially secure retirement by following some of these simple steps. After all, you've worked hard for your money -- it's time to put it to work for you.