There has always been a small part of me that has felt guilty for not backing up every stock recommendation and investing advice with my own money. The thinking for me is that if someone out there might be making what could be a life-changing financial decision on something that I write or say, then I should have some skin in the game as well.

No other company made me feel that twinge of guilt harder than ExxonMobil (NYSE:XOM).

For several months, I have thought of it as one of a few go-to stocks in the oil and gas industry. But because of the typical everyday things that life throws at us, I wasn't able to scrape together enough money to open a position I thought was enough to justify things like trading fees and whatnot.

Well, I finally put my money where my mouth is and bought shares of the company I have espoused the virtues of owning. A little less than a year ago, I pretty much laid out the reasons why I thought this was the stock to own when compared to its peers, but I thought I would share with you the changes I saw over this time and how they influenced my personal investing decision. I hope that this will help you in your own decision-making.

What has changed
The obvious thing that has changed in the entire oil-and-gas landscape is the big downfall of oil prices, which, as many would expect, has hampered the profitability of just about every company that produces oil and gas. ExxonMobil certainly hasn't been immune to the changes we've seen, but it has held up relatively well, all things considered. Margins and returns have declined, but not by much. In fact, its EBITDA margin of 14.7% is only 1.6 percentage points lower than this time last year.

It is easy to see why this could be a major concern. After all, the reason that shares of ExxonMobil have been so lucrative to own for years at a time is that it returns a ton of free cash to shareholders in the form of dividends and share repurchases. If there is not cash to be had, that can make the value proposition for ExxonMobil go up in flames very, very fast.

If we look deeper, though, this concern may be slightly overblown. The biggest reason for cash flow to swing into negative territory is a $7.5 billion change in working capital. Basically, the company reduced its current liabilities at a much faster rate than its current assets. By contrast, the two companies that did move into free cash flow-positive territory over the past two quarters -- Royal Dutch Shell and BP -- saw working capital swing in the other direction, giving them a more favorable cash position.

The other reason I'm not too concerned with that decline in free cash flow is that ExxonMobil's cash from operations still exceeds its capital expenditures by a pretty wide margin -- about $5.5 billion. As long as it's still cranking out cash from operations in excess of its capital expenditures, I'm not going to fret too much about a couple of quarters of negative free cash flow from working capital changes.

What hasn't changed
While there has been some jostling among the five largest oil and gas companies in terms of production growth outlooks and margins, ExxonMobil has held its production guidance out to 2017 steady. This shouldn't be too much of a surprise since much of the production growth over this time period is coming from projects that are already on line and are ramping up to full capacity, or are ones that began construction a while ago and aren't going to be shut down today because of a drop in oil prices. The one small, interesting caveat is that the company still plans on growing its one segment that could be curtailed rather quickly: U.S. shale oil. 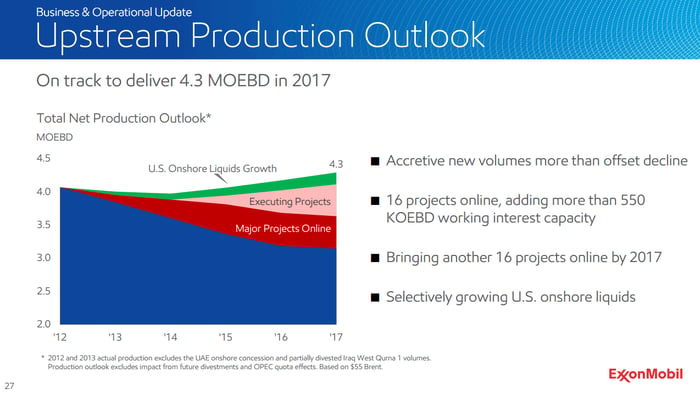 This should be a good sign not only for ExxonMobil but also for the entire U.S. shale production industry as a whole. It means that even though the development cycle for shale oil is short and could be shut down to preserve capital, ExxonMobil still sees favorable economics from shale wells even at today's prices.

The other thing that hasn't changed that keeps ExxonMobil above its peers is that it is still far and away the leader when it comes to profitability. ExxonMobil still maintains a pretty comfortable lead over its peers based on returns on both equity and capital employed. 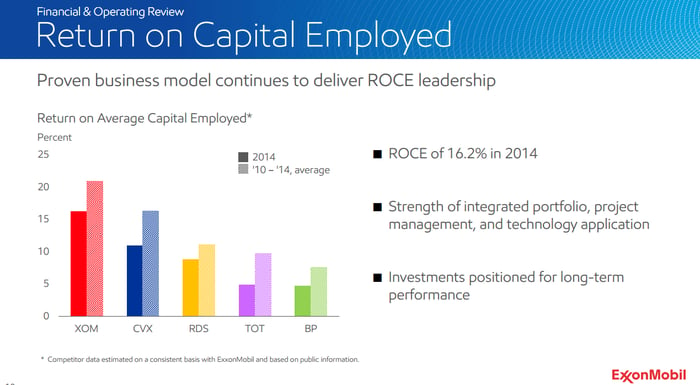 What is even more surprising about those return-on-equity numbers is that of all the companies listed, ExxonMobil has the lowest amount of debt as a percentage of its capital structure. Typically, a company that juices on debt can crank out slightly better returns on equity. But ExxonMobil has turned that traditional thinking on its head because it has repurchased and retired so many of its shares that it has drastically reduced the book value of the company's equity.

As long as the company can continue to generate best-in-class returns while still having some cash from operations left over after capital expenditures, I still see ExxonMobil as the best pick among the big oil giants.

Why now?
Several months ago, there wasn't a whole lot to get excited about when looking at the valuation of ExxonMobil's or any other integrated major's stock, and if you were to look at traditional valuation metrics such as price-to-earnings you wouldn't see a huge change from several months ago. Actually, using any income statement valuation method, ExxonMobil's shares actually trade at a slight premium to its average valuation over the past 10 years.

The metric that stands out today, though, and possibly the one that should be given the most attention, is price-to-tangible book value. The issue with using income statement valuations like price-to-earnings and price-to-sales for a company in commodities is that they are almost entirely a reflection of commodity prices and not as indicative of the value of the underlying assets owned by the company, whereas price-to-tangible book value is more reflective of the value in the company's assets that generate those sales and earnings no matter what the price environment is.

While I would not be completely surprised if its price-to-tangible-book value were to decrease, it appears that shares of ExxonMobil today are at a pretty decent price in relation to the underlying assets owned by the business, and if oil and gas prices were to rise, those underlying assets will translate to better earnings power.

What a Fool believes
Admittedly, a small part of the reason I bought this stock is because of my slight aversion to making recommendations of stocks which I do not own. However, it was not the driving factor for this purchase. I really do like this stock, and I have wanted to make it a part of my portfolio.

While the decline in oil prices has put a pretty good dent in the earnings power at ExxonMobil for the time being, it hasn't really made any structural changes to the company. After all, we're talking about a company that has been around for more than a hundred years and has gone through major ups and downs in the commodity cycle before, and I'm investing my money thinking that it will be able to emerge from this downward price cycle in a great position to profit, as it has done so many times before.