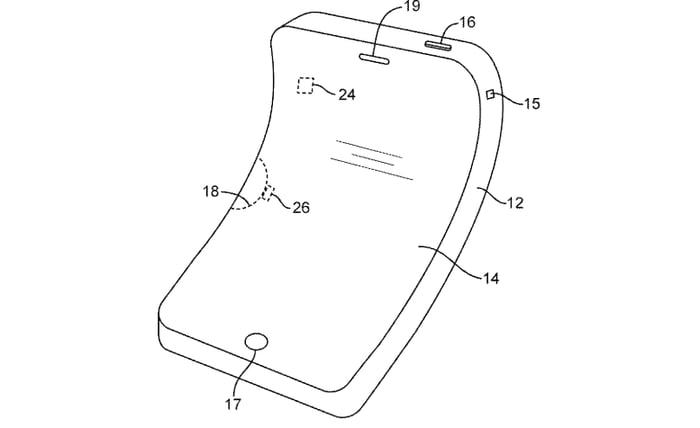 This could be your iPhone in 2018. Credit: Apple, U.S. Patent and Trademark Office.

If the world's leading display suppliers have their way, three years from now Apple (NASDAQ:AAPL) will be using a drastically different display technology than the LCDs you see today in its most popular products. According to industry sources speaking with BusinessKorea, Apple is "serious" about transitioning its flagship iPhone line away from LCD and "to one equipped with organic light-emitting diode (OLED) screens."

In particular, BusinessKorea reported that top Apple display supplier LG Display (NYSE:LPL) intends to shift one of its LCD lines in Gumi, South Korea, to become an OLED line, aiming for mass production in 2017. You might also recall that in January, Apple was rumored to have contracted both Foxconn and Innolux to build a $2.6 billion plant to manufacture OLED displays for both wearables and smartphones. As a result, "It is very likely that the first flexible iPhone may be introduced in 2018," according to BusinessKorea's source.

That would be fantastic -- albeit not entirely unexpected -- news for investors in OLED specialist Universal Display (NASDAQ:OLED), which licenses its OLED IP and sells OLED materials to suppliers including LG Display and Samsung Display. But why specifically would Apple want to switch from LCD to OLED? Here are three of the biggest reasons:

1. iDevice consistency
First, BusinessKorea noted that Apple already uses flexible OLED displays in its new Apple Watch line, with LG Display and Samsung Display as its two primary suppliers. That makes sense, considering that OLED emits its own light and requires no backlight, which in turn allows OLED displays to be made thinner and more power-efficient than their LCD counterparts. Both are crucial to save space and maximize battery life in a small wearable device like the Apple Watch. But Apple could obviously benefit by applying these features to its iPhone line. What's more, while DisplayMate has lauded the OLED display in the Apple Watch as a "very good side-by-side match to the iPhone 6," it's not exactly the same and required some handy engineering efforts to achieve the feat. If Apple transitions future iPhone models to OLED as well, it should enjoy the synergies of scale while also enabling itself to hone its focus on a single display technology for its small and medium-sized products.

But OLED has come a long way since then. According to DisplayMate, "OLED display technology is now challenging and even exceeding the performance of the best LCDs" after a series of systematic improvements over the past five years.

In fact, DisplayMate said recently that Samsung's "Galaxy S6 Basic Screen Mode provides the most accurate on-screen image colors of any smartphone or tablet display that we have ever measured." In addition, the Galaxy S6 became the second smartphone display to ever receive all "Green" (or very good to excellent) ratings in each of DisplayMate's test and measurement categories. The only other display to do so was the OLED in the Galaxy Note 4 late last year.

Considering that Samsung is unlikely to slow its iterations of OLED improvements from here, Apple might have no choice but to adopt OLED on a broader scale as well.

3. Design possibilities
Finally -- and arguably most exciting -- are the design possibilities OLED affords device manufacturers. In addition to being slimmer, more power efficient, and providing better color saturation, accuracy, and brightness, plastic-based OLEDs can be made flexible, semitransparent, and virtually indestructible.

But as the image at the top of this article indicates, Apple is already hard at work developing and patenting its own designs for a flexible, bendable iPhone. That certainly doesn't guarantee that the 2018 iPhone discussed by BusinessKorea will be truly bendable, as many consumers hope. At the very least, however, the first two reasons above should provide more than enough incentive for Apple to make the switch. If that happens, it will arguably cement OLED displays as a central piece of next-generation devices.