Please ensure Javascript is enabled for purposes of website accessibility
Log In Help Join The Motley Fool
Free Article Join Over 1 Million Premium Members And Get More In-Depth Stock Guidance and Research
By Travis Hoium - Jul 5, 2015 at 7:05AM

Oh, how times change. Molycorp was once one of the hottest stocks on the market, and now it's going to be spending a lot of time negotiating the terms of its bankruptcy.

Mountain Pass mine, where Molycorp invested hundreds of millions of dollars before going bankrupt. Image: Molycorp.

It wasn't long ago that Molycorp was one of the hottest names on the stock market. The company went public at $14 per share in 2010 and would soon skyrocket to over $75 per share as rare earth minerals went from an obscure raw material to a topic even Congress was weighing in on. 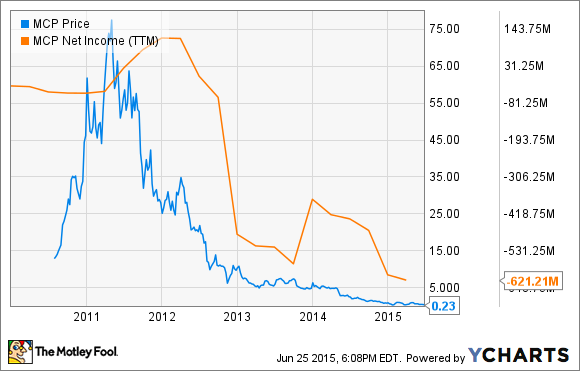 While the market was going crazy over Molycorp's potential, management was building supply for what seemed like an insatiable demand. China was cutting back on rare earth exports to feed its own manufacturing needs, and the price of these obscure metals soared, some by as much as 4,000%. As long as prices stayed high there was nothing that could go wrong.

The fact that they didn't shouldn't have been a surprise to anyone who has taken Economics 101. From the peaks Molycorp reached in 2011 the company has fallen fast and hard, finally filing for bankruptcy yesterday. The reason this company finally folded is a cautionary tale investors can learn from.

The fall of rare earth minerals
Excitement over Molycorp and other rare earth miners or prospectors like Lynas, Rare Element Resources, and Avalon Rare Metals soared in 2010 and 2011, and the excitement was understandable. You can see below that between the start of 2010 and mid 2011 the price of every single rare earth mineral exploded. Prices rose that quickly because demand for rare earth minerals is very inelastic, meaning it doesn't change much as prices change. A small supply cut can lead to sharply higher prices, and at the time China was starting to limit the amount of rare earth minerals it was exporting. The problem was that the rare earth mineral market was still very small, and high prices led miners to plan to increase supply quickly over the next few years.

Below is a chart I included in an article here in early 2011 that shows the problem. At that time, there was demand for about 130,000 metric tons of rare earth minerals globally, and just 50,000 metric tons of product was consumed outside of China, most of which was supplied by Chinese exports. As China cut back on exports prices rose, but there were multiple companies rushing to fill the market need in a big way. These are just a few of the planned mines:

As these plants were completed the market suddenly went from under-supplied to oversupplied. Unsurprisingly, prices plunged (see above).

Be careful what you wish for
Molycorp may not have been forced to file bankruptcy -- at least not yet -- if it hadn't made the challenges I outlined above even worse. In October 2011 its Board of Directors authorized $114 million in additional spending to accelerate the company's production start-up, and management spent most of the money to buy "Phase 2" equipment that would double production to 40,000 metric tons annually.

The company made things worse with acquisitions, like Neo Material Technologies, which it bought for $1.3 billion, including nearly $1 billion in cash. Wouldn't management like to have that cash back right now?

Lessons to be learned
Sometimes markets and stocks that are booming can be intoxicating for investors, but the high doesn't usually last. We saw that unfold for Molycorp and rare earth minerals in general.

Conditions and prices can also change rapidly in markets where demand is inelastic, which is something investors should keep in mind at all times. For Molycorp, the inelasticity of rare earth mineral demand led to the company's rise in 2011 and its fall over the last four years. But the fall was also predictable if you looked at market conditions.

Maybe more important than that, investors should watch how management prepares itself for the future when times are good. In Molycorp's case, management spent money like crazy in an effort to expand when the wise move would have been reducing costs to build a long-term business if prices fell.

Molycorp is just the latest tale of boom and bust on the stock market, but it was fun while the ride lasted. Maybe there's a lesson or two you can take from the market's latest high profile stock gone bankrupt.