Please ensure Javascript is enabled for purposes of website accessibility
Free Article Join Over 1 Million Premium Members And Get More In-Depth Stock Guidance and Research
By Bradley Seth McNew - Jul 5, 2015 at 8:48AM

The growth in hotel lodging in China is staggering; here's how investors can profit from this trend.

The Chinese hotel market is booming. As China becomes the world's biggest leisure travel market by total dollars spent, hotel chains like Hilton Worldwide ( HLT -0.07% ) and Marriott International ( MAR 0.71% ) are eager to claim a greater share of this growing market. Which company looks like the better investment option now?

The growing Chinese middle market
China's middle class is rapidly expanding. According to McKinsey research, by 2022, middle-class citizens will make up 75% of China's total urban population, and the average income for those middle-class families will likely be double its 2012 level. All of this is spurring rapid growth in leisure, travel and activities within China, as well. 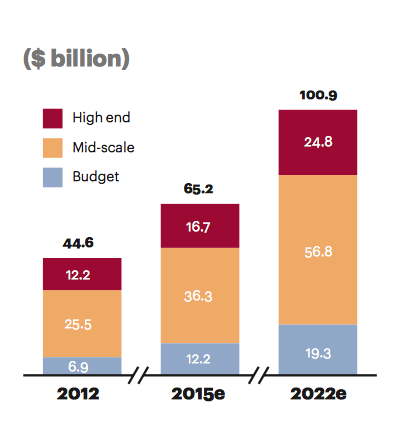 In the past, high-end hotel chains seemed to have the most to gain in China, and they usually focused on international visitors. However, the Chinese hotel market is now moving toward the much larger mid-market segment, and focusing more on Chinese travelers taking advantage of that middle-class expansion.

According to an A.T. Kearney report, the mid-market hotel industry in China could grow another 56% between 2015 and 2022.

The battle for China
Many hoteliers are battling to get in front of this expanding Chinese lodging market. Starwood Hotels and Resorts Worldwide, which owns brands such as Sheraton and Westin, has the biggest presence in China of any U.S. hotel company. It has around 150 hotels in China today and about 130 hotels in its pipeline, but most of its portfolio is geared toward the higher-end market.

By contrast, Marriott and Hilton have more exposure to China's mid-market segment, as well as the largest pipelines for new properties.

Hilton recently added to its expansion in China by opening its first Hilton Garden Inn hotel in North China on June 25. Currently, Hilton offers around 55 properties in China. Last year, Hilton launched its Hampton brand in China through licensing with a local partner, reporting that it expects "hundreds" of Hampton hotels to open in China within five years.

Meanwhile, Marriott currently operates around 85 properties in China. It recently opened a JW Marriott hotel and a Ritz Carlton hotel -- sub-brands of Marriott -- on the island Macau, which is a special administrative region of China. Marriott reported having 245 new properties in the pipeline to open in the broader Asia-Pacific region in the next five years.

While the company didn't announce how many of these properties were planned for China specifically, it's likely that many of them are, as Marriott continues to partner with hospitality schools there to build out new employee development programs.

Marriott hotel next to the Great Wall near Beijing, China. Photo: Marriott

Yet Marriott looks even more impressive with a 28% jump in Q1 EPS year over year and RevPAR up 7% globally. Additionally, Marriott shares are much cheaper at just 29 times earnings compared with 40 times earnings for Hilton. The icing on the cake is that Marriott offers a 1.10% dividend yield while Hilton offers none.

When you factor in that Marriott is the leader of the two in China so far, and the one likely to gain the most from the rising middle market, Marriott looks like the better bet between these two companies.