Investors must remember that oil stocks carry an extra helping of risk.

Over the past year, it's been made clear to investors that there's no such thing as a safe bet among oil stocks, with even the big oil giants having vastly underperformed the market. It's a good reminder that oil stocks are, in fact, risky so let's discuss the three main types of risks they might face.

Commodity price risk
It probably goes without saying that the volatility of oil is a big risk for oil stocks. It's typically one of the first risk factors detailed in the annual report of an oil company. SandRidge Energy's (NYSE: SD), for example, warns its investors in its annual report that:

It's a risk that can have a big impact on the stock price of oil companies. Despite rebounding sharply off the bottom, oil prices are still down more than 40% over the past year, as shown in the chart below: 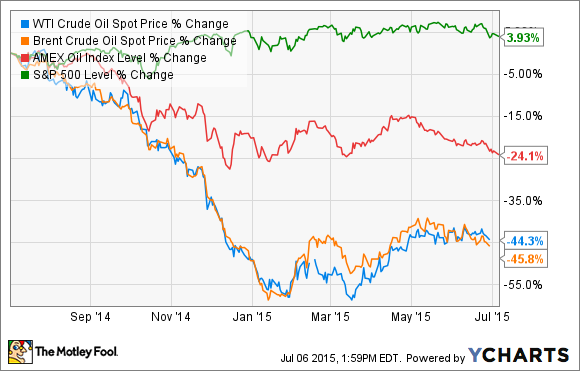 As that chart also notes, the steep drop in oil prices has oil stocks down by about 25% over that same time frame, vastly underperforming the broader market. Clearly, one of the biggest risks facing oil stocks is the price of oil. When oil prices go down, it will take oil stocks with it.

Balance sheet risk
Another big risk facing oil stocks is the balance sheet. It is why SandRidge Energy, Halcon Resources (HK), and Energy XXI (NASDAQ: EXXI) are all down more than 85% when the average oil stock is only down about 25%. All three companies are crumbling under the weight of the billions of dollars in debt they borrowed over the past five years to fund growth during the boom years, as we can see in the chart below: 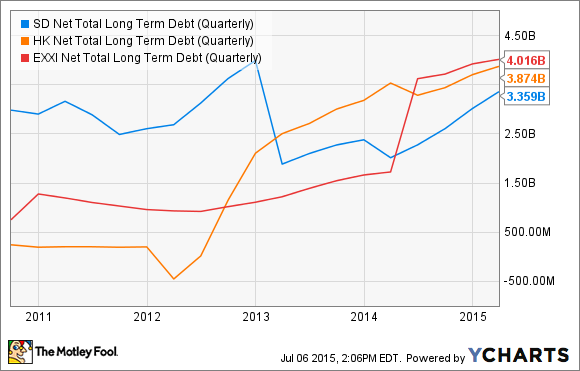 Having a weak balance sheet can impact an oil company in a number of ways. The most obvious is the fact that it can be forced into bankruptcy, a key worry among these three oil stocks. However, another issue is that a weak balance sheet can pressure a company to raise cash in ways that might not be in the best interest of shareholders. We are seeing this at Energy XXI, which recently sold its Grand Isle Gathering System for $245 million and the oil-rich East Bay field for $21 million as it sought cash to improve its balance sheet. These are sales at the bottom of the market that Energy XXI really had to make to raise cash as opposed to sales being made to cash out on assets at the top.

Meanwhile, Halcon Resources entered into a debt-for-equity swap with some of its bondholders in order to cut debt. Not only can exchanges like this be viewed by rating agencies as a distressed exchange, but this particular exchange was highly dilutive to Halcon's investors.

Environmental risk
A third risk with a big impact on oil stocks is environmental. Oil spills, as we know, can cause a lot of environmental damage and require billions of dollars to clean up. Meanwhile, future environmental regulations could slow down or even stop drilling in certain areas, which could have a significant impact on certain producers. For example, SandRidge Energy faces a number of environmental risks that threaten to slow down future growth. In its annual report, it highlighted the fact that "the recently listing of the lesser prairie chicken as a threatened species under the federal Endangered Species Act may serve to delay or limit the operations of the company" as it could limit its ability to drill in certain areas during its breeding and nesting seasons.

In addition to that, a recent spike in earthquakes in Oklahoma has been linked to saltwater disposal systems, which are key to SandRidge's operations. If regulators prevent SandRidge Energy from using its disposal system, it could add to its well costs at a time when the company is doing everything it can to further lower its costs.

Investor takeaway
Oil companies face a lot of risks, but the three types that impact investors the deepest pertain to price, balance sheet, and the environment. As we've seen with SandRidge Energy, Halcon Resources, and Energy XXI, these risks can tank an oil stock, especially if it's hit by more than one at the same time.

Matt DiLallo owns shares of SandRidge Energy. The Motley Fool has no position in any of the stocks mentioned. Try any of our Foolish newsletter services free for 30 days. We Fools may not all hold the same opinions, but we all believe that considering a diverse range of insights makes us better investors. The Motley Fool has a disclosure policy.