Please ensure Javascript is enabled for purposes of website accessibility
Free Article Join Over 1 Million Premium Members And Get More In-Depth Stock Guidance and Research
By Jason Hall - Jul 8, 2015 at 8:07AM

What: Ultra-deepwater offshore oil and gas drilling operator Ocean Rig UDW ( ORIG ) stock has been on a roller coaster since the beginning of the year, but since mid-May, it's been all downhill: 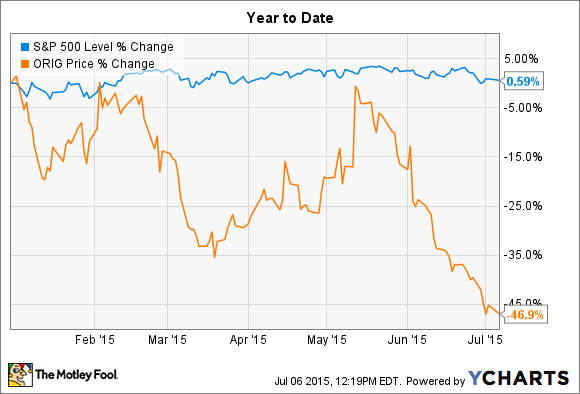 So what: As an offshore oil driller, Ocean Rig UDW's stock will ride the ups and downs of oil prices as well as be affected by any material news from its industry peers and competitors. And frankly there wasn't much news last month, and what there was, wasn't positive. Definitely the biggest news for Ocean Rig UDW was the secondary stock offering the company made, selling 28.6 million new shares to raise $193 million in cash.

Added to the 132 million shares already outstanding, that diluted existing investors' ownership of the company by 21%, and this was undoubtedly the biggest driver behind the decline in the company's stock price.

Now what: Like its offshore brethren, Ocean Rig UDW remains exposed to the risk of weakening oil demand, and still-increasing onshore production putting further pressure on offshore drilling demand, further pinching day rates. With that said, Ocean Rig UDW's relatively small fleet is pretty high-spec, and of its 10 vessels in operation, only three have contracts expiring before the first quarter of 2016. And unlike drillers like Seadrill, Ltd., which has pretty heavy exposure to newbuilds that will have to be paid for over the next several years, Ocean Rig UDW only has three new ships on order, and they aren't scheduled for delivery until mid-2016, early 2018, and early 2019.

However, the company hasn't been free cash flow positive since mid-2013, and has used debt and share offerings to generate cash. As long as oil prices stay down, there is a very real risk that day rates -- the amount the company can charge oil companies for the use of its vessels -- could continue to decline, and as we've seen with Seadrill, contract cancellation and re-negotiations at lower day rates are possibilities as well.

In summary, Ocean Rig UDW's fleet looks to be solidly under contract, but the company's consistent negative free cash flow, and the use of share offerings to cover the shortfall, could continue to weigh on shareholder returns, and this could be compounded by a protracted cheap oil environment. There's a lot of upside if and when oil demand and prices eventually shift, but there's certainly risk of losses between now and that happening. As much as shares are down since last year, they could certainly fall further.