What: Shares of Smith & Wesson Holding Corporation (NASDAQ:SWBI) climbed 13% in the month of June, according to S&P Capital IQ data. As of this writing, the gun maker's stock has risen an impressive 74% so far in 2015, trouncing the S&P 500 in the process. 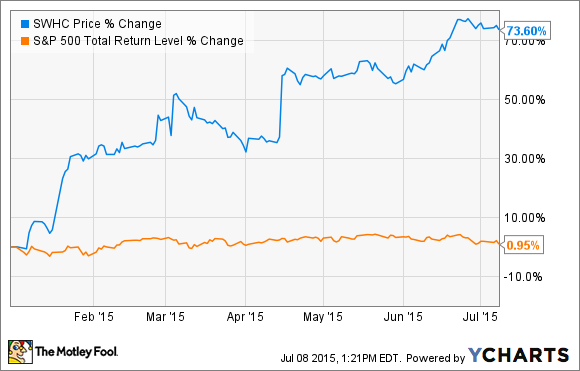 So what: Smith & Wesson's gains early in the month came as several analysts issued encouraging notes ahead of its June 18 conference call. On June 1, for example, Vetr issued a note upgrading the stock from sell to hold, simultaneously issuing a per-share price target of $17.50. And on June 11, Wunderlich analysts reiterated their buy rating on the stock, and assigned a $19 per-share price target -- still well above Smith & Wesson's current trading price around $16.40 per share. Both calls also kept in mind current broad strength in the firearms industry, backed up by Smith & Wesson's strong results in the previous quarter ended April 30, 2015.

What's more, Smith & Wesson followed up on June 25 by announcing its board has authorized a new $50 million stock repurchase plan, good through June 23, 2017. Based on today's prices, that amounts to roughly 5.7% of Smith & Wesson's current float.

Now what: There's no guarantee that Smith & Wesson will be able keep rising from here, especially considering firearm sales tend to ebb and flow along with the public's opinion of gun ownership versus gun control at any given time. But investors should also keep in mind Smith & Wesson's recent acquisition of hunting and shooting accessories specialist Battenfeld technologies, which should provide the company a more steady revenue stream going forward even if actual firearm sales falter. In the end, with shares of Smith & Wesson currently trading at a reasonable 18.3 times trailing 12-month earnings, and 14.3 times next year's estimates, I think investors would be wise to continue holding the stock despite its recent gains.