What: Shares of online retailer Wayfair Inc (NYSE:W) were looking stylish in June, climbing 26%, according to data from S&P Capital IQ. 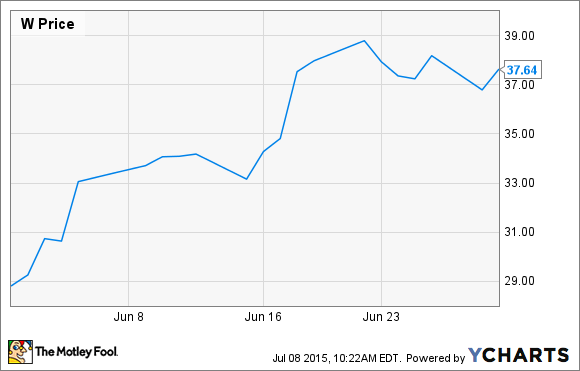 So what: The gains for the home furnishings seller appeared to be the result of a short squeeze as short sellers rushed to close out bets against the stock, and the increase in share-buying pushed the stock price higher. The gains were primarily due to surges on the third, fifth, and 18th of the month when the stock gained 5%, 8%, and 8% respectively. There was no major news out on the company during those days, or during the whole month for that matter, but with 52% of shares sold short, that upward momentum is likely to lead to further short-covering.

Wayfair IPO'ed last October, and its shares quickly fell by more than half as the company is putting up significant losses, and newly public companies tend to be erratic stocks. However, shares have nearly doubled since the beginning of the year, and the stock is now near its opening-day high, aided by a strong fourth-quarter report that saw the stock rocket 14% in one session.

Now what: Wayfair is putting up sizable losses at the moment, but much of that is due to substantial increases in spending on advertising, operations and technology to boost awareness and its own capabilities. Prior to its IPO, the company had been losing money but only at a margin in the single digits.

Amazon.com has shown that profits aren't necessary to make a blockbuster stock out of an e-commerce company. Strong growth and sustainable competitive advantage are enough; investors are content to wait for profits.

Wayfair is in a much different stage of life and is much smaller, headed to near $2 billion in sales this year, but the growth is there and the company seems to be successfully building a brand in a niche that is outside of Amazon's strengths. Based on its price/sales ratio, the stock is modestly valued at 2.1. Wayfair has crushed revenue estimates in its first two quarters as a publicly traded entity. If it can continue to do so and move toward profitability, the stock should go even higher.