A market adjustment is coming sooner or later. When that happens, names such as Jack in the Box, Baidu, and Starbucks are great candidates to consider buying.

We have bad news for you: The stock market is going to turn south sooner or latter. Bear markets happen from time to time, and there is just no way to avoid or predict them with any precision. On the other hand, that's not necessarily a bad thing, since falling stock prices can provide a great opportunity to purchase top growth stocks at attractive valuation levels.

With this in mind, we asked our contributors to share with us some promising candidates to buy in a bear market, and names such as Jack in the Box ( JACK 5.79% ), Baidu ( BIDU 2.30% ), and Starbucks ( SBUX 2.95% ) came out as particularly strong companies to keep on your shopping list.

Bob Ciura (Jack in the Box)
The growth stock I'd love to take a bite out of if the market crashes is Jack in the Box. The burger and burrito company is on a tear; the stock is up 54% in just the past one year. Of course, this is because the company is growing at a torrid pace.

Source: Jack in the Box.

Jack in the Box also pays a nice 1.2% dividend, and as the company grows, its dividend gets fatter. Jack in the Box jacked up its payout by a whopping 50% after reporting last quarter's earnings results.

Still, Jack in the Box's valuation gives me a bad taste in my mouth, which is why I'd love to see a market downturn so I can scoop up shares of this excellent company at a better price. The only issue I take with Jack in the Box is its valuation, which is admittedly aggressive. The stock trades for 35 times trailing earnings per share and 25 times forward EPS estimates. These are very lofty levels, and they don't present an attractive enough risk-reward proposition to warrant investment at this time.

But if the stock comes down and its valuation becomes easier to swallow, I'd buy this stock.

Brian Stoffel (Baidu)
The parent company of China's leading search engine has seen shares fall almost 30% since late 2014. But while some investors worry about the potential for a Chinese swoon, and others are focused on the fact that revenues are growing faster than earnings, long-term Fools are taking the chance to buy a solid company at a compelling valuation.

After worries that Baidu wasn't focusing enough on mobile three years ago, the company recently completed a remarkable transition, with mobile revenues eclipsing desktop starting in December 2014. But that transition wasn't cheap, and revenue growth has far outpaced net income for the past three years. 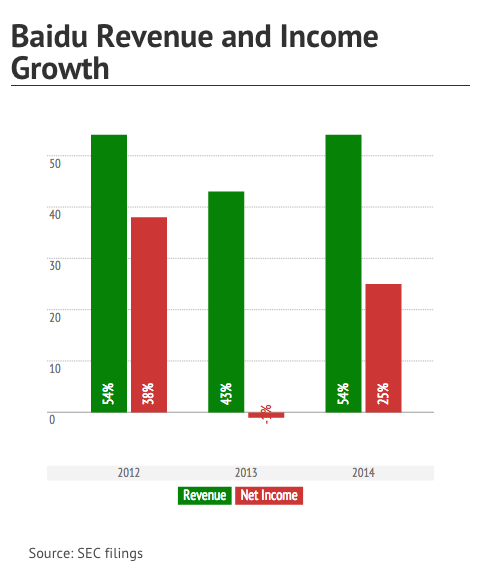 But now is not the time to be optimizing profits. Hundreds of millions of Chinese consumers are coming online, and many of them are doing so on mobile devices. If Baidu wants to continue capturing significant market share of this growing pie, spending lots of money right now is the right long-term move.

At the end of the day, Baidu is now trading for just 27 times forward earnings. While that may sound expensive, I think it's a compelling price for a company actually seeing accelerating revenue growth.

Andres Cardenal (Starbucks)
Starbucks is simply one of the strongest and most dynamic consumer growth stories in the market, and everything suggests the company will continue delivering rock-solid financial performance over the years ahead.

With more than 22,000 stores in 67 countries, Starbucks is an undisputed leader in its industry. While scale and high market penetration typically reduce growth rates, the company continues enjoying extraordinary performance. Total revenue grew 18% during the last quarter, while operating income jumped by an even stronger 21%. Global comparable sales grew by a vigorous 7%, so customer demand is looking remarkably healthy.

The company is planning to open 1,650 new stores during the current fiscal year, and menu innovations are driving sales growth at the store level. Starbucks also gained over 1.3 million My Starbucks Rewards members last quarter, bringing the total member base to more than 10 million active members and proving that customer loyalty is off the charts.

On the other hand, Starbucks is priced at a considerable premium versus the overall market, and the stock carries a P/E ratio of over 30 times earnings for the last year -- nearly 50% above the S&P 500 index, which is trading at a P/E ratio around 19.

The company clearly merits an above-average valuation because of its exceptional quality and growth prospects, but these valuation levels can be a drag on potential returns in the middle term. For this reason, I believe a market adjustment could provide a big chance to buy such a remarkable business for a more convenient entry price.